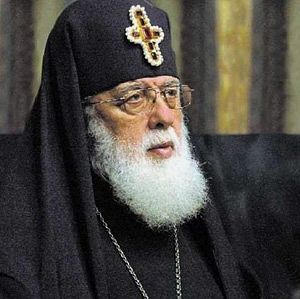 There are currently 150 mosques and 300 madrassas in Adjharia while the number of Orthodox Churches is not more than 40, reports the newspaper AkhaliTaoba (“New Generation”).

Given such statistics, the Patriarchate of Georgia will not support the building of a new mosque in Batumi, the source summarizes.

On the evening of March 30 a meeting took place at the residence of the Patriarch of Georgia. Catholicos-Patriarch Ilia II received the Turkish Foreign Minister, Ahmet Davutoglu, who was on a visit to Georgia, and the Georgian Prime-Minister, Bidzina Ivanishvili.

According to the “Facebook” posting of Henry Dolidze, the President of The Orthodox Patriots’ organization “Kavkasioni”, the meeting was dedicated to restoring the Georgian cultural heritage in the region of Tao-Klarjeti, which now belongs to Turkey, and building a mosque in Batumi. The Patriarch of Georgia said at the meeting that he would only bless the building of a mosque in Batumi if the Turkish side would allow the Patriarchate of Georgia to restore Orthodox services in Georgian churches situated on Turkish territory.

Metropolitan Gerasim (Sharashenidze) of Zugdidi and Tsaishi, Head of the Georgian Patriarchate’s Foreign Department, expressed an even clearer position in the pages of the Rezonans newspaper. According to him, although the Armenian, Greek and Catholic Churches and the Jewish community exist legally in Turkey, the Georgian national minority in Turkey is not registered and has no legal status, unlike the communities mentioned above.

In 2011, Rajab Erdogan, the Turkish Prime Minister decreed that all buildings confiscated from national minorities in 1936 should be returned to them. But that decree did not concern Georgian churches and monasteries.

The Turkish side explains this by the fact that in 1933, when the aforesaid registration was carried out, there was no Georgian association in Turkey, the Georgian community was not registered and therefore the churches mentioned were not recorded as belonging to the Georgian Orthodox Church.

However, as currently a large number of Georgians live and work in Turkey, the Georgian community has been re-established and there are all the preconditions for granting legal status to Georgian churches.

Metropolitan Gerasim stated that, according to the Turkish Minister, the desire to see legal status granted to Georgian churches and monasteries needs to be done in accordance with Turkish legislation, and this involves going through certain procedures.

“Arguments on the Turkish side are that there are many Turkish citizens in Georgia working in Adjharia; many of them have established families and they need a new mosque. But the number of Georgian people in Turkey has increased considerably, they too need churches where they can pray and attend services.

“At present Georgian Orthodox attend the Greek Church in Turkey. Georgian clergy come to them only on feast days, often experiencing inconvenience from Turkish customs officers and police. All these problems could be overcome if it were be possible to solve the issue of granting Georgian churches legal status and renewing services in the Georgian language,” said Metropolitan Gerasim.

Having noted as positive the very fact of holding active negotiations on saving and restoring Georgian churches in Tao-Klarjeti, the Metropolitan has called for the results achieved so far to be set down in writing.