Source: Christian Daily
Lorraine Caballero | 11 August 2016
Christians in Turkey have become the targets of Muslim persecution after the failed military coup that resulted in the imprisonment of more than 15,000 people. 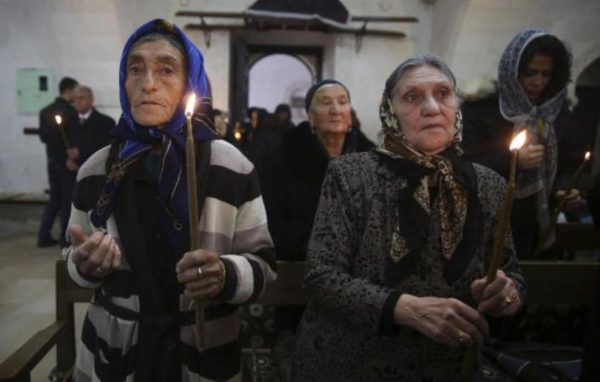 Photo: Reuters/Umit Bektas. Syriac Christians from Turkey and Syria attend a mass at the Mort Shmuni Syriac Orthodox Church in the town of Midyat, in Mardin province of southeast Turkey. February 2, 2014.

As scores are being settled in the wake of Turkey’s failed coup against President Recep Erdogan’s Islamist-learning regime, Christians have become easy targets of persecution by the local Muslims. The country is now crumbling into intolerant Islam, and the Christian minority has dropped from 22 percent of the population to a meager 0.2 percent in the last century, The Christian Post points out.

It is worth noting that Turkey has deep Christian roots since the earliest Christians were Jesus’ followers in Antioch, which is now Antakya. But now, 98 percent of the country’s population is made up of Muslims.

London’s Express newspaper reports that hardline Sunni imams have called on their members to target a small Protestant church in Malatya. A Muslim mob chanting “Allahu akbar” attacked the house of worship and broke its windows.

Fortunately, nobody was injured in the attack, but the pastor told the publication that the church was the only target during the time that the three-day coup raged on.

“The attack on the church was light. But it’s significant that it was the only shopfront attack in those three days,” Pastor Tim Stone said of the incident. “We were the only targets.”

In a separate incident in Black Sea city, another Muslim group smashed Santa Maria Church’s windows and hammered down its doors.

What happened that night is reminiscent of the attack on a Bible publishing house in Malatya in 2007. During that time, five Muslims tied up the hands and feet of three Christian employees before torturing them and slitting their throats.

Despite having a tolerant constitution, Turkey does not allow Protestants to build churches in the country. The label “church” is also required to be in tandem with the term “association.” To make matters worse, the Turkish government has seized churches in the city of Diyarbakir.