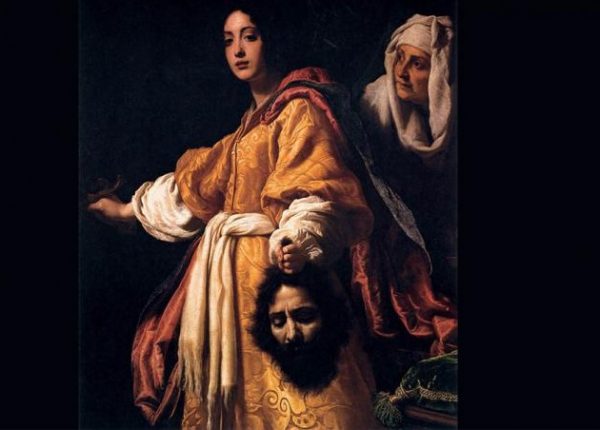 Anyone who has tried to incorporate both faith and reason in their practical life has run into this temptation. It usually goes something like: God is my plan A, but if at some point he doesn’t act I’ll be forced to go with plan B.

This is totally what Abraham did when raising the knife over Isaac. He thought to himself, “If God doesn’t stop me just before I stab Isaac to death, I’ll simply toss the knife overhead and say, ‘Just kidding, son. Ha, you should’ve seen your face. Come on, Let’s go find us a ram.’” Or as when Moses, pinned between the Egyptian army on one side and the Red Sea on the other, lifted his voice to a frantic Hebrew people, saying: “Everybody shush, settle down. Let’s give it 10 more minutes and if nothing happens, we’ll make a swim for it.”

But seriously, there are actual Biblical examples of this, one of the most striking of which is found in the book of Judith*. The scene was set in the Israelite town of Bethulia under siege by the Assyrian army. The Assyrian general, Holofernes, secured the town’s water supply and slowly, as they began to faint from thirst, forced the townspeople to rethink their trust in God. After a little more than a month of this the people rose up against the Hebrew leaders and demanded that they surrender the city. Their chief leader, Uzziah, spoke to them saying, “Brothers, take courage, and let us endure yet five more days, in which the Lord our God will return His mercy to us. He will not utterly forsake us. But if these days come and go, and no help reaches us, I will do as you say” (7:30).

The next scene has Judith (the heroine of the story) giving an amazing rebuke of the leaders. Her words are worth a full quotation:

“Listen to me now, rulers of the people of Bethulia! Your words spoken today to the people are not right, nor is the oath you have sworn and pronounced between God and yourselves, promising to surrender the city to our adversaries unless the Lord turns and helps you in so many days. Now who are you to have put God to the test this day, setting yourselves up as God’s equal among the sons of men? You are testing the Lord Almighty… Do not put a time bind on the purposes of the Lord our God, for He is not to be threatened as is a man, nor to be coaxed as a human being” (Judith 8:11-16).

Far from a display of faith, giving God a timetable amounts to testing God, and of making oneself equal to God. Setting a “time bind” is a way to threaten God.

To be sure, there is a clear difference between making contingency plans in everyday life and making contingency plans with God. Planning for various outcomes is the mark of prudence and wisdom—and yes, of responsibility—which God states again and again in Scripture that he honors. However, one’s innermost convictions and spiritual dignity should never become a pawn in one’s attempt to steer God. Uzziah’s crime was that he used the town of Bethulia as such a pawn, in fact, he used it more like a hostage situation: With a gun to its head, Uzziah cried out to God, “Make the Assyrians back off or Bethulia get’s it.”

It wasn’t his town; it was God’s town. If God wanted the town to perish so be it. We all die. But faith knew that the town was righteous and would not be “utterly forsaken.” Just as Abraham knew by faith that his only son would father many nations and not perish on the chopping block; just as Moses knew that God had saved the Hebrews and would not let them perish at the Red Sea. They had no contingency plan when it came to faith in God.

As a therapist I work with many Christians who are genuinely challenged in their faith when tragedy—or even threatened tragedy—strikes: The client whose child has cancer and none of the treatments are working, day after day she only gets worse; the client whose spouse left ages ago but he still can’t find a purpose in life or even a reason to go on living; the client whose childhood trauma will not let her loose, driving her deeper into depression no matter what therapy she tries; the client who survived a near death experience only to be saddled with endless debilitating panic attacks. These are just a sampling of scenarios that I encounter on a daily basis. The temptation in each of these situations is to hold out in faith for God to ‘show up,’ but if the situation persists, and God seems nowhere to be found, he is abandoned for the next most reasonable solution (often this means drugs or an alternative spiritual-religious outlook).

These are sufferings not remedied with positive thinking or slick arguments. Therapy is useful but, ultimately, they are situations that demand the sort of perseverance in faith which, strictly speaking, is not within the abilities of man. Faith is a gift from God. Our responsibility with the faith once received is to protect it from all attacks—foreign and domestic.

The situations mentioned above all have their answer in faith. And, not to turn this article into a theodicy, but the existence of evil and of suffering should not justify a contingency plan.

There was a time when people came to faith in Christ due to the existence of evil, and not in spite of it; they came to Christ in the face of insurmountable suffering with assurance that faith would almost certainly result in financial ruin, imprisonment, or death. Today much of this is reversed. Popular Christianity promises uninterrupted comfort and ease with assurance that faith conquers all—particularly in the temporal sense. But, of course, to live in a body is to suffer. It can be no other way. Bodily comfort and endless victories in the flesh was certainly not Jesus’ earthly experience. Isaiah assures us, “He was despised and abandoned by men, A man of great pain and familiar with sickness; And like one from whom people hide their faces, He was despised, and we had no regard for Him” (Isa 53:3). Yet, Jesus never gave the Father a timetable-ultimatum.

We are a society guided not by otherworldly ends but by default hedonism. Consequently, we have an unhealthy relationship to life and comfort. Stated more precisely, we have an unhealthy relationship to death and suffering. Hedonism never really was a devotion to pleasure but an avoidance of pain. Hannah Arendt said it best: “He who wants to make pleasure the ultimate end will have pain and fear as his true guides.” (None of this is to put one’s personal tragedy and the mere avoidance of pain on the same level–they are a universe removed–but rather to strike at the angle of our experience as a society.)

Rethinking contingency plans with God might amount to rethinking one’s faith in general.

But be assured of this: the historic Orthodox faith not only makes room for suffering, it practically turns on it; faith is unrecognizable without it. The suffering sort of faith is a refining fire capable of baptizing a believer into ever deeper realities of love and mercy in Christ.

*The book of Judith is considered a deuterocanonical book included in the Septuagint, used by both the Roman Catholic and Orthodox Church, but excluded from both Hebrew and Protestant canons of Scripture.

Critical Theory, Social Justice, and the Attempt to Disfigure the “Transfiguration”

A major problem between the social justice movement and Christianity can be found in early Critical Theory. Max…

Most viewed articles
Metropolitan Hilarion of Eastern America and New York to Be Buried in Jordanville on May 22295
What Do We Celebrate at Mid-Pentecost?132
Family Life and Spiritual Warfare102
Concelebration of Divine Liturgy by the Serbian Patriarch and Archbishop of Ohrid in Belgrade (VIDEO)73
Patriarch of Serbia to Concelebrate with Archbishop Stephen of Ohrid63
China’s Internet Clampdown Is Step Closer to ‘Cancelling Christianity’62
God Within the Chaos62
Registration Opens for June 17 Parish Development Forum Online23
Most popular authors
Pravmir.com team454
Ioannis Foundoulis132
Archpriest Michael Gillis102
Donna Birrell62
Priest Peter Kavanaugh62