Source: Greek Orthodox Youth Online
Gossip nowadays has taken on a life of its own. It’s spread on the internet, in newspapers and magazines, and even on television. Shows like Gossip Girl, aimed at today’s youth, show the malevolence of gossip while merely brushing it off as an “everybody does it” sort of thing.
Joanna Panagiotakakos | 03 February 2009

It’s defined as “idle talk or rumor, especially about the personal or private affairs of others.” We see it in politics, in social gatherings, amongst the young and old, in every language and regardless of cultural background. It’s whispered from one person’s mouth into another’s ear, behind closed doors, and under a cloud of secrecy. Rarely is it positive, and even more seldom is it true. What is this idle talk that every man, woman, and child seem to fall prey to?

The destructive, sometimes hurtful words that are contained in gossip.

While waiting for all my Sunday School kids to come into class and settle down, I asked a few of the girls how their week went. “Terrible,” one said clearly apologetic for her actions. “I sort of spread a rumor about a friend that I didn’t mean to.” This sent the rest of my class into a frenzy of life altering stories involving gossip: gossip they spread, gossip others spread about them, all the while spreading gossip amongst themselves. One girl giggled while she confided that her kindergarten sister had spread a rumor. Another miserably lamented months of torture at the hands of classmates in her middle school because of some gossip that was spread about her. Taking into account the engagement of the students in their conversation, I set aside my lesson for the day and we slowly began to talk about gossip from an Orthodox Christian perspective. 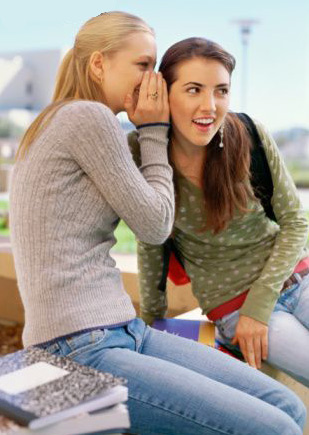 Gossip nowadays has taken on a life of its own. It’s spread on the internet, in newspapers and magazines, and even on television. Shows like Gossip Girl, aimed at today’s youth, show the malevolence of gossip while merely brushing it off as an “everybody does it” sort of thing. Many of my students believed the same. So how do we deal with rumors and gossip from an Orthodox perspective?

Firstly, I think it’s most important to be proactive and stop spreading gossip ourselves before we chide others for doing the same. Many would say this is a difficult task to accomplish, but think of it this way: would you want somebody saying the same thing about you? Did Christ not teach us to treat others the way we would want to be treated? Is this not the ‘Golden Rule’ of our religion? We also have to think of why we spread gossip when we do. Often it is because we are envious of a person, or we have a malicious intent. Other times we pass judgment on them – but isn’t God the judge of us all? And moreover, if he forgives a person that’s sinned, shouldn’t we as well. After all, when Peter asked Christ how many times we should forgive our neighbors, Christ responded with “I tell you, not seven times, but seventy-seven times (18: 21-23).” Many will say that we don’t realize we spread gossip when we do. However, if we really think before we speak, we have to ask ourselves if what we’re about to spread is wrong. Be mindful that if we have to ask ourselves if something is wrong – it usually is!

But what if we are the victims of gossip; what should we do then? God gave us all a voice to speak, but not to use it to bicker with those whose ears are closed to the truth. Luke 6: 27 – 31 says, “Love your enemies, do good to those who hate you, bless those who curse you, pray for those who mistreat you.” In the Bible we find the answers to all of life’s questions: love, bless, and pray. Though it may seem difficult at first, think of what we’re actually doing if we love those that try to spread gossip about us: we show them that our actions are stronger than their words. In the end, if we believe in Christ, and believe He is the light of the world, then we have to believe He will enlighten those that fall privy to the whisperings of others. Rumor has it He’ll even help us when we trip along our way to being gossip-free.

Joanna is the Publications and Youth Leaders Meeting Co-ordinator of the Metropolis Youth Board. She attends All Saints Greek Orthodox Church in Toronto, serving as a dedicated Sunday School teacher. She is studying to become a History/English teacher.

A few weeks ago one of my Sunday School students posed a very typical question. As she was…