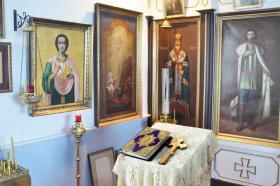 A 19th Century book of gospels is seen in the foreground as icons precious to the church and congregation hang on the wall and iconostasis, which separates the altar from the Holy of Hollies at Holy Assumption of the Virgin Mary Russian Orthodox Church in Kenai.

For as long as anyone can remember the fire defenses at Kenai’s historic Russian Orthodox church — filled with art and historical artifacts — have been three small fire extinguishers.

The next phase of a restoration and protection project set to begin next month will eventually reduce the threat of fire to the wooden church, which has for 118 years been the center of Kenai’s Russian Orthodox community, by installing a special fire suppression system, among other improvements.

The work at Holy Assumption of the Virgin Mary Russian Orthodox Church is largely funded by National Park Service (NPS) grants, state funding, the city of Kenai and money from the Rasmuson Foundation. More than $400,000 has been raised for the construction and restoration in the next phase.

Holy Assumption is one of 49 Alaska locations on the National Register of Historic Places, of which 35 are Russian Orthodox Churches.

“It’s the highest honor,” said Grant Crosby Sr., Historical Architect for the National Park Service in Anchorage, of the historic listing and restoration benefits that come with it.

As a whole, the church is considered among the top and most lasting icons of Russian Alaska in Alaska today; cultural assimilation, Native Alaskan education, socialization, village arbitration and creative expression all centered on Holy Assumption and associated buildings and its grounds.

Among the usual risks that accompany time’s effect on living historical artifact are problems with walls and foundations, which have been addressed in phase one, but the threat of fire has always been there and remains.

Crosby said that there is no other way to describe the church and its contents than beyond dollar value — “irreplaceable.” There is an insured value out there somewhere on insurance papers but you cannot replace an original with a replica, he said.

A treasure-trove of primary source historical documents about life in Kenai fills the attic of the church.

People in Kenai and across the state as a whole acknowledge that these preservation projects are not necessarily a religious project, said Sheri Buretta, chair of the board at the Russian Orthodox Sacred Sites in Alaska (ROSSIA), a non-profit renovation and restoration organization and the chief fundraiser behind the work at Holy Assumption.

The Kenai church is the first of many churches on ROSSIA’s list. All the money is not yet in, but the projects will move forward, she said.

In order to not destroy what they seek to protect, ROSSIA and the church will install a high-pressure mist fire suppression system rather than the standard system, which would also save the building but would likely result in a total loss of the art inside if deployed. With it, the church is headed in the right direction, Crosby said.

The goal of historical preservation is to return to or keep the original appearance of the church. It requires complex coordination between the diocese as owner, the parish as steward, ROSSIA as the funding organization and NPS as technical advisory, he said.

In terms of national historical artifacts, the buildings of Holy Assumption represent “fine” examples of a Russian village church and the type of home provincial Russian gentry would inhabit.

Those contents also include the oldest piece of non-Native art in Alaska, a 17th century copy of the 400-year-old Our Lady of Kazan, which disappeared from its home monastery in Russia in 1904.

“These are priceless,” said Holy Assumption’s Resident Priest Rev. Thomas Andrew of the icons and gospels dating back centuries in some cases and to the beginning of orthodox life in Kenai.

Before the fire protection can be inbuilt into the church, work this summer will concentrate on an outbuilding to house the mechanical equipment that will power and run the combined suppression and alarm system. Along with the mechanical room, will also be the church’s first bathroom.

“They’re excited about that,” Crosby said.

Andrew, the third-longest serving priest to lead the parish, compares the icons on the walls and iconostas at Holy Assumption to irreplaceable treasures found in any modern home — family photographs.

“How important are the pictures on your walls?” Andrew asked.

Pointing to the saints of the Eastern Church depicted in icons in the church Andrew said, “Mother, father, grandparents, great-grandparents, these people you see are just like that. They remind you of the way to live, how to be and to follow in their footsteps.”

As an art collection, one of the unique aspects of Holy Assumption’s icons is the mix of traditional Byzantine style icons and their lack of dimensional perspective with others in the European Renaissance style that developed under Peter the Great and represents the rift that led to the Old Believers splitting off from the main church.

“Peter the Great loved Europe and the Renaissance,” Andrew said of the Russian Tsar who ordered the Alaska expeditions that led to Kenai’s eventual founding.

Among the variety of theological depictions on the walls are icons explaining the assumption of the Blessed Virgin Mary, Christ in the Garden of Gethsemane and the resurrection. Two 19th century gospels are still in use weekly; one dates back to Kenai’s first permanent priest, Father Nikola Militov.

Beyond artistic, the icons are also church texts, a tradition that predates the ninth century mission of St. Cyril and St. Methodius who are credited with creating Old Church Slavonic.

Icons can still be used today to teach children who do not yet read and those adults that have not learned to read, said Andrew.