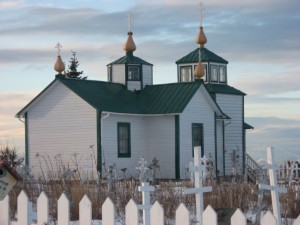 Like many things human, how it came to be is complicated. Now, as it dies out, Ninilchik Russian continues to be complicated.

The number of fluent speakers of Ninilchik Russian continues to shrink. To combat the loss, a couple of cousins from the Russian village teamed with academics from Fairbanks to Moscow during the last 15 years to catalog and record the language that settled in the isolation of the Kenai Peninsula during the time of Tsar Alexander I during the waning years of the Russian American Company.

What has only recently been termed as Ninilchik Russian has been spoken continuously for 166 years in the village at the mouth of the Ninilchik River, said Wayne Leman, linguist, author, translator and Ninilchik native.

Leman is credited, along with his cousin, Bobbie Oskolkoff, for their extensive work collecting vocabulary and stories from their families that provide the base for a dictionary and preservation project with linguist Mira Bergelson from Moscow State University and Andrej A. Kibrik, of the Institute of Linguistics, Russian Academy of Sciences.

Tangled among the roots of the original four families and 16 decades of Ninilchik Russian culture is the pain of assimilation that came near the end – in the 1930s and 1940s – as the culture was forced to become American overnight. It’s a fact that makes recent international media attention on the village bittersweet for some of the remaining speakers.

Bobbie Oskolkoff’s mother and grandmother spoke Ninilchik Russian. Though she could understand them, she never reached fluency.

“At the time I didn’t think much of it or (my) ability to understand,” Oskolkoff said.

Her direct interest in the language came later in life as she started to collect the stories about her people and the village. Now living in Kenai, she said that most of her generation did not learn the language either. Some decedents feel bad about not learning the language, but there was sadness attached to Russian language by the time Oskolkoff’s generation came along. Her mother and grandmother were punished for speaking in their native language, she said.

“She didn’t’ want us to suffer like they did,” Oskolkoff said of her mother.

Today, it’s hard for an outsider to get Joe Leman to talk about his Russian culture and language. The 93-year-old Patriarch of the remaining Russian speakers recently spent a morning with his wife working in the graveyard at the Holy Transfiguration of Our Lord Chapel Russian Orthodox Church in Ninilchik. Leman and his wife still live on the bluff above the village.

As the couple cared for the graves of family and friends, Leman warmly greeted tourists who approached. He talked openly about fishing; snowmachining, fox farming – when it was profitable in the 1920s – and hunting ptarmigan in the hills to the east.

When asked about his first language, Leman said he still speaks Russian with his wife and “yes” he has indeed seen the dictionary that he helped create. It didn’t take long for a story to turn down-tempo as he told of a time when the village transitioned from the Russian education of the Orthodox Church to the English school. Leman had some phonetic trouble pronouncing the “th” sounds in his new language, English.

With reverence for the pains and embarrassments the last generation of speakers suffered, the cousins still desire to hear Russian spoken by the voices that raised them. Words that make their mouths water.

“We crave being able to speak the language or our parents’ hearts,” Leman said.

The elders don’t speak Russian as a main language anymore, but when they get together they speak their mother tounge. And once the conversations get rolling with stories and jokes it takes them back to their roots.

“It’s very special when the elders hear the old jokes,” Leman said. “Their eyes light up.”

For Leman, one of the greatest outcomes from the attention their language has brought to the community is that there is again pride in knowing how to speak Ninilchik Russian. The project has helped the elders, he said.

“Instead of shame about speaking Russian, the people were excited,” Leman said. “The elders felt honor and respect.”

“You can’t have the language without the culture, the food,” Oskolkoff said. She considers herself to be Russian, then Alaska Native.

“The history of the Ninilchik dialect embraces four centuries,” Bergelson wrote in her conclusion for a paper presented in Moscow last May. “Their descendants managed to maintain their Russian language under the pressure of strong assimilation processes throughout the 20th century, which saw many languages perish.”

In 2009 the project returned to earnest work, which expanded the vocabulary collected to include verbs, adverbs and particles. Plans for the dictionary include sound files.

As the end nears for the language, Bergelson considers the work done to this point so thorough that it’s unlikely that many more words would be found with further work.

After the language disappears with the last speaker, it will live on in the memories of Wayne Leman’s generation and in the dictionary they created. Some words will survive in common family usage.

It is the collected vocabulary of Ninilchik that breaks down the stereotypes of a pidgin language that was, for years, hoisted on Russian speakers along with the cultural insults that went with it.

Academically speaking, Ninilchik Russian is 78 percent standard Russian with an additional 15 percent comprised of other Russian dialects, including a little 19th Century Russian, some Russified English words and half of one percent each of Athabaskan Dena’ina (the Alaska Native language of the Kenai Peninsula) or Alutiiq (The Alaska Native language of the Ninilchik matriarchs). According to the study, three percent of the words in Ninilchik Russian originated in the village itself, words such as Beybchka and gazn’ ik, which mean “child” and “gas can” respectively.

“Ninilchik Russian is indeed the Alaskan version of Russian, and nothing like a pidgin or a mixed language,” Bergelson reported during her presentation.

Those words became the focus of linguists starting back in the 1980s, then were revisited in the 1990s and again in 2009. Oskolkoff sees the entire vocabulary collection and recordings as a gift to the future generations of Ninilchik descendents so that they never forget who they are.

Leman said Ninilchik Russian is not “exotic,” there is just nothing else alive in language to compare it with. There was very little influence in the village from outside well into the 1930s, after the last native speakers were born. With the language goes church, food and housing. Leman said that for many years, well into the 20th Century, people from Ninilchik would say “We are Russians.”

As a linguist, it’s wonderful to have speakers still around to interview and record for research, Leman said.

“We can preserve the language,” he said.

Greg Skinner can be reached at greg.skinner@peninsulaclarion.com

July 23, 2013 For as long as anyone can remember the fire defenses at Kenai’s historic Russian Orthodox…