Great and Holy Friday: The Icon of the Crucifixion 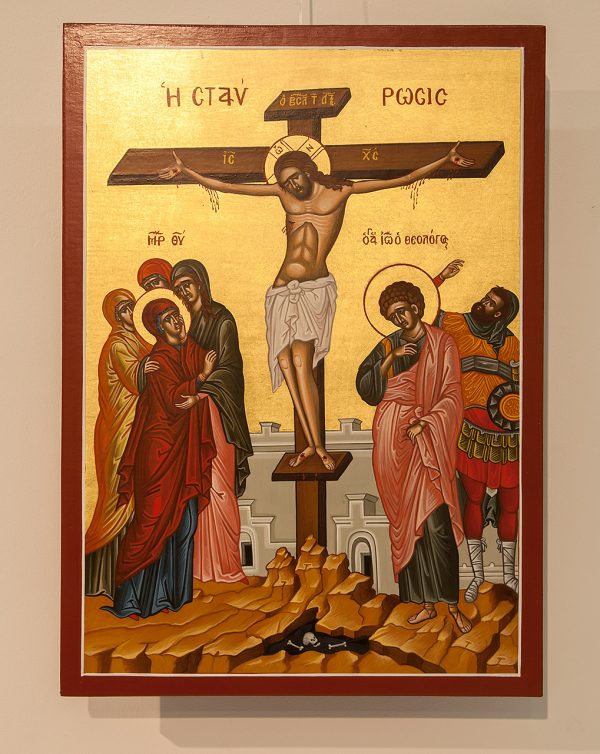 Depictions of Christ’s crucifixion are not ancient, by Orthodox standards. So far as I can find (correct me if I’m wrong), Crosses with the figure of Jesus on them were not sanctioned till the end of the seventh century at the Trullan Council in A.D. 692. After that, East and West gradually took different directions.

Orthodox have never focused on the sufferings of Christ. Of course he suffered. Crucifixion, the ordinary Roman method of capital punishment, was horrible. The bodily mechanics, so to speak, were that in order to breathe you had to pull yourself up. That was why crosses had foot pedestals on them – so those being crucified would hang there gasping in agony as long as possible. Lord, have mercy.

But compare the Orthodox icon of Christ’s

crucifixion left to a similar traditional Roman Catholic crucifix right. The differences seem subtle at first, but the more you look the more obvious they are. Observe the posture, the head, the face.

The western crucifix shows Jesus with his body drooping, hanging exhausted from his suffering, apparently dead. When he cries “It is finished”, it seems to mean “It is over. My suffering is ended at last. I have paid the price.”

The Orthodox icon of the crucifixion is less realistic, more symbolic. Here Christ appears almost to be standing of his own volition, in control of the situation. There are a few drops of blood on his hands and feet and side, along with some water from his side as John described. His eyes are closed, but his face is at peace, and in some Orthodox crucifixes I swear he almost has a self satisfied look on his face. He cries “It is finished” with a different meaning: “It is completed. I have done what I came to do. I have been faithful to the end. I have brought mankind to perfection: for the first time a human life lived without sin. I die now leading all mankind into death and out the other side into the Resurrection. Now I open the gates of eternity to every man and woman. It is finished. It is completed. I have done it!” It is a declaration of victory from the Cross.

That is why our typical Holy Cross hymn, sung at various feasts of the Cross throughout the year, is not about the sufferings of Jesus. It is about the victory of our Lord and God and Savior Jesus Christ and his power. Did you know it was one of the marching songs of the Byzantine army? Listen to the words (this is the Antiochian translation): “O Lord save thy people and bless thine inheritance, granting to thy people victory over all their enemies, and by the power of thy Cross, preserve thy Kingdom”.

Make this your marching song, too. “Take up your cross and follow me” is a call to the victory of life. “Just keep following me. I will take you where you need to go. Don’t give up through good times and bad, through thick and thin, in easy times and hard, happy times and sad, through joy and suffering, life and death, faithful to the end. I have done it. By my grace, you can do it. Take up your cross, whatever it may be. Don’t just endure it, take upyour cross, as I have taken up mine willingly, voluntarily, and follow me into the Resurrection.”