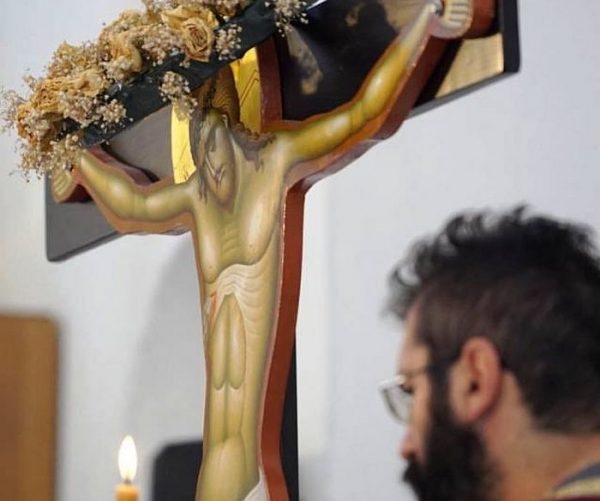 “Go and make disciples of all nations, baptizing them in the name of the Father and of the Son and of the Holy Spirit, and teaching them to obey everything I have commanded you.” Matthew 28:19 That seems clear enough.

So how are we doing lately? Not well. Examples:

Yes, Christianity is growing fast in Africa, but for the most part it’s a sort we Orthodox can scarcely recognize. And Mormonism, despite (or maybe because of?) its peculiar teachings, is everywhere doing very well, thank you.

Russia (which according to statistics is the majority of our 250 million Orthodox in the world) is openly Orthodox again – but our people there seldom go to church or pray.

Western Europe has now been lost to secularism.

America? In the last twelve years the number of Christians here has declined from 76% to 65%, while those religiously non-affiliated has risen from 18% to 25%. * (And little wonder, say I.) Project that out three or four more decades and…

Liberal Protestantism, in particular, is collapsing. Despite their reported stats, it’s no secret that the American Roman Catholic Church is in major decline: few priests, attendance is way down. American Evangelicals are barely holding their own now.

Here’s an interesting article, written by an Evangelical a few years ago, who says the Evangelical churches are about to collapse, and he thinks the great beneficiaries will be us Orthodox, if we’re ready. If.

So what about us Orthodox? Some claim there are six million Orthodox in the U.S. That must include anybody who ever sniffed incense while walking by an Orthodox church. But back in the real world, apparently we’re growing! According to the latest stats I can find, between 2000 and 2010, the number of Orthodox parishes in the United States increased by 17%.

The conclusion: The fields are ripe for harvest. We Orthodox, as the authentic Apostolic and Catholic Church founded by Jesus Christ, need to get off our comfortable tails and get busy with our mission. Christ for the world!

Follow Christ’s example: Jesus, like a good Jew, went to synagogue. Luke 4:31 for example. Even He sought that foundation. But His ministry was chiefly out in the world. He was baptized not in a beautiful font but in a River. His greatest

sermon was proclaimed not in synagogue but “on the Mount” Matthew 5:1-7:27 and then again “on the Plain”. Luke 6:17-49 He was crucified not on a lovely altar in a church but “out there” on the lonely hill of Golgotha. He arose not inside the Church of the Anastasis but in a cave.  He gave His Great Commission atop at mountain. You get the point.

So what is the purpose of our church buildings, our budgets, our social gatherings? Of course we love being in church on Sunday mornings: absorbing the beauty of our temples, gathering to worship our great God and receive the Holy Eucharist and enjoy fellowship with our brothers and sisters. But that is not an end in itself. The purpose of all this is to shape us and train us for our mission: so that like the Apostles we, each in our own way, can “go out to all the world” and share what we have, draw others to Christ and his Holy Church. So that then they also can do the same.

1 The Personal Touch. This is the most important one. Christianity is above all “relational”. “God so loved the world”; He didn’t just tell us what to do. So love your neighbor. Go out of your way to get to know people. Don’t lay Orthodoxy on them. Just be good to them. Be kind. If they have troubles, sympathize – like Jesus who knows our weaknesses and sympathizes with us Hebrews 4:15 and offer to pray for them. Just “be there” for people. A ministry of presence, some call it.

And then if you find people who are seeking, don’t be shy. For heaven sake, literally, tell them you’re Orthodox. Invite them to Liturgy. Or better, offer to bring them to Liturgy. As Father Peter Gillquist used to say, about 10% of the people you invite to church will come, but 100% of the people you bring to church come! But be sure to tell them that if they don’t like it, you’ll still be friends. Leave it in God’s hands. This is a cheap analogy, but the first time I tasted pizza I disliked it, but suddenly two weeks later…! and I’ve loved pizza ever since.

2 Quiet witness. When I was in college and ignoring religion, I was invited to visit my roommate’s family for a weekend. In their dining room a crucifix hung

on the wall. Before meals they always prayed and made the sign of the cross. At school, every morning during Lent my roommate got up early and walked a mile to Mass. He never said a word about it nor did I, but I was impressed. These people believed something; it was important to them. That was part of my spiritual awakening which got moving later elsewhere. We lost touch, and he and his family never knew the effect they had on me. But thank you and God bless you, David Weisgerber, wherever you are.

and invite them to join you. Wear your Orthodox cross visibly. Orthodox men, get a short chain for your cross left and wear an open collar if you can. In today’s culture we need to witness visibly to who we are. At work, if it’s permitted, have an icon on your desk or wherever. You needn’t say a word about all this. In fact it’s better if you don’t. Be mysterious. That is, be Orthodox. Actions speak louder than words. Probably you’ll never know the result. As Jesus said, someone plants the seeds and someone else gathers the harvest

3  Raise your children right. This is our chief mission to the world. They are the next generation of Orthodox Christians whom we will send out into the world. Bring your kids to church regularly. Have an Orthodox home. Make it “a little church”. This is why during Epiphany the priest comes out to bless homes.

Have an icon corner. Say prayers at home especially at meals. Set a moral example for your children. Most important, fill your home with love. Teach your children, show your children how to love God, how to love people. Love your family as Christ loves, unconditionally. When you fail, show your children how to say “I’m sorry”. When somebody hurts you, show them how to forgive. And everybody at church, give our young people some attention. Last Sunday at coffee hour I watched a five year old girl bring a picture she had made and give it, all smiling, to Father David. She is starting out loving the Church, and then she will carry that out into the world.

4 Reach out to the needy. This is so obvious. Reach out with Christ’s love to those who need it most. This was Saint Basil’s great mission to the world: his city for the poor, sick and hungry which he built outside his see city of Caesarea. It endured long after him, and the example of his mercy even longer. Give to Orthodox (and other) charitable organizations. If you can, get personally involved, working at a food pantry or meal program or whatever. Christ’s love for the world!

5 Have a solid parish. So that when visitors come to your church they will find something the world is not giving them: people united in the Faith, people who know and love Jesus Christ and his Church and who love each other, people who are growing in

the Spirit, becoming like Christ, focused on something deeper than “me”, who are being set free and are on their way into the Kingdom of God. When people come out of this confusing world seeking something better and find these things in a church, usually they stay. This they understand even if they don’t yet understand the Liturgy. Or to put it negatively, when people come to a church and find people fighting like cats and dogs, they flee.

So go out of your way to welcome visitors. Don’t leave them standing or sitting alone. You needn’t say any more than “We’re glad to have you here.” And if you’re afraid they’re parish members you don’t know (!) just introduce yourself.

6 Christ for the natural world! which He created, in conjunction with His Father and the Holy Spirit – and for which He made us His stewards. This is the clear and obvious meaning of our annual Orthodox Epiphany Blessing of the Waters, when we process out the doors of the church and bless the nearest lake or river. Water, the most abundant element (by the ancient definition) of the world, water which gives life. We Orthodox bless not only people but also the material world, beginning with the waters of Baptism, and Holy Bread and Wine and Oil, and our churches and our homes and animals and almost anything else which will hold still for it – because we believe that all good things will finally be lifted up into the Kingdom of Heaven. So on Epiphany the Bishop or Priest throws a Cross into the waters three times to bless them. Then in warmer climes men (and now sometimes women!) often dive for it.