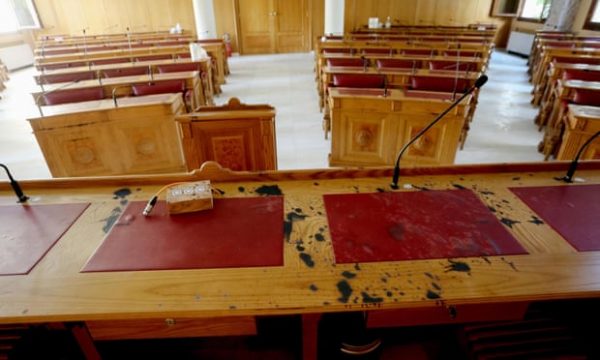 Acid marks on the benches inside the synod chamber in Athens. Photograph: Christos Bonis/Handout/EPA

The Holy Synod of the Orthodox Church of Greece condemned the unprecedented attack against several bishops that took place in Athens on Wednesday and expressed their sympathy for all the wounded, reports OrthoChristian.

A defrocked Greek Orthodox priest was charged Thursday with multiple counts of causing grievous bodily harm over an acid attack that injured seven senior bishops and three other people.

Three bishops remained in hospital on Thursday, with one reportedly undergoing plastic surgery, while the suspect was due to appear before a public prosecutor. Two lawyers and a police officer were also injured in Wednesday’s attack. Most had burns on their face and hands.

The suspect, identified as a 37-year-old hieromonk, Theophylactos Kombos, had been attending a disciplinary hearing called to formalise his removal from the church in connection with drug charges from 2018.

The Synodal statement noted that Metrpolitans Nikodemos of Kassandreia, Kallinikos of Arta, Andreas of Driinoupolis, Dionysios of Zakynthos, Kyrillos of Kifissia, Demetrios of Goumenissa and Antonios of Glyfada and Archimandrite Sebastianos Somarakis, Secretary of the Synodal Court, were all injured in the attack.

“The Holy Synod expresses its disgust for this unprecedented attack, especially because a former clergyman is involved, and expresses its sympathy for the wounded, and is committed to the speedy restoration of their health,” the statement reads.

The Synod also expressed its gratitude to the guard who was injured while arresting the attacker, the medical personnel who have attended to the wounded, and the Greek police for their speedy work.

The hierarchs especially thank Patriarchs Bartholomew of Constantinople and Theodoros of Alexandria and other bishops, as well as Greek state officials who have reached out to Archbishop Ieronymos of Athens to show their support for the victims of the attack.