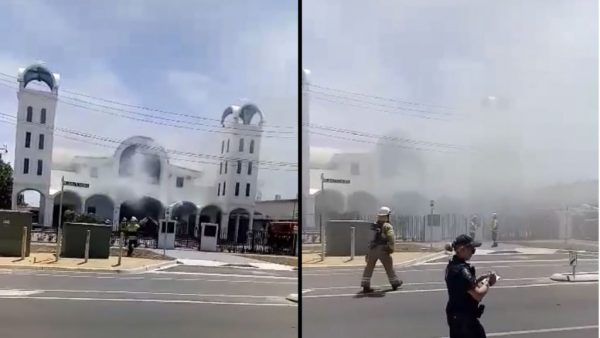 Greek Orthodox church of The Nativity of Christ during the fire. Photo: Supplied/Sofronios Semetzidis

The Greek Orthodox church of The Nativity of Christ, one of the most loved and popular Greek churches in SA has gone up in flames leaving a whole Greek community in SA devastated. Port Adelaide residents were warned to seek shelter indoors after the fire ignited just after 2pm on December 6. Firefighters were forced to break down the front door of the church to fight the blaze engulfing the building, which has reportedly caused up between $500,000 and $1 million.

“We are devastated. This church was 60 years of hard work. We celebrated the milestone just a few weeks ago,” said to Neos Kosmos, one of the longest standing members of the Community of Port Adelaide Ms Alexandra Vakitsidou.

Parishioners rushed to the scene as firefighters battled with the flames for over an hour.

“The support from everyone has been really touching and we hope that with the help and support of everyone we will get back on our feet,” added Ms Vakitsidou whilst the President of the Greek Community of Port Adelaide, Mr John Douvartzidis confirmed to Neos Kosmos that nobody was hurt and the investigations regarding the cause of the fire are continuing.

“This is our history, part of our migration story, and we owed it to our children and grandchildren…

Watching Australia and its people experiencing one of the most devastating tragedies in the nation’s history, Greek Australian…