Source: Daily Mail
Natalya Mihailova | 03 May 2017
A Coptic Christian church in Sydney's inner-west has gone up in flames, with extra fire crews needed to control the inferno. 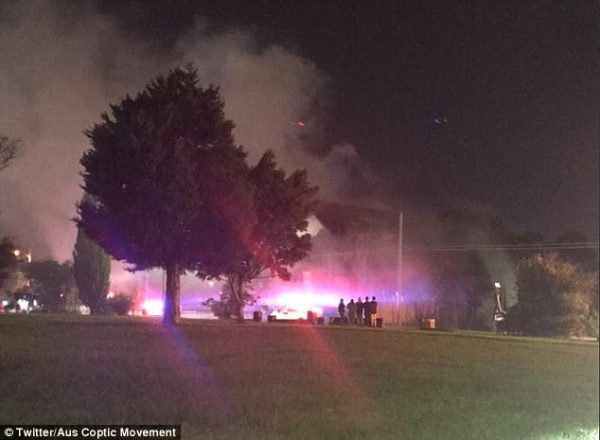 The Egyptian community has posted heartbreaking images of fire engulfing the church on Railway Road in Sydenham.

‘This is devastating,’ the Australian Coptic Movement tweeted.

Fire crews were called about 8.30pm, with 10 firetrucks sent to the scene.

A spokesman for Fire and Rescue New South Wales said it was still too early to determine the cause of the fire.

‘It was quite a severe fire,’ he told Daily Mail Australia on Tuesday night.

‘It will take quite a while to say what caused the fire.’

The fire caused major damage to the back of the building.

No one was injured and there were no evacuations as firefighters from Marrickville spent two hours bringing the blaze under control.

Police from the Newtown Local Area Command established a crime scene, which will be forensically examined.

Witnesses are urged to contact police via Crime Stoppers.

The building started life as a Methodist church in 1902.

It was reconsecrated as a Coptic Orthodox in 1968 but the parishioners moved to Bexley during the mid-1990s to escape noise from a new airport runway.

Father Mikhail said couples who exchanged wedding vows in the former church came to the scene to pay their respects.

‘All the members, we have good memories in the church,’ he said.

‘People who get married, they are here. This is an indication of the value of the church on the hearts of the Cops.’