Source: Greek Reporter
Ioanna Zikakou | 22 January 2015
The Greek Orthodox Patriarchate of Alexandria and All Africa intends to implement a program to help the fight against AIDS in South Africa, according to Patriarch Theodoros’ statement during his meeting with the country’s president, Jacob Zuma. 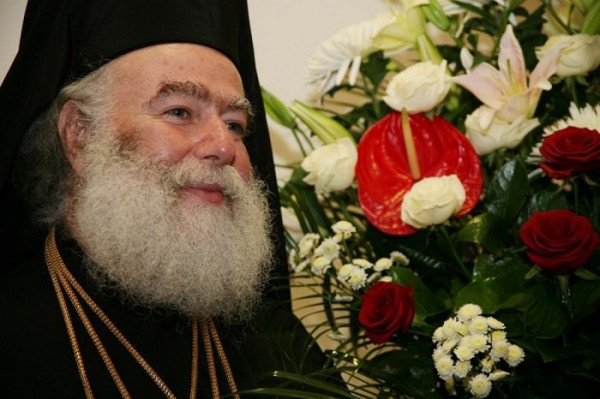 The two men met at the presidential residence in Pretoria and Patriarch Theodoros promised that the patriarchate would contribute significantly in providing vulnerable groups of people with clean drinking water.

President Zuma welcomed the patriarch of Alexandria and his entourage and praised the role and presence of Hellenism in South African society over the years, referring to the well-known human rights lawyer who campaigned against apartheid in South Africa, George Bizos.

Meanwhile, the Patriarch of Alexandria and all Africa stressed that Greeks and Cypriots in South Africa are actively contributing to the country’s progress and prosperity.

Furthermore, the South African Minister in the Presidency, Jeff Radebe, and other members of the country’s government, as well as the Metropolitan of Johannesburg and Pretoria, Damaskinos, and the ambassadors of Greece and Egypt to South Africa were also present during the important meeting.

Patriarch Theodoros awarded President Zuma with the Grand Cross of the St. Mark Order of the Lion and offered him a cross wishing that the president would always carry it with him. He then invited him to visit the patriarchate headquarters in Alexandria, Egypt, an invitation that President Zuma gladly accepted.

Most viewed articles
How to Read the Bible172
Patriarch Kirill Encourages the Media to Report Proper and Adequate Information about the Church126
Words from St. Isaac of Syria125
Since the Start of the Pandemic Moscow Priests Have Made Over 4,000 Visits to Patients with COVID-1990
Archbishop Peter of Chicago and Mid-America in an interview to Poltava Diocese’s press service reveals interesting moments in the life of St John (Maximovich)87
“Do Not Weep”77
Best Films of the Pokrov Film Festival Have Been Determined52
Using Our Time Wisely to Cultivate the Seeds of Faith2
Christ the Life Giver1
Most popular authors
Pravmir.com team355
Archpriest Lawrence Farley172
Archpriest Stephen Freeman125
Archpriest Peter Olsen77
Priest Luke A. Veronis2
Fr. Theodore Stylianopoulos1