“He preached the message of the Resurrection for 12 years”: First Bishop of Deva Gurie Georgiu laid to rest at Cathedral of St Nicholas 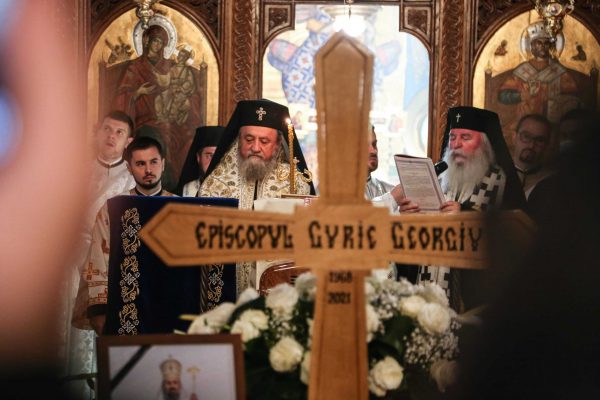 Photography courtesy of the Metropolis of Transylvania

“This is the message of His Grace Bishop Gurie: believe in the Resurrection of the Saviour Jesus Christ! (…) It is the message he has sent you over the last 12 years. The Saviour rose after suffering for us and rose for our salvation, and we will all rise beyond in the Kingdom of Heaven,” Metropolitan Laurentiu of Transylvania said on Saturday at Bishop Gurie’s funeral. The first Bishop of Deva and Hunedoara Gurie Georgiu was laid to rest at St. Nicholas Cathedral in Deva.

The Metropolitan of Transylvania urged everyone to remember the one who pastored the Diocese of Deva for 12 years in their prayers.

“Let us honour him, following the example of his life, the perseverance of his life and especially his sincere and pure smile,” the metropolitan said.

“He did not have time to rest, nor did he stop this mission. And I remember one thing we heard at the Holy Synod, of the 70,000 catechism books, the teaching of faith for the faithful, which were handed out to families. He was both humble and dignified, a worthy servant of the altar.”

At the end of the funeral service, His Eminence Metropolitan Teofan of Moldavia and Bukovina read out the message of condolences of His Beatitude Patriarch Daniel.

In his speech, Metropolitan Ioan of Banat noted that Bishop Gurie passed into eternity “because he did his duty, he fulfilled all that God gave him to do (…) and called him to Him.”

State Secretary for Religious Affairs Victor Opaschi lamented the untimely departure of the first bishop of the Diocese of Deva and Hunedoara.

“He was a kind man towards his clergy and faithful, and as far as I know, he did not wrong anyone, at least consciously, by entrusting his generous heart to all. His Grace Bishop Gurie remains in my memory as a worthy, gentle, modest and discreet hierarch, embodying the image of the bishop devoted to the service of his neighbour and his community. I bow before his coffin, confident that the gentleness and kindness of His Grace will always remain in our memory,” Victor Opaschi said.

Before the burial ceremony, the coffin was carried by priests in a procession around the Diocesan Cathedral of Saint Nicholas in Deva.

He was buried in the cathedral’s narthex, “so that all who will enter this cathedral will remember and pray for the rest of the one who was the first Bishop of Deva and Hunedoara, enthroned almost 12 years ago in this great church.”

The earth used to cover the tomb was brought from the monasteries of Lainici and Prislop as a sign of the eternal spiritual connection of the late hierarch with the two significant monastic settlements.