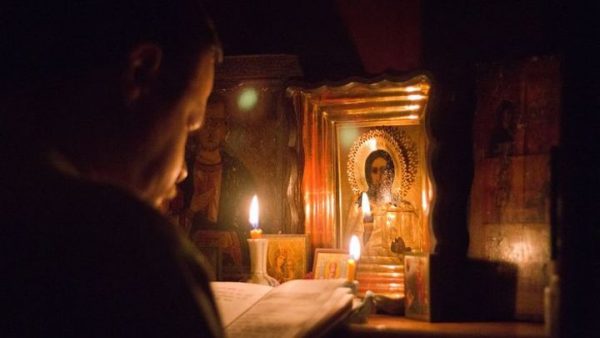 With the Resurrection of Jesus Christ, a new and glorious reality dawned upon the whole creation, especially for those united to the Resurrected Christ by faith in baptism. For the Good News of the Gospel, as summed up in the Orthodox Christian paschal hymn, is that “Christ is risen from the dead, trampling down death by [His own] death, and upon those in the tombs bestowing life!” As the first Adam sowed corruption and death into the fabric of the human race, the Resurrection of Jesus, the “New Adam,” initiates a renewed grace-filled humanity that is impervious to the tyranny and power of death.

This new “race” of man, of which Christ is the “father” (Isaiah 9:6) and the “firstborn” (Revelation 1:5), is birthed in the baptismal font and nourished by the incorruptible food and drink of Christ’s own deathless Flesh and Blood received in the Divine Eucharist. Baptism is described by the holy Apostle Paul as our participation in Christ’s death, that “we also should walk in the newness of life” (Romans 6:4), that is, the resurrected life. And the Lord Himself identifies the participation in His Body and Blood as the means by which we are raised unto “eternal life” (John 6:54). So central to the Gospel is the preaching of Jesus’ Resurrection and its implications for mankind that the Athenians imagined Saint Paul preached two deities, Jesus and the Resurrection (Greek: Anastasios; Acts 17:18).

The Christian faith is not primarily a set of doctrines or moral teachings, but a new way of life inspired and made possible by the reality of the Resurrection. In the Person of the Resurrected Christ, humanity has been given the potential to participate in the divine life, to be shot through with the uncreated grace and energies of God Himself. This potential begins to be realized in each human person when he or she is joined by “water and the Spirit” (John 3:5) to the Church, which is itself the resurrected “body of Christ” (1 Corinthians 12:27).

The Body of Christ, those who are united to Him, are no longer futilely bound by the limitations of corrupt nature, nor by the spiritual separation that has its source in sin and death. For Christ overcomes the division between heaven and earth, uncreated and created, invisible and visible, male and female, and finally, life and death.

All of this is to emphasize that the Resurrection of Jesus Christ is not merely an abstract doctrine to believe in, not merely an isolated past event to assent to intellectually, but an organic reality to enter into and assimilate into one’s being in Christ’s body, the Church. The Resurrection is the very life and atmosphere of God’s Church, made present of the divine worship of the Church through the union of heaven and earth in Christ.

The natural implication of this unity of heaven and earth in the Church, as attested to by the Holy Scripture and the saints, is the union and communion shared by those who are “in Christ.” This union transcends death. Death has no more power for those joined to Christ. Because of the Resurrection of Christ, death can no longer separate man from God nor man from his brother in Christ, whether from the living or among the departed.

Therefore, the ancient (early) Christian practice of calling upon the intercessions of the departed Saints was and is born from a living faith in the radical consequences of the Resurrection of Jesus. For “God is not the God of the dead, but of the living” (Matthew 22:32). If indeed the departed in Christ are alive in Him, then the earthly Church will naturally keep the memory of, relate to, and call upon as intercessors with Him those members of the Heavenly Church who are sharers in the eternal fruits of His Resurrection.

As the first generation of Christians, and most especially the holy Apostles, began to depart to Eternal Life, the Church naturally remembered them and sought their prayers before the Throne of God, especially when they gathered together for the Divine Eucharist. Inasmuch as the divine Eucharist is the “remembrance” (Luke 22:19; 1 Corinthians 11:24) in Greek anamnesis, re-calling, re-presenting) of the Lord’s Death and Resurrection and a participation in the Eternal Heavenly Liturgy, it supplies the most fitting experience of the communion between the living and departed. In the Epistle to the Hebrews, the holy Apostle Paul clearly acknowledges the presence of “the spirits of just men made perfect” (i.e. departed saints) along with “an innumerable company of Angels” in the midst of the Eucharistic assembly (Hebrews 12:23). (Source: Know the Faith by Rev. Michael Shanbour)