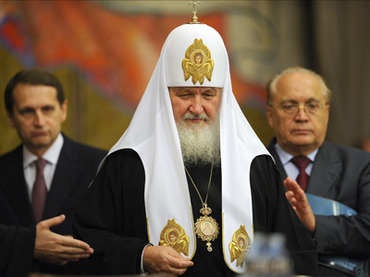 Patriarch Kirill said the Orthodox Church did not intend to merge with the state but advised to stop copying western ways and values as this would mean ‘an eternal lagging behind’.

Speaking to Moscow State University students, the head of the Russian Orthodox Church blasted those who advocated the European way of development as, in his view “imitating and copying is always inferior to the original as it lacks the original beginning, the true authorship”.

The cleric went on to suggest that such an approach was dangerous. “When you build a civilization on the foundation of imitation this means that you determine the development in such a way that it will always be dependent upon those who have given birth to the original and continues to do so” the Patriarch said. “It is dangerous to stay in the lead, at least for adults,” he concluded.

Kirill added that Russia had already known examples of “senseless and often aggressive westernization”, but the true European way was not in copying, but in understanding one’s own European roots and return to these roots with understanding of all particular details in the cultural and historical environment.

The Patriarch stressed that the European civilization was based on two cornerstones – Greco-Roman philosophical traditions and the Biblical Revelation. He then said that the Russian civilization, which is a direct heir to the Byzantine Empire, has managed to keep the tradition for centuries and is still viable.

The head of the Russian Orthodox Church also assured his audience that the Church did not intend to become the official state religion in the Russian Federation. He added that Russia is now one of the most secular countries in Europe and stressed that the Church was not interested even in obtaining the status that some churches possess in various European countries.

This time Kirill did not speak of the alleged concentrated attack on the Russian Orthodox Church, mentioned by him and other top clerics in previous statements. But the chairman of the Russian Lower House, Sergey Naryshkin, who delivered a speech at the same conference, filled this gap by saying that “when certain forces attempt to play on contradictions inside the society it is very important to know the history of our state, including the last 20 years of it.” Naryshkin apparently meant the revival of all major religions in the Russian Federation following the 70 years of repressions during Soviet times.

Earlier top clerics of the Russian Orthodox Church suggested that some unnamed anti-Christian forces had launched an attack on the Christian Faith, most notably with last year’s ‘punk prayer’ by the girls presenting themselves as the feminist punk band. Three members of the band were detained, tried and sentenced to two years each for aggravated hooliganism. The sentence caused a wave of protests, including a series of incidents when people desecrated icons and chopped down crosses in various regions of Russia.

This prompted parliament to quickly prepare and start to consider a draft law on insulting believers’ feelings. The current draft suggests that aggravated vandalism should be punished with up to five years in prison. The State Duma promised to approve the bill before the end of the autumn session.