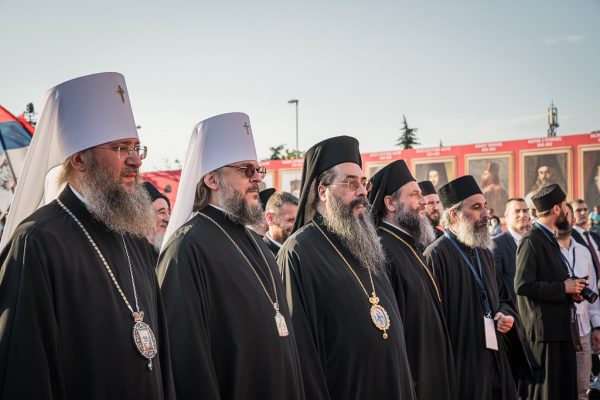 On the eve of the enthronement, the Vespers were celebrated in Podgorica, at the square of the Cathedral of the Resurrection, with the gathering of a multitude of people who filled not only the vast square but also adjacent streets. The service headed by His Holiness Patriarch Porfirije of Serbia brought together the hierarchy and clergy of the Serbian Orthodox Church, guests from Local Orthodox Churches and tens of thousands faithful Montenegrins. 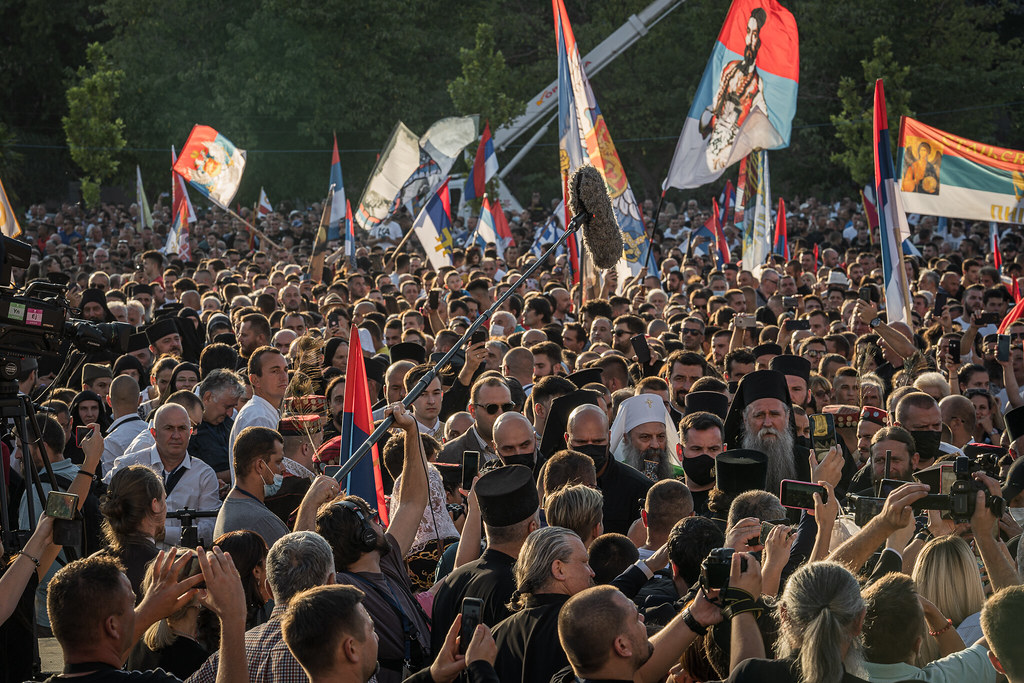 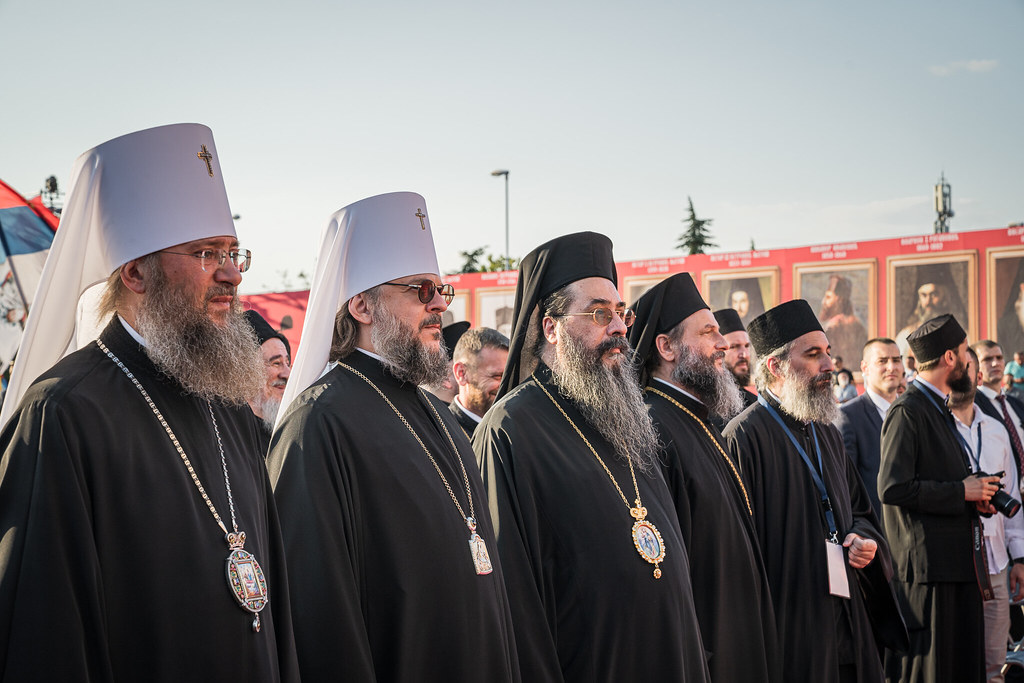 Present at the Vespers were representatives of the Montenegro government and high-ranking guests including Russian Federation Ambassador Extraordinary and Plenipotentiary V. V. Maslennikov. Before the beginning of the divine service, Montenegro Prime-Minister Zdravko Krivokapic warmly welcomed each of the hierarchs who came for the festivities.

After the divine service, Metropolitan Joanikije addressed His Holiness Patriarch Porfirije of Serbia with words of welcome noting in particular that the Patriarchal ministry ‘is the service of reconciliation and unification’.

Then His Holiness Patriarch Porfirije of Serbia addressed the Montenegrin people with words of love and peace, calling upon the Orthodox Christians of the country to support the newly elected Metropolitan Joanikije of Montenegro and the Littoral. 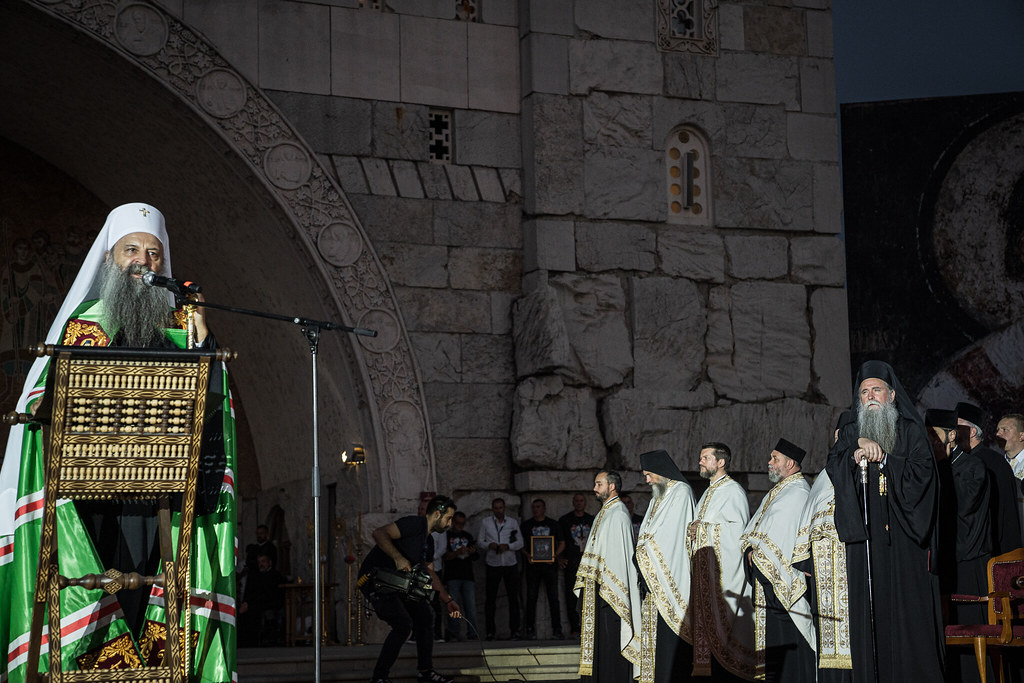 Speaking about those who oppose the enthronization of Metropolitan Joanikije, His Holiness said that the Orthodox Christians should pray for them but also pray ‘that our hearts may extend up to the heaven so that there may be an entrance to our hearts’. “Because we as Orthodox Christians know: regardless of how one sees and experience oneself, how one sees oneself in accordance with one’s national orientation, what political view of the world one has and to what world one belongs, we are all one,” Patriarch Porfirije said noting that the Church ‘is a place for us all’.

Then the guests proceeded to the crypt of the Cathedral of the Resurrection in which His Holiness Patriarch Porfirije of Serbia offered prayers for the deceased at the burial place of the late Metropolitan Amfilohije.

At the end of the event, the cathedral square was illuminated with fireworks. People joyfully greeted their Patriarch and Metropolitan Joanikije and lighted candles. 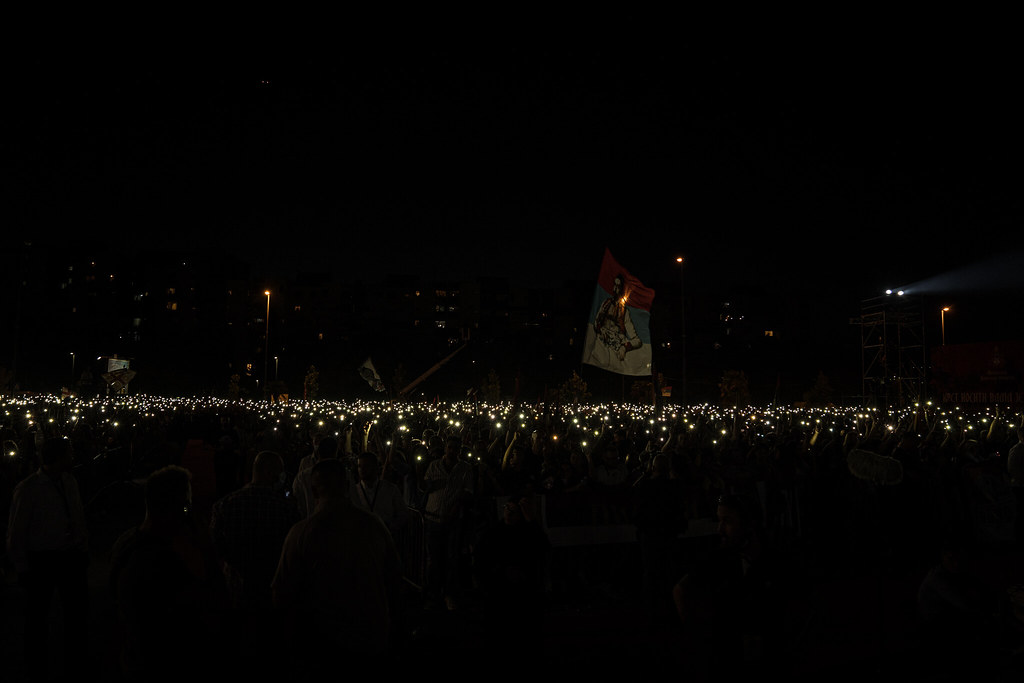 Attempts were made to hinder the festivities in Cetinje by radical people who were supported by the president of the country M. Jukanovic, who had repeatedly spoken against the canonical Church. As an atheist by conviction, Milo Jukanovic lobbied the interests of the schismatic structure ‘The Montenegrin Orthodox Church’ not recognized in the Orthodox world.

The radicals blocked the roads leading to the Monastery of the Nativity of the Mother of God in Cetinje.

Early in the morning, a column of buses carrying hierarchy and clergy set off for the Cetinje monastery but found barricades on their way surrounded by several dozens of aggressive people, who held the traffic. The column peacefully made a U-turn and drove back.

The participants in the festivities attended the Divine Liturgy at the Cathedral of the Resurrection of Christ in Podgorica. That time, in spite of well-grounded fears to his personal safety, His Holiness Patriarch Porfirije arrived to the Cetinje monastery in helicopter to administer the enthronement of His Eminence Joanikije at the place where all the Metropolitans of Montenegro were enthroned. Not numerous but loud and aggressive, politically engaged opponents to the lawful and canonical enthronement of Metropolitan Joanikije were not ready to such a turn of the events.

The Patriarch’s concelebrants included the elected Metropolitan Joanikije of Montenegro and the Littoral, Bishop David of Kruševac and an assembly of the clergy. After the service, Bishop David read out the resolution of the Bishops’ Council of the Serbian Orthodox Church on the election of His Eminence Joanikije. 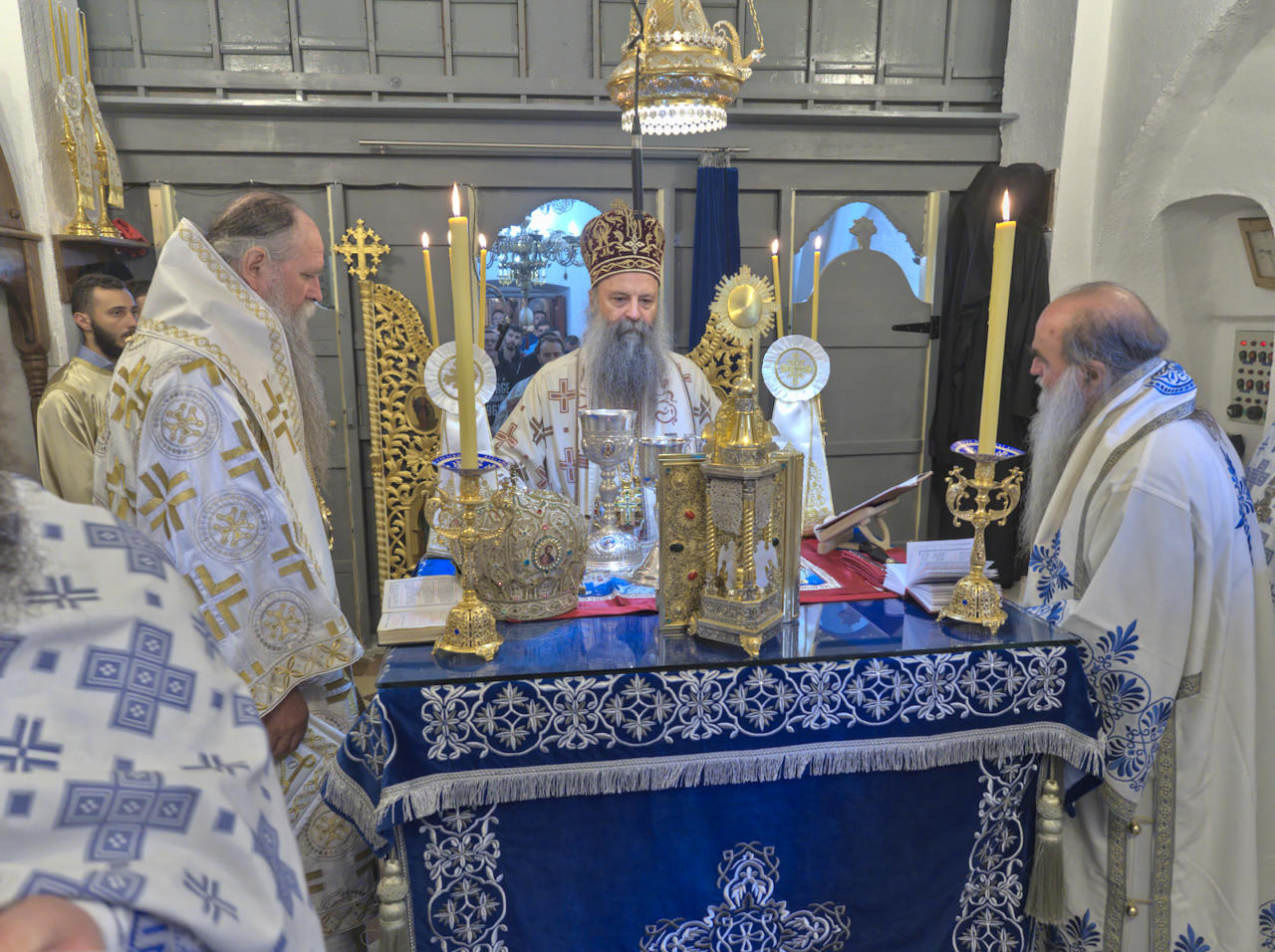 Addressing Metropolitan Joanikije at the presentation of the crozier to him, Patriarch Porfirije reminded him of the difficulties and responsibility of the service he was accepting. ‘Your mission will lie in blunting edges, building bridges, not asking who is who, to which nation one belongs… but asking only the name one was given when one was baptized in the name of the Father and of the Son and of the Holy Spirit’, His Holiness stressed noting that ‘in the Church there are neither borders, nor enmity, nor divisions’, ‘she gathers together everybody through Christ and in Christ’.

Metropolitan Joanikije, in his turn, underlined, ‘By your coming, Your Holiness, and by your present concerns that you have shared with us, you have shown great love not only for me, but also for the whole people of Montenegro. Coming with you, Your Holiness, are representatives of holy Churches of God who bear in their souls the pleroma of Universal Orthodoxy; they have gathered together to share joy with us, but they were prevented from coming to Cetinje. However, they are praying today in the church of the Resurrection of Christ next to the grave of Metropolitan Amfilohije of blessed memory… Together with you they have lifted up prayers for peace, reconciliation and love among brothers’.

After the reading of the Gospel during the Liturgy, it was announced that the enthronement of Metropolitan Joanikije in the Cetinje monastery was accomplished. It caused an outburst of applause with loud exclaims ‘Axios!’

Congratulations were extended by representatives of Local Orthodox Churches.

Metropolitan Ambrose of Tver and Kashin, who came with a blessing of His Holiness Patriarch Kirill of Moscow and All Russia, conveyed to His Eminence Joanikije a congratulatory message and best wishes from the Primate of the Russian Orthodox Church. A message of greetings from the chairman of the Moscow Patriarchate Department for External Church Relations, Metropolitan Hilarion of Volokolamsk, was also read out.