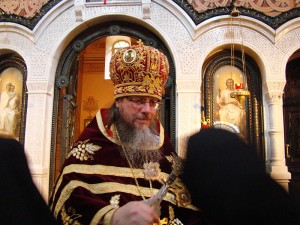 On April 20, 2013, Akathistos Saturday, His Eminence Archbishop Mark of Berlin and Germany elevated Hieromonk Roman (Krassovsky) to the rank of hegumen during Divine Liturgy in Holy Ascension Convent on the Mt of Olives. The Synod of Bishops of the Russian Orthodox Church Outside of Russia has confirmed Fr Roman as the Chief of the Russian Ecclesiastical Mission in Jerusalem.

On Sunday, April 21, the Fifth Sunday of Great Lent, Archbishop Mark officiated at Divine Liturgy at St Mary Magdalene Convent in Gethsemane; he was joined by Hegumen Roman and Archimandrite Isidor (Minaev), Head of the Russian Ecclesiastical Mission of the Moscow Patriarchate, as well as other clergymen of the missions and visitng clerics. During the minor entrance, His Eminence elevated Fr Roman to the rank of archimandrite. Praying at the service were Abbess Elizabeth of Gethsemane Convent and Abbess Moisseia of Holy Ascension Convent on the Mt of Olives, member of the Inter-Council Presence of the Russian Orthodox Church.

Vladyka Mark then congratulated Fr Roman and gave him an abbot’s staff. “You must take care,” said Vladyka Mark, “that your flock does not stray one step away from Christ, that it keeps to the narrow and straight path that the Lord indicated and that the Holy Fathers showed us. A great duty is being laid on your shoulders, the Synod of Bishops entrusted you with this obedience, the Synod of Bishops elevated you from Acting Chief to Chief of the Mission. We are happy for our flock, for our monastics and pilgrims, that in your person they will have a wise leader who will guide their steps, their thoughts and feelings, and will protect them from false teaching and false beliefs.

“I also wish to thank Fr Isidor for having accepted Fr Roman as a brother from the moment he arrived, and I ask him to continue to help him, so that in all that we do there would be unity, and that our two Missions cooperate with each other.”

Archimandrite Isidor then congratulated Fr Roman on his elevation to the rank of archimandrite and gave him a silver cross.

Fr Isidor noted that “the existence of two Missions in the Holy Land does not demonstrate division, as it might seem, but speaks of the overall size, both spatial and spiritual, of Russia, the Russian Church and the Russian diaspora. The fact that the Holy Land has not one but two Mission Chiefs, shows that this is a great and large Church and this a great and large Mission, not that there is a division in conflict, because we conduct joint divine services, we commune of one Chalice, and we help each other.”