Source: OCA
Metropolitan Tikhon of All America and Canada | 29 May 2020 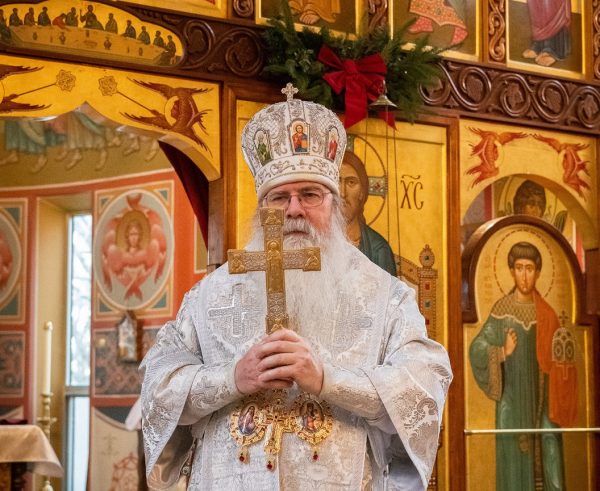 On Thursday May 28, 2020, His Beatitude Metropolitan Tikhon celebrated the feast of the Ascension of our Lord and Savior Jesus Christ at the Monastery of Saint Tikhon of Zadonsk.

At the conclusion of the service Metropolitan Tikhon offered the following sermon.

I greet you all in the joy of the feast of the Ascension of our Lord, God, and Savior Jesus Christ! Indeed, the Ascension is a feast of inexpressible joy. We celebrate an awe-inspiring event today: Jesus Christ, a human being like us, ascends into heaven, and is enthroned forever at the right hand of the Father. The hymns of our Church tell us that “Angels marvel to see a Man high above them”, and “were amazed with the wonder, and beside themselves with fear.” For truly, the Son of God’s Ascension to Heaven is the Ascension of our one common human nature to Heaven. Angels marvel at this, because they never expected it. Who would expect that the Son of God would become a Man, and as a man, in a weak human form, would conquer death? And after that, who would expect Him to return to Heaven in His resurrected human body? Angels are amazed, and we too should be amazed. We have nothing to fear now, for humanity has been saved!

This amazement expressed by the angels was found earlier in the amazement and even unbelief of the Apostles when beholding the Passion and Resurrection of Christ. During His Passion, they all denied Him, fled away, or hid. After His resurrection, they were all slow to belief, questioning, and even doubtful.  These reactions can certainly be ascribed to their human weakness, but they also point clearly to the cataclysmic and humanly incomprehensible changes that were wrought by Christ: who had ever heard of someone overcoming death by his own death? Who had ever heard of a buried man rising on the third day? Who among the disciples would have expected to be walking with the Lord as they walked into the country? And now, even the angels are amazed at the ascension. But the point is not simply for us to be amazed, but to recognize the significance of these events.

As Father George Florovsky reminds us: “In the Ascension resides the meaning and the fullness of Christ’s Resurrection. [That is] The Lord did not rise in order to return again to the fleshly order of life, so as to live again and commune with the disciples and the multitudes by means of preaching and miracles. Now he does not even stay with them, but only “appears” to them during the forty days, from time to time, and always in a miraculous and mysterious manner. ‘He was not always with them now, as He was before the Resurrection,’ comments Saint John Chrysostom. ‘He came and again disappeared, thus leading them on to higher conceptions. He no longer permitted them to continue in their former relationship toward Him, but took effectual measures to secure these two objects: That the fact of His Resurrection should be believed, and that He Himself should be ever after apprehended to be greater than man.’ There was something new and unusual in His person (cf. John 21:1-14).”

This is a great consolation to us today because, “by His Ascension the Lord not only opened to man the entrance to heaven, not only appeared before the face of God on our behalf and for our sake, but likewise ‘transferred man’ to the high places. As Saint John Chrysostom says: “We who seemed unworthy of the earth, are now raised to heaven. We who were unworthy of earthly dominion have been raised to the Kingdom on high, have ascended higher than heaven, have come to occupy the King’s throne, and the same nature from which the angels guarded Paradise, did not stop until it ascended to the throne of the Lord.” God quickened and raised us together with Christ, as Saint Paul says, “and made us sit together in heavenly places in Christ Jesus” (Ephesians 2:6). Heaven received the inhabitants of the earth. “The First fruits of them that slept” sits now on high, and in Him all creation is summed up and bound together. “The earth rejoices in mystery, and the heavens are filled with joy.”

Forty days have passed since Pascha. For us today, this has been another 40-day quarantine. We rejoice that some of our parishes are now able to open, and we long for the day when all our communities can safely reopen with all deliberate care. Just as our Lord has ascended to Heaven, we look to “ascend” to the fullness of Church life again, bit by bit. We long to be in Church, and to be with God and with one another, for the Church is the foretaste of the Kingdom of Heaven.

My beloved children in the Lord, let us remain strong in faith, assured in the hope that Christ who ascended into heaven will come again.

May we all continue to sing and glorify His saving ascension.