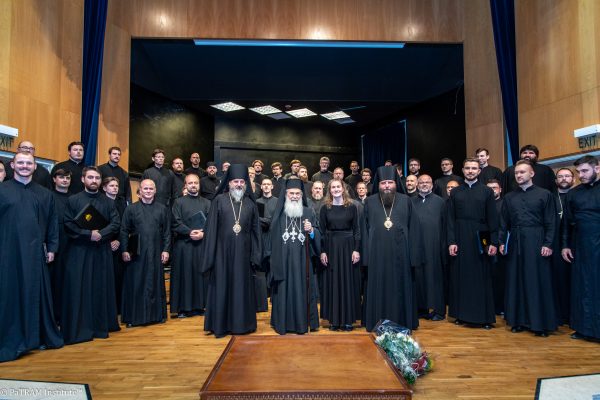 The event was attended by His Beatitude Theophilos III, Patriarch of Jerusalem and All Palestine, His Grace Bishop Theodosius of Seattle, His Grace Bishop Nicholas of Manhattan, the heads of the Russian Ecclesiastical Missions of the Russian Orthodox Church Outside of Russia and the Moscow Patriarchate – Archimandrite Roman (Krassovsky) and Archimandrite Alexander (Yelisov), respectively, Ambassador Extraordinary and Plenipotentiary of the Russian Federation to Israel AD Viktorov, Ambassador Extraordinary and Plenipotentiary of the Republic of Belarus ES Vorobyov, head of the mission of the Russian Federation in Palestine GL Buachidze, head of Gorny Convent Abbess Catherine (Chernysheva), head of Holy Ascension Convent on the Mount of Olives Abbess Barbara (Novikova), and head of the Gethsemane Convent Abbess Elizabeth (Smelic).

The concert was the world premiere debut of the male choir arrangement of the renowned composer’s All-Night Vigil. The choir will be producing a professional recording in the coming days at the Mount of Olives Convent.

After resounding applause from the audience, His Beatitude expressed his deep satisfaction with the choir’s performance.