His Holiness, Patriarch Kirill, Celebrated Divine Liturgy on the First Sunday of Lent 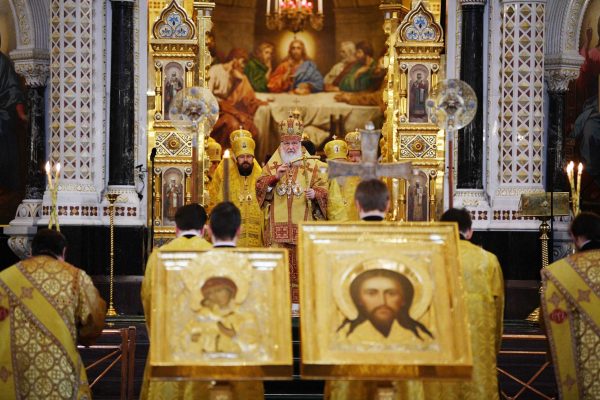 The service was broadcast live by the Soyuz TV channel.

During the Lesser Entrance, Patriarch Kirill elevated several clergy to higher ranks and granted two clerics the right to wear Doctor’s crosses according to the decision of the All-Church Doctor’s Dissertation Board.

During the Prayer of Fervent Supplication, prayers were lifted up for the unity of the Orthodox Church and for safeguarding the Church from divisions and schisms. After that, Patriarch Kirill lifted up a prayer for peace in Ukraine.

After the Service of the Triumph of Orthodoxy, Patriarch Kirill delivered a primatial homily and presented church awards to several hierarchs.

In conclusion of the service, His Holiness said, ‘Once again I greet all of you on the occasion of the feast of the Triumph of Orthodoxy. May the Lord give us strength to preserve the joy of sharing in the life of the Church till our last breath. May the Lord help us go through Great Lent beneficially and celebrate the bright Resurrection of Christ in a dignified way’.

After the service, His Holiness, in the Throne Hall, awarded Serbian Ambassador Slavenko Terzic the Order of St. Seraphim of Sarov in recognition of his contribution to the development of relations between the Russian and Serbian Orthodox Churches and on the occasion of his 70th birthday.