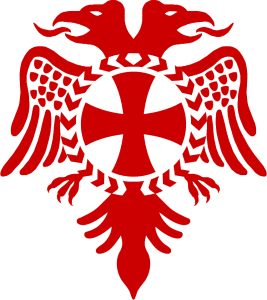 On 26 July 2013, His Holiness Patriarch Kirill of Moscow and All Russia met with Metropolitan John of Korça and Rev. Mikhail Sanellari, representatives of the Albanian Orthodox Church at the celebration of the 1025th anniversary of the Baptism of Russia.

His Holiness greeted the guests and expressed his joy at seeing the delegation of the Albanian Orthodox Church among the participants in the celebration promoting the unity of the Orthodox Churches.

Speaking about recent events in the life of the Orthodox faithful in Albania, Patriarch Kirill mentioned the consecration of the Cathedral of the Resurrection of Christ in the centre of Tirana, which took place in June 2012. As His Holiness noted, that event showed the complete revival of the Albanian Church, her parish life and church ministry.

“The mission of Ss Cyril and Methodius, founders of the Albanian Church, have united us,” His Holiness Patriarch Kirill said.

The participants in the meeting also discussed the situation in Kosovo.