His Holiness Patriarch Kirill Meets with Hierarchs of Belarusian Exarchate 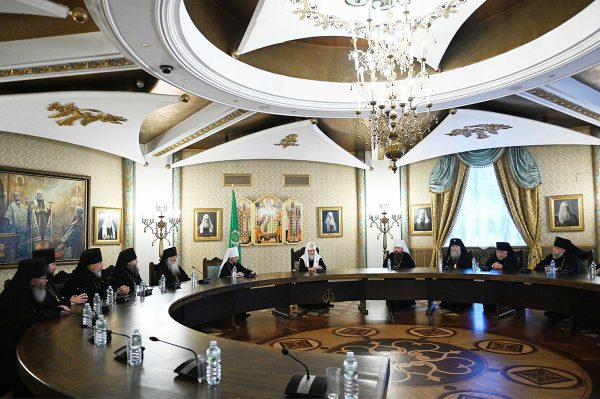 On 6th September 2020, in the Hall of the Supreme Church Council of the Cathedral of Christ the Saviour in Moscow, His Holiness Patriarch Kirill of Moscow and All Russia met with hierarchs of the Belarusian Orthodox Church. Prior to the meeting, the hierarchs participated in the Divine Liturgy, during which His Holiness elevated to the rank of metropolitan His Eminence Veniamin who had been elected Metropolitan of Minsk and Zaslavl, Patriarchal Exarch of All Belarus.

Taking part in the meeting were: Metropolitan Veniamin of Minsk and Zaslavk, Patriarchal Exarch of All Belarus; Archbishop Dimitry of Vitebsk and Orsha; Archbishop Stefan of Pinsk and Luninets; Archbishop Artemy of Grodno and Volkovysk; Archbishop Gury of Novogrudok and Slonim; Archbishop Ioann of Brest and Kobrin; Archbishop Stefan of Gomel and Zhlobin; Bishop Serafim of Bobruysk and Bykhov; Bishop Leonid of Turov and Mozyr; Bishop Pavel of Molodechno and Stolbtsy; Bishop Porfiry of Lida and Smorgon; and Bishop Ignaty of Polotsk and Glubokoye.

Among those who attended the meeting was also Metropolitan Dionisy of Voskresensk, chancellor of the Moscow Patriarchate, Patriarchal first vicar for the city of Moscow.

“Dear Vladykas, I once again heartily greet you.

“We are meeting in the Hall of the Supreme Church Council, and I am very glad that today you, bishops of our Church in Belarus, are sitting on the seats of the Council members. This is a special day – we have installed and robed in metropolitan’s vestment Vladyka Veniamin who was elected by the Holy Synod to head the Belarusian Exarchate, the Belarusian Orthodox Church.

“It is my great hope and we will be praying that by your ministry, Vladyka Veniamin, you will draw the episcopate and clergy even closer together. Of course, in Belarus there are no such dangerous processes that led to the terrible division in Ukraine. The archfiend laughed at the piety of the Ukrainian people, and we see that religion has become a factor of division, instead of uniting people. The deepest division in the body of the Ukrainian people is the ecclesiastical division. It engenders all the rest. Surely, it is very important that no such thing occur in Belarus. Therefore, I call upon all of you, dear Vladykas, to support Metropolitan Veniamin, to be like-minded, to serve your people, and, certainly, to work with the youth.

“The Church must be open to people, including the youth. It is bad when an impression is created that the Orthodox Church is a club for women in their 50s and older. Some want to imagine our Church like that, but it is not true at all! In reality, the Orthodox Church is the spiritual strength of our people, and they become especially aware of that at a time of cataclysms.

“When the war began, in the godless Soviet Union people poured into churches. When persecutions against the Church intensified, people found strength to attend churches, to pray and support the Church. And now we are living at a favourable time, when no one persecutes us. We are able to work just like the Lord commands us to, just like our pastoral conscience tells us to. Therefore, I would like to once again cordially greet Vladyka Veniamin and to wish that you may worthily carry out your service as Primate of the Belarusian Church, that the episcopate may support you and that altogether you may preserve the canonical Orthodoxy in the land of Belarus and the faith in the hearts of the Belarusian people.”

“We will do our best. And, Your Holiness, as a follow-up to your thought I would like to say that now is a favourable time also because earlier our people were engrossed in the vanity of their lives, in seeking worldly blessings, prosperous life or good vacation, and did not think much about the life to come. However, the pandemic and later the internal sorrow which befell our homeland have urged people to think about and seek, first of all, the Heavenly Kingdom, and may all the rest come too.

“I believe that now is a very favourable moment to speak about these things, so that everyone may hear and good changes may take place. And, perhaps, it will be more difficult to do later, if we miss this chance.”

Discussed during the meeting were various issues of church life in the Republic of Belarus.