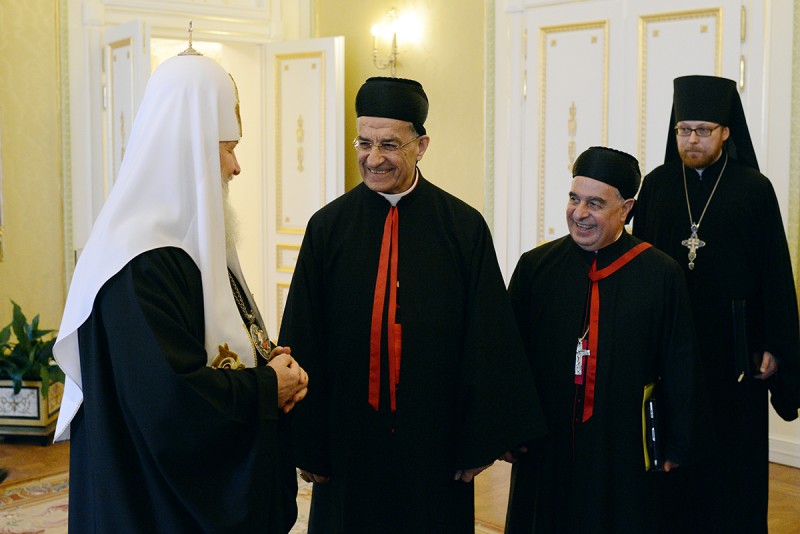 His Holiness Patriarch Kirill warmly greeted the guest, saying: “We are happy to welcome you to the Russian Orthodox Church and Russia. I treasure up in my heart the recollections of the reception you gave in my honour in Lebanon. That remarkable meeting enabled us to discuss with you and esteemed brothers the Catholic Patriarchs, whose residences are located in Lebanon, various issues of Christian presence in the Middle East. I hope that your visit to Russia will give you an opportunity to learn about the life of the Russian Orthodox Church and talk about the situation of Christians in the Middle East.

“You are the second Primate of the Maronite Church to visit the Russian Orthodox Church. Your predecessor, Cardinal Nasrallah Boutros Sfeir, was the guest of the Russian Church in the year of 1987. Our Churches have achieved much for the past twenty-five years; much has changed in the world, and the Middle East is not an exception.”

Having noted that the visit of the Maronite Patriarch coincided with the commemoration day of St Maron the Hermit of Syria, Patriarch Kirill said, “The history of your Church is closely related the life of this saint who is venerated in the Maronite Church and in the Russian Church as well. You have already visited the Church of St Maron in Moscow and presented this parish with the holy relics of St Maron brought from the Catholic diocese of the Italian town of Foligno.”

His Holiness Patriarch Kirill emphasized, “Your Church plays a special part by representing Antiochian theological tradition and Antiochian tradition of piety within the Catholic Church. It enables us to exchange our views on theological issues including the issues of the Orthodox-Catholic dialogue.”

His Holiness expressed his hope that the visit of the Maronite Patriarch of Antioch and All the East will create “new opportunities for discussing a wide range of topical issues.”

Patriarch Béchara Boutros Al-Raï addressed His Holiness Patriarch Kirill, “On behalf of the Synod of the Maronite Church and all our bishops, I would like to say that we were happy to accept your invitation to visit the Moscow Patriarchate.”

He mentioned that the delegation of the Maronite Church had attended the divine service celebrated by archbishop Arseny of Istra in the presence of numerous parishioners on the commemoration day of St Maron. The Maronite Patriarch noted the importance of strengthening good relations between the Syriac Maronite Church of Antioch and the Russian Orthodox Church.

He conveyed to His Holiness Patriarch Kirill greetings from Cardinal Nasrallah Boutros Sfeir and from H.E. Mr. Michel Suleiman, President of the Lebanese Republic.

Recollecting the visit of His Holiness Patriarch Kirill to the Patriarchal see of the Maronite Church in Bkerki on 15 November 2012, Patriarch Béchara said, “We treasure up in our hearts the recollection of your speech in which you had expressed your deep concern over the fate of Christians in Lebanon, Syria, and the Middle East, as well as your concern for Christians to have an opportunity to stay in their land and play a decent part in public life.”

Speaking about the situation of Christians in the Middle East, the Maronite Patriarch noted: “We do not want to be called minorities as we settled in this land two thousand years ago. We are not just a group of people transferred by someone to the East. We come from the East and we were here six hundred years before Islam. We will continue working with the Russian Church and with other friendly Churches and governments in order to affirm Christians’ right to citizenship in our region. We are citizens and will defend our rights.”