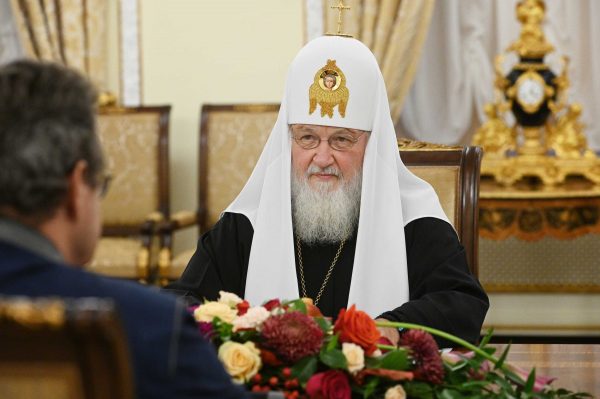 On 14th October 2019, at the Patriarchal and Synodal residence in St. Daniel’s Stavropegic Monastery in Moscow, His Holiness Patriarch Kirill of Moscow and All Russia met with Mr. Jean-René Fournier, President of the Council of States of the Swiss Confederation.

Mr. Fournier was accompanied by his spouse, Mrs. Birgit Fournier; as well as by Mr. Yves Rossier, Ambassador Extraordinary and Plenipotentiary of Switzerland to Russia; Mr. Joachim Tomaschett, deputy head of the International Relations and Multilingualism Department of the Swiss Parliamentary Services; Ms. Sophie Lachat Rohrer, scientific collaborator in the Division of Bilateral and EU/EFTA Relations at the Office of International and Interparliamentary Relations of the Department of International Relations and Multilingualism of the Swiss Parliamentary Services; and Mr. Kevin Bonvin, Economic Attaché of the Embassy of Switzerland in Russia.

The Primate of the Russian Orthodox Church warmly greeted the guest, saying: “I have special feelings towards your country. Perhaps, of all countries it is Switzerland that I visited most often because Geneva is home to the international organizations, and I used to visit this city on frequent occasions and even live there for over three years when serving as the permanent representative of our Church to the World Council of Churches and other international organizations.”

As His Holiness Patriarch Kirill mentioned, the Russian Orthodox Church traces its presence in Switzerland back to 1816, when the first parish in Bern and Geneva was established. Nowadays many Russian Orthodox Christians reside in various cities of the country, receiving pastoral care from priests of the Moscow Patriarchate, and there are beautiful Russian churches in the old town of Geneva, His Holiness noted.

“Today we maintain rather intensive inter-church relations,” His Holiness continued, “first of all, with the Protestant and Roman Catholic churches in the territory of your country. We have also established contacts with the higher education institutions of Switzerland, in particular, with the Faculty of Theology of the University of Fribourg and with the Ecumenical Institute in Bossey near Geneva.”

During the meeting with the President of the Swiss Council of States the Primate of the Russian Orthodox Church pointed out that while being a modern democratic and secular state, Russia preserves and upholds the traditional Christian values. “It is our deep conviction that the democratic organization of the state must not necessarily imply the total secularization and ousting of the Christian, religious values from the life of society,” Patriarch Kirill added.

His Holiness expressed his alarm over the processes taking place in the Western countries these days, when religious, traditional values are being ousted from the life of society and declared incompatible with its democratic and secular organization. “Russia is also a secular state, but in our parliament there is an inter-fractional group of deputies working to uphold Christian values in our country,” Patriarch Kirill said, “It is not only the work of the Church, but also of the parliamentarians and the public. We have established good relations with the parliament, engaging in the dialogue with the parliamentary parties. The Church supports neither of them – nor the right ones, nor the left ones, nor the centrists, but engages in dialogue with each of the parties in the parliament, appreciating this opportunity to exchange opinions and make contribution to the development, among other things, of the democratic structure of our country. Yet, the main thing is to preserve moral values, without which a person’s life is exposed to great danger.”

Having mentioned the forthcoming parliamentary elections in Switzerland, His Holiness pointed out that the problems which worry the Swiss voters, such as social inequality, ecological issues, climate change, immigration processes, also cause concern in Russia and in other countries. “It indicates that these problems have a global dimension, that they are not attached to a specific country, a specific culture. And I am deeply convinced that we should solve them together,” the Primate of the Russian Orthodox Church said, noting the significant role of the international organizations, whose headquarters are located, in particular, in Switzerland, as well as the importance of bilateral relations between countries and of a wider dialogue, engaging in which is also the Russian Orthodox Church.

Mr. Jean-René Fournier thanked His Holiness for the warm hospitality, saying in particular: “I am especially grateful for the time that you devote to us, since I believe that it is impossible to understand the present-day Russia without a serious and thorough dialogue with the Russian Orthodox Church.”

“I have come here not only in my capacity as President of the Council of States, but also as a brother in the Christian faith,” the high guest said, noting that he was raised in the Catholic faith and is a member of the Christian Democratic People’s Party of Switzerland.

Mr. Fournier expressed his support for the belief expressed by His Holiness Patriarch Kirill that the principle of state’s secularism does not imply the negation of religious, Christian values.

Having raised some of the issues that concern Christians in the West, he mentioned, in particular, the ecclesial situation in Ukraine, noting that it brings pain to the faithful of the Orthodox Church, and expressed his concern over the indifference towards faith and religious values that can be seen today in the Western countries. In Mr. Fournier’s opinion, Christians’ common witness to the universality and continued relevance of the Christian values can bring forth a response in today’s society.