On 8 July 2012, His Holiness Patriarch Kirill of Moscow and All Russia met with the delegation of young people from six dioceses of the Russian Orthodox Church Outside of Russia. The meeting took place in the Red Hall of the Cathedral of Christ the Saviour. The delegation arrived in Russia within the programme of the celebration marking the fifth anniversary of the restoration of canonical unity within the Russian Orthodox Church. 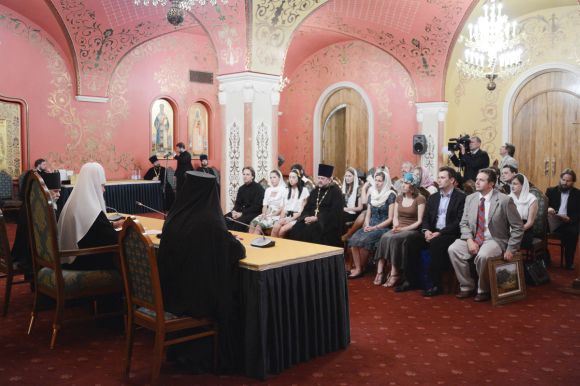 Taking part in the meeting were Bishop Panteleimon of Smolensk and Vyazma, chairman of the Synodal Department for Church Charity and Social Ministry; Bishop Theodosius of Seattle, vicar of the San Francisco and Western American diocese (Russian Orthodox Church Outside of Russia); and archpriest Andrei Sommer, deputy chairman of the Synodal Youth Department (Russian Orthodox Church Outside of Russia).

His Holiness Patriarch Kirill addressed the young people with a primatial homily and presented each of them with a book of his sermons and with an icon of St Sergius of Radonezh.

Archpriest Andrei Sommer greeted His Holiness Patriarch Kirill on behalf of the members of the delegation and presented the Primate of the Russian Orthodox Church with a painting dedicated to the 200th anniversary of the founding of Fort Ross. The picture was painted by the parishioners of the Russian Orthodox Church Outside of Russia, the Patriarchal Press-Service reports.

Note: From July 7 to 18, the youth delegation, led by Bishop Theodosius of Seattle and archpriest Andrei Sommer, has been visiting the Russian shrines, including the places related to the life of the Royal Passion-Bearers (Ganina Yama, the Church-on-the-Blood in Yekaterinburg and other places). The youth delegation of the Russian Orthodox Church Outside of Russia will take part in the ‘For Life’ International Festival of Social Technologies in Defense of Family Values, will visit the Central Clinical Hospital of St Alexis and a pregnancy crisis centre, will be told about the work of the ‘Miloserdie’ bus, a mobile centre helping homeless people.