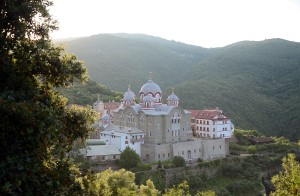 On 5 June 2013, His Holiness Patriarch Kirill of Moscow and All Russia proceeded to the Scete of the Prophet Elijah after visiting the Monastery of Pantocrator together with those accompanying him.

His Holiness celebrated a prayer service in the scete. In his address to the worshippers he shared his joy of visiting the scete, which he called a pearl of the Holy Mount. “The scete was founded by a great ascetic – the elder Paisius Velichkovsky, who late became the founder of the tradition of eldership in many countries, including Russia. During one hundred and fifty years many Russian people, simple and well-known, came here to follow their monastic calling,” His Holiness said and continued:

“One of the chapels here is dedicated to St. Metrophanes of Voronezh. Love and faith of our people are seen in its magnificent decoration. This church beauty has come into being donations. Sadly, there have been no Russian monks here since 1990s because of the well-known reasons. However, I believe and all Russian people together with our Church of many million believe that Russian monasticism will revive in this place, and the Greeks and the Russian will glorify God together.

“The Russian Church and historical Rus’ – Russia, Ukraine, Belarus and Moldova – are in the process of revival, because Orthodox faith is reviving. Thousands of churches and hundred and monasteries and convents have been opened, and we can say that this revival is God’s miracle. You can see this revival even in the increasing number of pilgrims from Holy Russia to Holy Mount Athos.”

His Holiness donated an icon of the Saviour to the scete, and archimandrite Joachim presented His Holiness with a copy of the icon of the Mother of God with which Russian Emperor Nicholas I did not part during war with the Ottoman Empire.

The Primate of the Russian Orthodox Church and his suite went to the Church of St. Nicholas the Miracleworker, sang troparia to the saint and to the Mother of God and venerated her icon called “Milkgiver.”