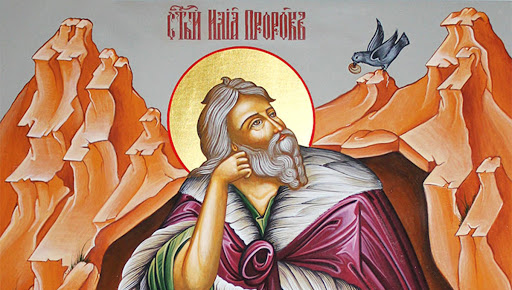 The prophet Elijah (whose feast day is July 20/ August 2) is perhaps best known for his final ascent to heaven in a chariot of fire. He is also famous for being fed by a raven, and also for the dramatic contest on Mount Carmel.

This last event was arguably the pinnacle of his prophetic career. Elijah served God in very dark days. Israel had always carried on a foolish and fatal dalliance with pagan gods such as Baal (the Canaanite god of storm, rain, and fertility) ever since first arriving in the Promised Land, and the prophets had always rebuked this idolatry and called the people back to pure fidelity to Yahweh alone. But in the days of Elijah, this idolatrous attachment to Baal was not simply a widespread popular sin; it became established government policy.

King Ahab, aided (and perhaps driven) by his queen Jezebel, a Sidonian who of course worshipped gods other than Yahweh, was determined to pursue of a policy of religious syncretism. Part of his motivation for this was political, for by enshrining Baal as the national god of Israel, he was thereby bringing his country into the international religious mainstream, which had economic benefits for all concerned. Ahab did not want to outlaw the worship of Yahweh. Yahweh could still be worshipped along with the other gods, though He would no longer be the dominant deity. What Ahab did outlaw was the pure Yahwism and the exclusive worship of Yahweh espoused and promoted by men such as Elijah, for Elijah was telling everyone that the King’s policy of syncretism and Baal worship was evil and should be resisted.

Elijah roundly declared that worshipping any god other than Yahweh was sinful idolatry, a sin which would bring divine wrath upon the people—wrath promised by Yahweh in the Law should the people break His covenant and worship idols. One part of this wrath consisted of drought (Deuteronomy 28:23-24), and it was just this judgment that Elijah brought upon Israel in God’s name: “As Yahweh God of Israel lives, before whom I stand, there shall be neither dew nor rain these years, except by my word” (1 Kings 17:1). And so the drought began, and the people began to suffer and die. As far as King Ahab was concerned, Elijah was a traitor and a criminal, a troubler of Israel who afflicted the people and who deserved death (1 Kings 18:17).

The battle therefore was joined, and the followers of Elijah who denounced the royal policy were rounded up and killed. Elijah especially was a wanted and hunted man, for there was no nation or kingdom where Ahab had not sent to seek for him; and when they would say, “He is not here”, Ahab would insist that they swear an oath that they had not found him (1 Kings 18:10).

The contest on Mount Carmel occurred as the climax of this story of national suffering, prophetic rebellion, and international intrigue. The drought could not go on indefinitely, and so Elijah called the people to a final showdown on Mount Carmel to decide once and for all which policy should be followed—either the syncretism of Ahab or the exclusivist Yahwism of Elijah.

The story of the contest is well known: at Elijah’s suggestion, two altars were set up, with a bull cut up and laid upon each one, but no fire lit to consume the offering. The rival groups would call upon their god and whichever god answered the plea by sending fire from heaven (i.e. lightning) to consume the sacrifice would be acknowledged as the true God. If Baal answered with fire, the people would worship Baal and forget Yahweh; if Yahweh answered, the people would worship Yahweh alone and not Baal. The people agreed.

At Elijah’s suggestion, the worshippers of Baal went first, since they were the more numerous. Four hundred and fifty prophets of Baal were there to press their cause (and to seize Elijah afterward to bring him to Ahab for execution), as well as another four hundred prophets of Baal’s asherah or consort. From morning until noon they limped around the altar, shouting and calling upon Baal the storm god to send lightning and consume the sacrifice. About noon Elijah cried out to encourage them: “Shout louder! He’ll hear you for sure, since he’s a god! Maybe he’s busy thinking about something, or is on the toilet! Or maybe he’s off on business trip! Or maybe he’s dozed off and needs you to wake him up!” (I paraphrase; the actual words can be found in 1 Kings 18:27.) Elijah was not just mocking the devotees of Baal; he was also deliberately insulting Baal himself, thus inviting Baal’s wrath—assuming of course that Baal had any real power. Which of course he did not, as Elijah’s insults were pointedly demonstrating.

The Baal worshippers didn’t give up. They worked themselves into a bloody frenzy (literally), cutting themselves with knives. They raved on with their prophetic invocations (the Hebrew word for “rave” and “prophesy” is the same word) until late afternoon, until they finally collapsed in exhaustion. Then it was Elijah’s turn.

His demeanour was calm and confident, a studied contrast to the frenzy of the worshippers of Baal. He bid the people draw near, and took twelve stones to repair the altar of Yahweh, thereby calling the twelve tribes back to their ancestral allegiance.   Then he dug a trench around the altar and asked the people to soak the offering with water, making it harder to ignite. They soaked the offering, and then (at Elijah’s word) soaked it again. And then again a third time.   Then Elijah the prophet prayed a simple prayer, asking Yahweh to send fire from heaven and turn the people’s hearts back to Him.

Immediately the fire of God fell from heaven, and consumed the offering and the wood under it and the stones and the dust and licked up the water filling and overflowing the trench. The people fell on their faces, crying “Yahweh! He is God! Yahweh! He is God!” Elijah commanded them to seize the idolatrous prophets of Baal and execute them for their apostasy even as the Law demanded.

This contest should have decided the future policy and turned the tide back to the exclusive worship of Yahweh. Instead, it merely intensified royal fury, and Jezebel swore that she would have Elijah dead within twenty-four hours. Elijah, alone, friendless, and forsaken, fled for his life, departing from Mount Carmel in the north to Beer-sheba in the extreme south of the country. There he stopped and prayed that he might die. He had utterly failed: failed in his mission to turn Israel back to God, failed to stop the juggernaut of royal power, and more importantly, he had failed Yahweh Himself. He determined to head further south to Mount Horeb, the historic origin of Yahwism, and there to confess to Him his failure, and ask that he might die.

He came to Mount Horeb, and God asked him why he wanted an audience with Him. “Because despite my zealous work, the people have forsaken Your covenant, thrown down Your altars, and killed Your prophets. I alone am left, and they are even now seeking my life too”. Waiting for his requested audience, Elijah saw a storm, which broke the rocks. And then came an earthquake, and then a fire, but Yahweh’s presence was not in any of these. Then, after all these, came the sound of quiet blowing or gentle breeze. And Yahweh’s presence was there. But what sound does a quiet breeze make? None, though it can be felt. What Elijah experienced was a silence that could be felt, but not heard. And Yahweh was there in that vast and pregnant silence. Yahweh inquired again why Elijah had requested such an audience and he repeated his cry of resignation, of failure, and despair. He had no choice, he felt, but to give up and die.

But God did not accept his despair or his resignation. Instead, he told him to return to work. For there was much work to do: Elijah must travel far north to Damascus and anoint Hazael king over Syria, and then south to Israel to anoint Jehu king over Israel, and then anoint Elisha as his successor. No time for grieving over failure; no time to waste. And Elijah was not alone, for God had left seven thousand in Israel who like Elijah were loyal to Him and not had bowed the knee to Baal. There was hope for the future.

Yahweh’s word to despairing Elijah speaks to us in our times of despair, discouragement, and anguish too. Life in this vale of tears contains events which tear at the heart and wear out the soul: the loss of children, the break-up of marriage, depression, unemployment, chronic pain, increasing dementia in old age. None are exempt from all the shocks that mortal flesh is heir to, and all eventually join Elijah in wanting to give up and be gathered to their fathers. What do we do then?

First, we must seek the presence of God that is found only in silence. Our world contains noise and tumult, and we see wind, and earthquake, and fire all around us. But God is not in the wind, the earthquake, or the fire. He is to be found in the silence, and it is there we must seek Him and find new strength.

Second, we must return to our places, and persevere in our assigned tasks, mindful of that little used four letter word, “duty”. God will do what seems good to Him, and we have been promised that all things will work together for our good in the end. Our sole task is to do our duty, and work away at whatever God has asked us to do.

Finally, we must take heart and know that though we may feel isolated and helpless, we are not alone. We march as part of an army, though our numbers be scattered throughout the world. We may be only a little flock, a tiny band of brothers on earth, but we are joined by an innumerable army of saints and angels watching us, praying for us, and cheering for us in the heavenlies. Elijah had the assurance that he was but one of seven thousand; we have the assurance that we are joined by an even greater multitude. Let us fight on and not heed the wounds inflicted by the world. A chariot of fire is waiting to take us home.

Recently I was reading about two very different people: William Barclay (whose works I have been familiar with…

It is, I suppose, a sign of how strange and ubiquitous the internet is that I often receive…

Patriarch Kirill Says He Is Strongly…