His Holiness Patriarch Kirill: We are witnessing revival of Chinese Orthodox Church 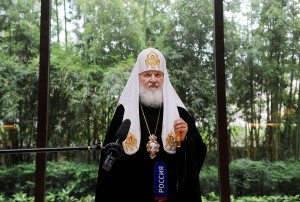 On 15 May 2013, after celebrating the Divine Liturgy in the building of the former Cathedral of the ‘Helper of Sinners’ Icon of the Mother of God in Shanghai, the Primate of the Russian Orthodox Church answered questions of Russian and Chinese mass media reporters.

As Patriarch Kirill noted, the dynamic development of all spheres of public life in China goes along with the revival of religious life.

“If only some segments of public life had been developing while others had not, it would have caused tension and brought no benefit to society,” Patriarch Kirill said. “Today we are witnessing the revival of the Chinese Orthodox Church which has existed in China for three hundred years and which, as you know, went through difficult trials in the 20th century as all Chinese people did.”

“My visit to China became possible as a result of positive development in the Chinese society. I am visiting China at the invitation and with the support of the Chinese leadership. It indicates that authorities of the country realize the importance of religious factor in the life of the people and in the development of relations between Russia and the People’s Republic of China,” His Holiness continued.

The Primate of the Russian Church appreciated the results of his visit, making a special mention of the Divine Liturgy celebrated in Shanghai, which had gathered a lot of the faithful, both the Chinese and Russians, Ukrainians, Byelorussians, Moldavians, Georgians, Greeks, and Serbs who constitute one single community of the Chinese Orthodox Church.

Answering a question about prospects of reviving the church life in China, Patriarch Kirill reminded the journalists that Russia and China had signed the Action Plan for the Realization of Provisions of the Treaty of Good-Neighborliness and Friendly Cooperation between the Russian Federation and the People’s Republic of China. The Plan, in particular, stipulates the development of cooperation between the China’s State Administration for Religious Affairs and the Russian Presidential Council for Cooperation with Religious Organizations. “We have reached certain agreements aimed at normalizing the situation of the Chinese Orthodox Church,” His Holiness said. “According to them, two students from China are now studying at theological schools of the Russian Orthodox Church.”

The Primate of the Russian Orthodox Church shared with those present his warm recollections of common prayers with the Orthodox faithful in China, saying, in particular “I have had a special feeling today while celebrating the Divine Liturgy at the Shanghai Cathedral, almost fifty years after the Liturgy was last celebrated here after the Church was closed. It was very touching to meet with the Chinese clergymen. Fr. Michael Wang Quansheng and Fr. Evangelos Lu Yaofu, who have concelebrated with me, are people of very advanced age; they were ordained in 1950s. Meeting with these people has been of great symbolic significance for me.”

Patriarch Kirill described his meeting with the President of the PRC as “an open dialogue indicating that the Chinese leadership is open to discussing all issues, including those of religious life in China.”

“I would like to wish success to the Chinese leadership and all the Chinese people,” His Holiness said, summarizing his visit. “I hope that social transformations currently under way in the country will result in further development of political, social, economic, and, of course, religious life in China and that the Chinese Autonomous Orthodox Church will find its rightful place in it.”