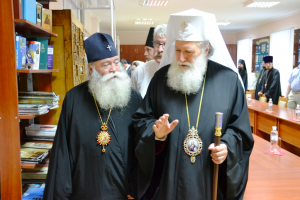 On 29 July 2013, His Holiness Patriarch Neophyte of Bulgaria, who came to Kiev for the celebration of the 1025th anniversary of the Baptism of Russia, visited the Kiev theological schools.

Metropolitan Antony greeted the guest, noting that the Kiev Theological Academy and the Bulgarian Orthodox Church have deep-rooted historical ties: many distinguished Bulgarian hierarchs and scholars studied at the Kiev Academy.

His Holiness Patriarch Neophyte was invited to the excursion around the Academy and its Church-Archeological Museum and then met with the faculty.

Patriarch Neophyte told those present at the meeting that he used to work as a rector of the Theological Academy and then as a dean of the Faculty of Theology, and noted the necessity of cooperation in theological education. Metropolitan Antony of Borispol told the guest that the Kiev theological schools are developing cooperation with foreign educational institutions, and expressed his hope that an agreement on cooperation will be signed with faculties of theology of Bulgarian universities in the near future.

Most viewed articles
Patriarch Kirill: We In No Way Question the Healing Power of the Holy Mysteries of Christ!118
Hierarch from North Macedonia Gives Advice to the Ukrainian Orthodox Church113
Lessons from Saint Mary of Egypt107
On Feeling Forsaken104
Participating in God’s Vision101
Ethiopian Patriarch Thanks Patriarch Kirill For the Support During the Persecution93
Maronite Patriarch Thanks Russian Patriarch for His Support for Christians in the Middle East65
Representative of Russian Patriarch Delivers Rehabilitation Facilities to Children in Syria40
Sunday of the Samaritan Woman3
Food for the Journey1
Most popular authors
Pravmir.com team429
Justin Doty107
Archpriest John Moses (+2019)104
Priest Dustin Lyon101
Dcn. Michael Schlaack1