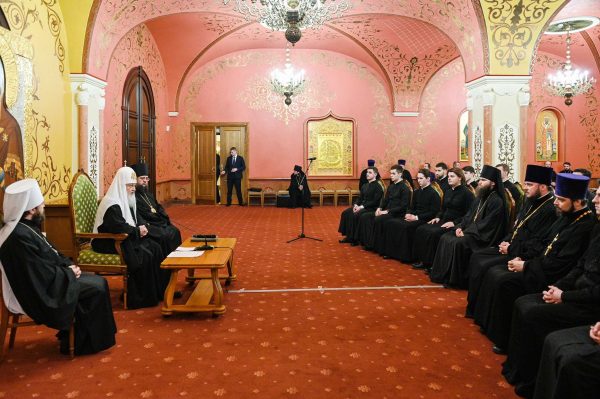 On 29 January, 2020, His Holiness Kirill, Patriarch of Moscow and All Russia, met with the rector, professors and students of Kiev Theological Academy and Seminary (KTAS) who are making a pilgrimage to Russia in the period from January 27 to February 2, 2020. The meeting took place at the Red Hall of the Cathedral Church of Christ the Saviour.

The trip is made as part of the program organized by the Moscow Patriarchate department for external church relations (DECR) with the participation of the Ss Cyril and Methodius Institute of Post-Graduate Studies.

Participating in the meeting were Metropolitan Hilarion, DECR chairman and rector of the Ss Cyril and Methodius Institute; Bishop Silvestre of Belogorodka, rector of the KTAS; Archpriest Alexander Ageikin, rector of the Cathedral of the Epiphany in Moscow; Archimandrite Leontiy (Tupkalo), conductor of the KTAS academic choir; Archpriest Sergiy Veigo, associate professor and assistant to the KTAS rector for representation work; and Archpriest Igor Yakimchuk, DECR secretary for inter-Orthodox relations.

Patriarch Kirill addressed the gathering, touching in particular on the problem of the church schism in Ukraine.

After that, His Holiness answered questions asked by the guests from Ukraine. One of the KTAS students noted the special attention His Holiness gives to the younger generation and asked about the most important thing to be considered by theological graduates’ in deciding their course of life.

“It is that case when I will not be able to answer in one word”, His Holiness said, “For some, one thing is important while for another a different one. One is scientifically inclined, while another sings beautifully in a church choir. One will be a theologian, while another a Protodeacon. It very much depends on individuality, which is the most important thing”.

“And if we move to the philosophical level of reasoning, the most important things, from my point of view, are two factors”, he continued, “the first is the state of a person’s intellect while the second is the state of a person’s heart. One can be a very smart and well-educated man, but if his system of values is broken, if he is prone to influences and temptations, it will never amount to anything”.

But if, he said, a man has a good heart but intellectually is not sufficiently developed, then “his contribution to the life of the Church will also be limited; he may do much for his personal salvation but will hardly be successful in preaching the Gospel to modern man or in his work with the youth, and so on”.

“Therefore, my answer is this: depending on one’s talents and abilities, everyone should choose for oneself a certain existential dominant. But if we try to average all this and say how a modern Orthodox priest should act in this coordination system, I would say this: without a sincere faith and sincere devotion the service of a priest will never be successful”, His Holiness underscored.

After the talk, Bishop Silvestre, on behalf of the Ukrainian pilgrims, thanked the Primate of the Russian Orthodox Church for the meeting.

Patriarch Kirill gave each pilgrim a copy of the book “The Holy Council. Towards the Pan-Russian Church Council of 1917-1918 and Restoration of Patriarchate in the Russian Orthodox Church” and a collection of his sermons entitled “Only Life. Dialogue with Youth” and an icon of the Nativity of Christ.

The students presented His Holiness with the KTAS’s editions including issues of the students’ “Academy Chronicler”, an educational aid for the second-grade seminarians “Dogmatic Theology” edited by Bishop Solvestre and the Biographical Dictionary of the Kiev Theological Academy in three volumes.

On December 27, the delegation attended the opening of the 28th International Christmas Educational Readings.

The KTAS representatives have already visited the St. Sergius Laura of the Holy Trinity, the Khotkov and Sretensky Patriarchal Monasteries and familiarized themselves with the education system and traditions of the Moscow Theological Academy and the Sretensky Seminary.

In the morning of February 1, the anniversary of the enthronement of Patriarch Kirill of Moscow and All Russia, they will take part in the Patriarchal divine service at the Church of Christ the Saviour in Moscow and in the evening will visit the Patriarchal Convent of the Conception.

On February 2, the pilgrims will participate in the Divine Liturgy at the church of Our Lady the Joy to All the Afflicted-in-Bolshaya Ordynka.