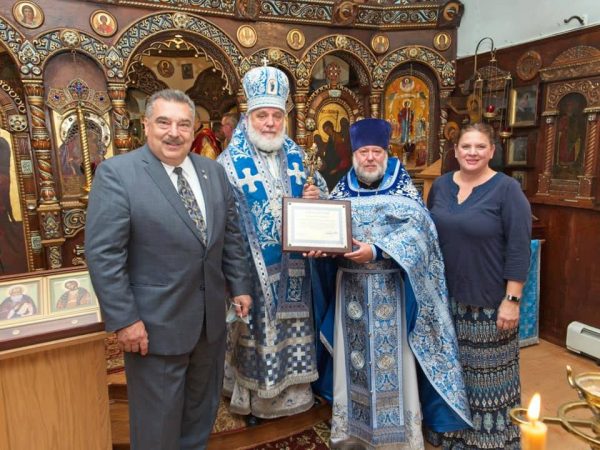 This year, Holy Intercession Church in Glen Cove, NY prayerfully marked the 70th anniversary of its founding and the consecration of the church. On November 26, 1951, it was founded by the ever-memorable Metropolitan Anastassy (Gribanovsky; +1965), the second First Hierarch of the Russian Church Abroad. The parish council resolved to hold the anniversary celebrations concurrent with the parish’s patronal feast – the Protection of the Most Holy Theotokos. With the blessing of Metropolitan Hilarion of Eastern America & New York, the celebrations were officiated by Archbishop Gabriel of Montreal & Canada, who paid the parish an archpastoral visit.

After the reading of the Gospel, Fr. Alexandre greeted parishioners with the feast, and after the anointing presented special gifts to the parish’s long-time workers and worshippers. On behalf of the parish, Archbishop Gabriel was presented a cross and panagia set, produced by jewelers in Moscow.

Upon completion of the service, the sisterhood organized a supper for all in the parish hall.

On Thursday, October 14, the feast of the Protection of the Mother of God, parish treasurer Vladimir Mikhailichenko greeted Archbishop Gabriel with bread and salt and a word of warm welcome, after which the hierarch entered the church and celebrated the festal Liturgy. Concelebrating with His Eminence were:

At the reading of the hours, young parishioner Andrew Pavlovic was tonsured a reader.

Present in church during the divine service was city Mayor Tim Tenke, representatives of the municipal government, and Dmitry S. Chumakov, First Deputy Representative of the Russian Federation at the United Nations. Despite its being a weekday, a large number of parishioners gathered for the festal services, most of whom communed of Christ’s Holy Mysteries.

Upon completion of Liturgy, a short moleben was served to the Most Holy Theotokos. Archbishop Gabriel greeted those gathered, congratulating the clergy and faithful with the feast, much beloved by the Russian people, and spoke about the history of the church and the people who once served, labored, and prayed here. His Eminence sincerely thanked the rector and parish council for their labors in the church building and the parish school. He also welcomed the mayor of the city and the Russian state representative.

The rector thanked the parishioners for their prayers and their dedication to the church, and presented parish council members and other parish assistants memorial gifts: Athonite-style icons and other treasured items. Mayor Tenke congratulated the rector and parish on the occasion of their jubilee, and presented Fr. Alexandre a memorial certificate commemorating the parish’s 70th anniversary.

The protodeacon intoned the Polychronion for the clergy and all of the parishioners. The sisterhood invited everyone to a festal luncheon, during which many kind words were spoken. Dmitry S. Chumakov presented gifts to the parish from the Honorable Vassily A. Nebenzia, the Plenipotentiary Representative of the Russian Federation at the United Nations.

As a result of the ongoing Coronavirus pandemic, the festal celebrations were held in accordance with all established sanitary recommendations.