The Image of the Most-holy Trinity, and, except in certain special cases (such as monasticism, for example), he is not intended by God to live alone, but in a family situation. Just as God blessed the first humans, Adam and Eve, to live as a family, to be fruitful and multiply, so too the Church blesses the union of a man and a woman.
admin | 20 October 2005

In the theology of the Orthodox Church man is made in the Image of the Most-holy Trinity, and, except in certain special cases (such as monasticism, for example), he is not intended by God to live alone, but in a family situation. Just as God blessed the first humans, Adam and Eve, to live as a family, to be fruitful and multiply, so too the Church blesses the union of a man and a woman.

Marriage, however, is not a state of nature, but is rather a state of grace, and married life is a special vocation (no less than the special calling of monasticism), requiring a gift or charism from the Holy Spirit – this gift being conferred in the Sacrament of Holy Matrimony. 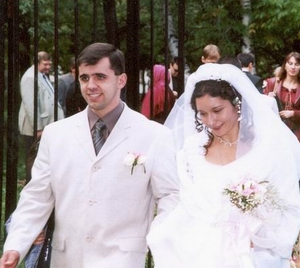 That Holy Matrimony has divine sanction comes no less from the words of the Lord Himself, Who says: Have you not read that He Who made them from the beginning made them male and female, and said, ‘For this reason a man shall leave his father and mother and be joined to his wife, and the two shall become one flesh [Gen. 2:24]? So they are no longer two but one flesh. What therefore God has joined together, let not man put asunder (Matt. 19:5-6).

The Holy Apostle Paul sees this mystical union of husband and wife as reflecting the mystical union of Christ with His Church: Wives, be subject to your husbands, as to the Lord. For the husband is the head of the wife as Christ is the head of the Church, His body…. Husbands, love your wives, as Christ loved the Church and gave Himself up for her…. Even so husbands should love their wives as their own bodies. He who loves his wife loves himself. For no man ever hates his own flesh, but nourishes and cherishes it, as Christ does the Church, because we are members of His body…. This mystery is a profound one, and I am saying that it refers to Christ and the Church… (Eph. 5:22-25, 28-30, 32). 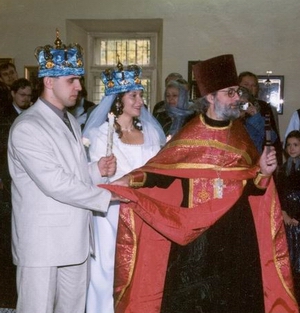 The Sacrament of Holy Matrimony consists of two parts: Betrothal and Crowning. The Betrothal is, in some way, the civil act, sanctified by the blessing of the Church. It sanctifies the intention of two persons to enter into the martial union and reflects Old Testament customs, when on those who had expressed their intentions to marry, rings were placed. This exchange of rings in the Office of Betrothal is an outward token that the two partners join in marriage of their own free will and consent, for without free consent on both sides there can be no Sacrament of Christian marriage.

The Office of Crowning also contains an Old Testament element in the crowning itself, which reflects the ancient practice of placing crowns on the heads of the betrothed. This is the outward and visible sign of the Sacrament, signifying the special grace of the Holy Spirit received by the couple. These crowns are crowns of joy and martyrdom – joy for the new union and martyrdom since every true marriage involves immeasurable self-sacrifice on both sides. 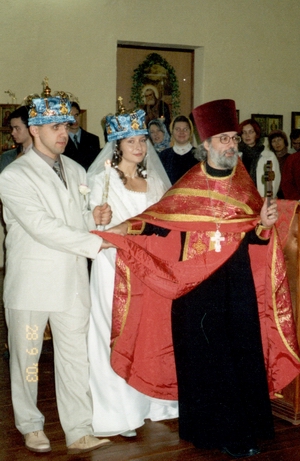 In the Greek Churches, the crowns are usually made of leaves and flowers, while in the Russian Church they are usually made of silver or gold. Customarily in the Russian Church the crowns are held over the couples’ heads by the best man and maid of honor, but in many places (as in Romania, for example) they are actually worn by the bride and groom.

The Gospel for the day contains the account of the Wedding in Cana in Galilee (John 2:1-11). The blessing, given by God to man in Paradise was renewed by Christ in the New Testament, when, at the beginning of His ministry, He performed the miracle of changing water into wine. Thus, at the end of the Marriage Service the newly-married couple drink from the same cup of wine, which recalls this miracle of Our Lord. The common cup here is also a symbol that henceforth they will share a common life with one another.

The Holy Orthodox Church does, however, permit divorce and remarriage, quoting as her authority the words of the Savior: For your hardness of heart Moses allowed you to divorce your wives, but from the beginning it was not so. And I say to you: Whoever divorces his wife, except for unchastity, and marries another, commits adultery (Matt. 19:8-9). Here Our Lord allows an exception to the indissolubility of marriage, and so, too, the Church is willing to allow an exception.

While in principle the church regards the marriage bond as lifelong and indissoluble, and condemns the breakdown of marriage as a sin and an evil, she still desires to help the sinners and to allow them a second chance. Thus, when a marriage has ceased to be a reality, the Church does not insist on the preservation of a legal fiction. Divorce, therefore, is seen as an exceptional, but necessary concession to human weakness. Yet, while helping men and women to rise again after a fall, the Church does not view a second or third union as being the same as the first and thus, in the ceremony for a second or third marriage, several joyful ceremonies are omitted and replaced by penitential prayers. Orthodox Canon Law permits a second or third marriage, but more than that is strictly forbidden.

Most viewed articles
Hallowed Be Your Name: Some Grammar and A Reflection184
Who Is the Author of Confusion and Fear?156
Church Dating 1,600 Years Back Discovered in Turkey’s Priene Ancient City141
Patriarch Kirill: Teachers of the Basics of Orthodox Culture at Schools Have a Tremendous Task135
Chapel of Life-giving Spring and St. Nectarios under construction at Bucharest Oncology Centre95
Holy Intercession Church in Glen Cove, NY, Celebrates its 70th Anniversary62
Seven-day celebrations dedicated to the Saint who helped Bucharest during plague epidemic begin on Thursday62
How to Read the Bible46
Patriarch Kirill Encourages the Media to Report Proper and Adequate Information about the Church26
Since the Start of the Pandemic Moscow Priests Have Made Over 4,000 Visits to Patients with COVID-1915
Most popular authors
Pravmir.com team238
Archpriest Michael Gillis184
Aurelian Iftimiu157
Fr. Stephen Powley156
Dilan Pamuk141
Archpriest Lawrence Farley46