God created humans as sexual persons. There is no getting around this crucial point: "Have you not read that He who made them from the beginning made them male and female, and said, 'For this reason a man shall leave his father and mother and be joined to his wife, and the two shall become one flesh?' So they are no longer two but one flesh. What therefore God has joined together, let not man put asunder." (Mt 19.3-7) God created human sexuality, and created it to be good and pleasurable, a holy institution in which each partner does not selfishly take pleasure but rather gives great pleasure reciprocally, and in that giving grows in intimate communion with the other spouse and with God Whose Icon the other spouse is.
(Reidman) Schema-Archimandrite Avraam | 01 October 2009 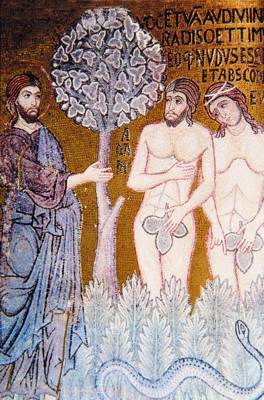 “When did marriage begin? When man sinned. Before that, there was no marriage, not in the present-day sense. It was only after the Fall, after Adam and Eve had been expelled from paradise, that Adam “knew” Eve (Gen 4.1) and thus marriage began.”

(From “Excellent Advice on Marriage”, A Sermon delivered in the Church of St. Nicholas, Trikala, Greece, 17 January, 1971 By Archimandrite Aimilianos of Simonopetra, Mount Athos)

There are some really disturbing ideas about marriage and human sexuality circulating in the Church these days. There’s this one stated above. As well, this next jewel was recently posted over on Monachos.net: “Basil in the Hexaemeron says that angels procreate by a process of simple fission, i.e., splitting apart like amoebas. God’s reason for the duality of sexes in humanity, according to Basil was that He forsaw the fall after which humans would not be able to procreate like angels, they (we) were left to procreate like animals.” Or, as one certain poster on the Orthodox-Forum Yahoogroups list wrote, “The Orthodox Fathers tend to teach that Adam and Eve were sexless. In light of these ideas we as Christians involved in the process of returning to heaven should be doing the work of being cleansed from the sexual energies which came with the Fall from Paradise.”

First of all, one important point needs to be made: While Tradition – including the opinions of any particular Father or Saint – can expand on Scripture, it can never be contrary to Scripture. Fr. John Behr, dean of St. Vladimir’s Seminary, in his article “The Ontology of Gender”, writes: “The position that sexuality is somehow secondary to our human existence, provided in foresight of the Fall and actualized in the garments of skin added after the Fall, is clearly not envisioned in Scripture. In Genesis, neither creation story associates sexual differentiation with the Fall. The only aspect which might be said to do so is the assertion that Adam knew Eve after the Fall (4:1). But is this meant to be read as an aetiological statement, suggesting that because they are now fallen, Adam “knew” Eve and begot a son? Or would it only be read in this way if one already thinks along these lines? Early Rabbinical literature had no problem in thinking of Adam and Eve as sexually active prior to the Fall.”

The strange doctrine that human sexuality is a (pre-)consequence of the Fall is problematic on many levels, and we can open up this discussion here by detailing some of these problems:

2) More fundamentally, we know that sexuality was a part of uncorrupt human nature as it was originally intended because we know Christ. As the Chalcedonian Definition teaches, He is perfect God and perfect Man. His human nature is the uncorrupt human nature of Adam, untainted by any effect of the Fall. And He is a fully human male, possessing fully human and male sexual organs, though He was ever celibate and did not use them for that purpose – a fact which entirely has to do with Who He is as the God-Man and one of the Holy Trinity rather than with any supposed fallenness of sexuality ie as God He is and always has been in an intimate relationship with the other Persons of the Trinity, a relationship which precludes human marriage. But in His uncorrupt humanity He has male sexual organs, showing that they are holy – as He is holy – and, for that matter, that female sexual organs are as well… for we know that all human embryos start out female, and only the hormones produced and released by the Y chromosome cause the embryo to develop as a male.

There is a big difference between holy sexuality – holy as a part of the human person who is the Image of God, holy as everything in our lives is called to be holy – and sexual perversion and addiction…. something which is too often and too distressingly ignored by Orthodox Christians.

Since human sexuality is an integral aspect of the physical-spiritual organism that is the human being created as the Image (Icon) of God, as such it can – and must – be an integral part of the path each human person takes as he or she grows into the Likeness of God in the process of theosis.

God created humans as sexual persons. There is no getting around this crucial point: “Have you not read that He who made them from the beginning made them male and female, and said, ‘For this reason a man shall leave his father and mother and be joined to his wife, and the two shall become one flesh?’ So they are no longer two but one flesh. What therefore God has joined together, let not man put asunder.” (Mt 19.3-7) God created human sexuality, and created it to be good and pleasurable, a holy institution in which each partner does not selfishly take pleasure but rather gives great pleasure reciprocally, and in that giving grows in intimate communion with the other spouse and with God Whose Icon the other spouse is.

Our Orthodox Faith is an incarnational Faith. We know that physical realities embody and express divine truths. Given this, we can see that God Himself has given us a very powerful sign as to the sacramental nature of human sexuality in the parallel it has with the Sacrament of the Eucharist which He has given us. Consider: in the intimate Act of Holy Communion, the Bride receives the Body of the Bridegroom into herself for continued and deeper growth in the common life of the little church and of the wider Church. (That this parallel exists is no accident – our God is not a God of accidents.)

In the same article Fr. John shows how these erroneous ideas can develop: “The typical procedure is to take statements from various works of a certain Father, or many different Fathers, and build a whole ‘Patristic Theology of Sexuality’ (or lack of it) from them. But these statements were written within the context of particular works, and we are not at liberty to remove them from their contexts, at least until we are sure that we know what they mean in that context.”

Lampert, E. (1944). The divine realm; towards a theology of the sacraments. London: Faber and Faber Ltd.