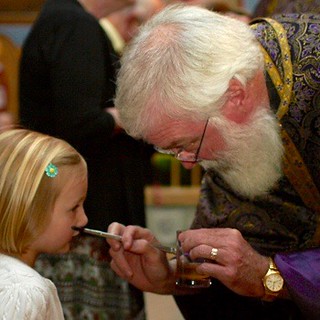 “Is any among you sick? Let him call for the elders of the Church, and let them pray over him, anointing him with oil in the name of the Lord; and the prayer of faith will save the sick man, and the Lord will raise him up; and if he has committed sins, he will be forgiven.” (James 5:14–15)

The first Scriptural reading for the service of Holy Unction shows that this Sacrament has a twofold purpose: bodily healing and the forgiveness of sins. The two are joined, for man is a unity of body and soul. There can be no sharp distinction between bodily and spiritual sicknesses. Of course, the Church does not believe that this anointing is automatically followed by recovery of health, for God’s will – and not man’s – prevails in all instances. Sometimes, the sick person is healed and recovers after receiving the Sacrament; but in other cases, he does not recover physically. Nonetheless, the Sacrament gives him the spiritual strength to prepare for death and life in the Kingdom to come.

This sacrament of the Orthodox Church is for the healing of both soul and body. It is offered on Holy Wednesday night, but it can be offered year-round.

The first portion of the service features a canon in which we sing to God, beseeching Him for his healing and protection, and for our remission of sins. Later, we sing troparia to saints including James, Demetrios and Nicholas, who are famed for healing with the power of God. 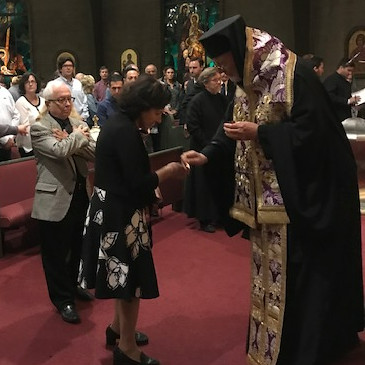 The Sacrament is formally performed by seven priests, reflecting an ancient practice of performing the service over the course of seven days, each day having its own prayers. However, it is now performed oftentimes by just one priest in one service that includes seven epistle readings, seven gospel readings and seven prayers over the oil for our repentance and anointing. We hear these in the second half of the service.

At the end, the priests hold the open Gospel Book over the heads of those receiving Holy Unction, during which the senior priest reads the Absolution Prayer: “I lay not my sinful hand upon the heads of those who approach thee in sins, and entreat of thee, through us, remission of their sins, but thy strong and mighty hand which is in this Holy Gospel which I hold upon the heads of these thy servants.” This comemmorates the ancient practice of laying-on of hands for healing.

We must note that this Sacrament is not only for those on their deathbed, but for anyone who is sick. It may also be performed over the physically healthy as well. Holy Unction does not replace the Sacrament of Penance (Confession) and, like Holy Communion, it can only be offered to Orthodox Christians. Unlike holy oil from in front of an icon or at a shrine, laypersons cannot take Holy Unction to their homes.