When we were baptized, we were baptized into Christ’s death. How often have you heard that idea? It is such a strange idea to the modern mind. Lets leave aside for a moment the adults who come for baptism. Let us, rather, call to mind all those young couples who come so gladly to the font, bringing with them their new born and for what? To have their children baptized into someone’s death!
Fr.Chrysostom MacDonnell | 23 April 2011 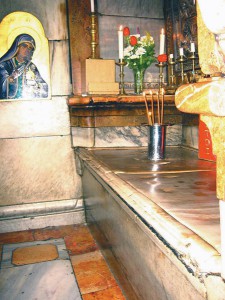 The Tomb of Christ

When we were baptized, we were baptized into Christ’s death. How often have you heard that idea? It is such a strange idea to the modern mind. Lets leave aside for a moment the adults who come for baptism. Let us, rather, call to mind all those young couples who come so gladly to the font, bringing with them their new born and for what? To have their children baptized into someone’s death! The mind recoils in horror. Surely, our modern sensibilities suspect something very strange in this idea, something primitive, even something morbid. Yet that is what happened to us when were went down into the waters. St. Paul tells us so himself: ‘Do you not know that as many of us as were baptized into Christ Jesus were baptized into his death? Therefore we were buried with Him in baptism into death, that just as Christ was raised from the dead by the glory of the Father, even so we should walk in newness of life.’ (Rom.6:3-4)

What a paradox we find here: the modern mind, the worldly, secular mind; the very mind which demands ready abortion for the unwanted; easy death for those no longer valued; perfect embryos, disposing of the surplus, that very mind, terrified of and wanting to deny that we die, hides behind its own artificial forms of life until our very humanity is abolished. Devilish work indeed! Such a mind, fixed upon hedonism, comfort and the pursuit of self gratification wants nothing to do, indeed, wants to know nothing about sacrifice and dying and self mortification.

But if we who are in Christ know anything at all, it is this: that we have entered into his death. As the expression goes: ‘been there; done that; bought the tee-shirt!’ Yes, we shall all die, if we are talking of that biological event, that breakdown of our physical form but of death itself? What of the real death beyond the separation of the soul from the body? Where is our fear? For we have died already. Mystically, spiritually, that is to say, in reality, we have already died. Our bodies went down into the water but our souls went down with Christ into Hades. That mystery, that pearl of great price is now buried within our hearts – no wonder we want that for our children as well as ourselves. But what is the point of the blessed Apostle’s assertion that we were baptized into a death? ‘So we should walk in newness of life.’ That is the point; that is our struggle. That has been the very point of this Great and Holy Week, that we become now and forever what we became at our baptism: new people!

Without this day, the Great Sabbath, the day Christ both rested in the tomb in his body whilst his soul was in Hades, proclaiming the gospel to the dead – without this day there is no such thing as baptism. The whole point of this day is that Christ has fulfilled the old Mosaic Passover. He has gone through not the Red Sea as the children of Israel but the great sea of Death. And he has done this as our pioneer, blazing the trail for us who follow him. For those who deny this, for the rest of the world, those without this faith, all they can do is walk to their inevitable end, like people with their eyes tight shut, walking towards the precipice. They are already dying but we have been reborn into Life. We are a new people: that is why we cannot live like the rest and join them on their stumbling over the edge.

If you have been at the services this week, if you have listened attentively to the readings, you might have noticed two general themes. Yes, indeed, the Resurrection, of course but also the Parousia, the Second Coming of Christ, this time in glory. The Parousia is the final intent and purpose in the mind of God whereby all things in this life will be brought to their End. This end is not the final running out of steam, a mere conclusion in the sense of being no more. Rather, end here means the very purpose and goal of the whole divine dispensation. Like the end of a race, the aim is not just to stop running but to win.

The western liturgical tradition fixes this eschatology, this mystery of the end times, during Advent, just before the Nativity. But we place it here and now. Particularly if you came to the Bridegroom Services, the Orthros of Monday, Tuesday and Wednesday on Great Week, you will have been with Christ who comes as a Bridegroom in the ancient world, coming in the night to the wedding feast and the consummation of the marriage. This intriguing mixture of Pascha with the Parousia, the Resurrection and the End, suggests that the raising of Christ from the dead is God’s final and very clear statement to mankind, his creature; his final revelation before the End. All that is left is for time to run its course in God’s good time, whilst to know the resurrection is actually to arrive at the end, that is, the very purpose of all things. We were reborn for this; we joined Christ in his death for this. This is our destiny.

Today the Church has become the cave where they laid him. Here he rests and in resting the Mosaic laws comes to its end and goal. Where of old god gave the last day of the week, the Saturday as a day of rest, Christ has now kept the perfect Sabbath rest and fulfilled the commandment. Where before, images were forbidden, now God has set before us an image, his very self in a human face; where once they were told of old, do not steal, God has come like a thief in the night and robbed Satan of his kingdom, despoiling him of souls held in bondage, harrowing hell and raising up those who had fallen. For where the Law came through Moses, grace and truth have come through Jesus Christ.

Every time we serve this communion sacrifice, we, the new Israel, his Church, manifest liturgically on earth an image of the heavenly realities. Each service holds within it, mystically, the very purpose and end of our human existence: resurrection in Christ. Isaac was the prototype, redeemed from death by a ram. Christ is the first fruits of the reality, who offered up his life-blood, just as the lambs of the old covenant were being slaughtered in the temple on the Day of Preparation. Then he rose again when the Sabbath was over; rising on the first day of the week, the Lord’s Day, the first day of the new creation. We are that new creation of his, created at our baptism. So that, where the world sees only death, we see newness of life; where the outsiders pass by a tomb, we behold the marriage chamber. So it is that the priest, preparing to offer the Anaphora and laying the sacred vessels on the Holy Table, says each time,: ‘As life-bearing, as more splendid than paradise and more radiant than any royal chamber, O Christ, is shown forth thy tomb, the fountain of our resurrection.’

It is important to remember that no one is saved by religion. Does that sound shocking? It is…

Everything we do in the Church (and by ‘in the Church’, I don’t just mean the building but…