House, M.D. and the Spiritual Power of Formula

Worship based on novelty will produce excitement and crowds, but not prayerfulness, simply because people will not be able to settle down enough to focus on prayer. One might assume that if we take away the novelties, people will become bored and end up going through the motions of “dead religion.” I am here to tell you that it simply isn’t so.
admin | 17 March 2011 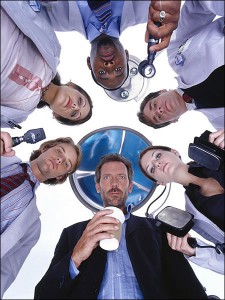 One of the ways in which my wife and I unwind in the evenings is to watch TV shows on DVD. An enduring favourite is House, M.D., a medical procedural starring Hugh Laurie as Dr. Gregory House, a misanthropic genius who leads a team of diagnosticians to detect the causes and cures of mysterious ailments.

Other than the characters themselves (and particularly House himself), what I most enjoy about the show is its ongoing formula. Each episode usually begins with a crisis that leads to someone collapsing. Following the introductory credits, House and his team take on the case and for about twenty minutes of screen time, they explore false leads and hit two or three dead end diagnoses, while grappling with various personal issues.

Then comes the moment when some offhand comment leads House to get that wide-eyed faraway look of his, mutter something cryptic, and walk out of the room without explanation. That’s how you know he’s solved the case, either happily (a curable disease) or tragically (something incurable).

And that’s the show, 42 minutes at a time, disease after disease, for seven seasons and counting. Some episodes have broken the mould, but I haven’t enjoyed them as much. House works best when it sticks to the formula.

Perhaps you have similar feelings about your own favourite TV show. Or perhaps you love to read an author whose books follow a familiar pattern. Whatever the case may be, I am sure there are some aspects of your life that follow a formula—a set routine within which you feel comfortable and happy

Formula is essential to a healthy human life. We seem to need it from the beginning. Babies need a regular bedtime ritual to learn how to sleep well by themselves. Children want the same story read to them every day for weeks at a time…

Case in point: recently, we took our children to see the most recent Narnia movie. While the older kids enjoyed it, my four-year-old was restless and even bored. When we buy The Voyage of the Dawn Treader on DVD, however, you can bet he will watch and rewatch the movie for days at a time, until he can quote it by heart.

This seems to defy logic. You might think novelty would be more engaging and exciting, whereas repetition would get dull and boring. Paradoxically, it is not so, at least for those who are experiencing life for the first time. Children seem to need time and repetition to explore a given experience more thoroughly and deeply. It needs to become a formula before they can fully understand it.

This tendency in children, who tend to be more sensitive to the multiple dimensions of life, offers a lesson for us adults. After all, isn’t novelty the constant dilemma of many churches? How many communities ask themselves how can the services, the sermon and the music be contemporized so that young people might want to keep coming to church even after Dad and Mum stop forcing them?

The problem, as is almost always the case, lies with the assumptions underlying the question. Those seeking relevancy assume that if you give people something new to experience on regular basis, their interest will be captured and held. Then the only problem is how to keep it fresh, week by week.

Louder music, flags and banners, song-and-dance routines, slick videos, Holy Spirit pyrotechnics, cutesy kiddy set pieces, media stunts—these innovations are often just attempts to attract attention through novelty. And as time goes on, communities must play for this gamble with ever higher stakes, as their church attendance becomes dependent on the innovativeness of this Sunday’s episode…

What is lost in this cycle? Depth. A friend of mine recently shared that he cannot pray in a church until he has learned what is coming next in the service. Why? Because full engagement requires sustained attention, and sustained attention requires that a person not be on-guard, jittery or anxious, as we often are when placed in novel situations. Worship based on novelty will produce excitement and crowds, but not prayerfulness, simply because people will not be able to settle down enough to focus on prayer.

One might assume that if we take away the novelties, people will become bored and end up going through the motions of “dead religion.” I am here to tell you that it simply isn’t so. In the worship of my own church community (which is about as far from novelty as you can get), I have seen children, youth and adult get more engaged the longer they attend, not less. As their familiarity with the service increases, they understand more and are able to participate more in the ways available to them. They know what’s coming next, so they can easily find a way to enter into what’s happening.

For millennia, human beings have needed formula. It’s the secret of our most enduring art; it lies at the root of our psychology; it forms the basis of our worship. After all, if we have always been human, God has always been God. As the Apostle writing to the Hebrews says, “Jesus Christ is the same, yesterday, today and forever.” If we haven’t changed and God hasn’t changed, is there really a better formula to meeting Him than the one used since the beginning by those who have come before us?