How Ingratitude Became a Virtue 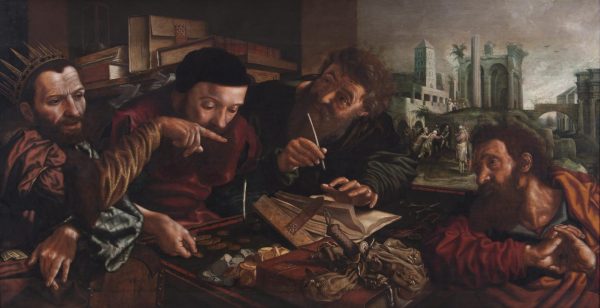 Immanuel Kant once wrote: “Ingratitude is the essence of vileness.” And while I think that this is doubtless true in the modern sense of the word “vileness,” for the purpose of this article I would like to consider the archaic meaning: it comes from the Latin vilis, which means “worthless.” Kant is saying that there is nothing more worthless to human beings than ingratitude.

“Not so!” argues a recent article in The Atlantic, entitled: “Mothers Shouldn’t Be Grateful for Their Husbands’ Help.” The bulk of the article consists of an amalgamation of anecdotes and statistics marshaled in order to prove that women are not only being taken advantage of by their husbands in “the distribution of child-care labor in their home,” but that they have even been somehow duped into being grateful for it. The gratitude of women toward their husbands is declared to be “an impediment to the elusive goal of equity in the home.” Ingratitude, says the author, is not vile and worthless, but rather useful and even virtuous.

This article is exemplary of many of the chief dogmas of modernity (which, I suppose, is hardly surprising given that it ran just above one entitled “Abolish the Priesthood“). The most obvious of these dogmas is a radical egalitarianism, in which equality is more or less defined as complete and total interchangeability. The article clearly assumes that equality between the genders demands a precise 50-50 split in all childcare duties. It thereby also implicitly assumes that caring for children is something inherently undesirable: after all, nobody is filled with “righteous anger” because they get to do more of something which they themselves desire to do!

Let me be clear: I am certainly not trying to pretend that caring for children is not difficult or taxing at times; indeed, to speak thus as a monastic would be both naive and hypocritical. But it must also be admitted that almost any sort of professional work is also likewise difficult and taxing at times. So the question is this: why is professional work regarded as inherently more desirable than domestic work? Why should women actively cultivate ingratitude in the hopes that they will get to do more of the former and less of the latter? Why is it that women supposedly ought to find more fulfillment in pursuing a career than in raising children?

We find an important clue in this statement from the article:

In 2017, the Organization for Economic Cooperation and Development called the uneven distribution of unpaid labor between men and women in the home one of the most important gender-equality issues of our time.

Here it is, unmistakably: “the uneven distribution of unpaid labor.” To put it plainly, caring for children is less desirable work because it doesn’t come with a paycheck. This reveals another of the hidden dogmas of modernity: career advancement and material success are sine quibus non of a happy and fulfilled life — for both men and for women, both of whom are now reduced to interchangeable and, moreover, intrinsically economic units. The cult of the market is one of the most powerful forces of the modern age.

I have written on this subject before, in the context of the modern system of public education:

Is it any wonder that there was a mass exodus of women leaving their homes for the workplace just after their five-year-old children began leaving their homes for government schools? And here’s a question that nobody’s asking: who exactly is it that benefits from such an arrangement? Mothers and their children, or Wall Street and the GDP? Because according to the actual data, less than half of American women describe themselves as happy in their jobs. Meanwhile, an absolutely overwhelming 84% of working mothers say that they wish they could be full-time mothers, but can’t afford to. Somehow it seems that “empowerment” and “liberation” have turned out to actually mean “indentured servitude” and “wage slavery.”

But there is another cult even more powerful than the cult of the market: the cult of the goddess called Progress. And more than anything else, it is this dogma which undergirds the article in question: the March of History must on no account be stopped. If gratitude stands in the way of Progress, then gratitude must be a sin, and ingratitude must therefore be a virtue. The author concludes her article:

Gratitude is a brand of benevolent sexism, a force that repels change…. Only once gratitude is relinquished for righteous anger will gender rules in this realm be rewritten. Then we can land somewhere different: not grateful, only glad.

And if such a world can only be brought about by destroying gratitude and embracing anger, then that is a small price to pay for our imminent earthly paradise. Indeed, why after all should I feel grateful for anything to anyone? I am only claiming, at long last, that which is rightfully mine.

Let us Christians not underestimate the power and appeal of such a vision. Nor let us imagine that it is straightforwardly wicked and wrong. Rather, let us consider again — in a slightly different light — these qualities of modernity: the desire for all to be well-treated, the refusal to countenance injustice, the search for a life of fulfillment, the longing for a better world. These qualities are not sinful; on the contrary, they are Christian. So what is the problem?

The problem is that these desires are no longer entrusted to Christ, but rather to our own power and planning. These desires are no longer directed toward the Kingdom of Heaven, but rather toward this fallen and swiftly passing world. Instead of returning to Paradise, we are trying once again to build Babel. Instead of searching for Sion, we are making ourselves at home in Babylon.

And this is the essence of the spirit of Antichristianity, as Fr. Seraphim (Rose) once wrote: “The Antichrist is the fake Christ who promises to give outwardly and obviously what Christ brought inwardly and hidden.”

And in the end, the promises of Antichristianity cannot really be kept. The vision shown to us by the goddess Progress has much appeal, but precious little actual beauty. The world she seeks to bring about may be “fair,” but it is also sterile, empty, and ugly. After all, what gladness can there really be apart from gratitude? What joy can there really be without sacrifice?

And that is the great truth the article fails to acknowledge: that “greater love hath no man than this, that a man lay down his life for his friends,” that “through the Cross joy has come to all the world.” There is no real joy to be had in a world where there is nothing left except one’s own fair share — and I think that the author would soon realize this herself, if once her goals were actually achieved. There is a certain freedom in such a world, perhaps, but freedom merely to be an interchangeable cog in an economic machine, freedom to be (like spoiled children) angry at those we love until all our demands are met. Freedom, in the words of one modern writer:

to be lords of our own tiny skull-sized kingdoms, alone at the center of all creation. This kind of freedom has much to recommend it. But of course there are all different kinds of freedom, and the kind that is most precious you will not hear much talked about in the great outside world of winning and achieving and displaying. The really important kind of freedom involves attention, and awareness, and discipline, and effort, and being able truly to care about other people and to sacrifice for them, over and over, in myriad petty little ways, every day. That is real freedom. The alternative is unconsciousness, the default-setting, the “rat race”–the constant gnawing sense of having had and lost some infinite thing.

To bring it back to the topic of children, I will quote another passage from the same article I previously wrote concerning education:

To raise godly children is the highest joy, the most beautiful gift, and the most solemn responsibility of any parent, whether man or woman. And the widespread idea that fulfillment and purpose in life come primarily (or even secondarily) from a career, and that the absence of a career is a result of oppression and marginalization, is nothing but a glaring indicator of the vapidity and spiritual poverty of the modern age.

Kant was right: ingratitude is indeed the essence of vileness. It is cheap, and it is worthless, and it will do nothing except rob us of the great and profound joy which God desires to give to all of His sons and daughters. “It is more blessed to give than to receive.” “Whoever wants to save their life will lose it.” For even “the Son of Man came not to be served, but to serve, and to give his life as a ransom for many.”

Let us therefore say with St. Paul his beautiful words, and strive with all our might to carry them out in our lives: “I seek not yours, but you.”