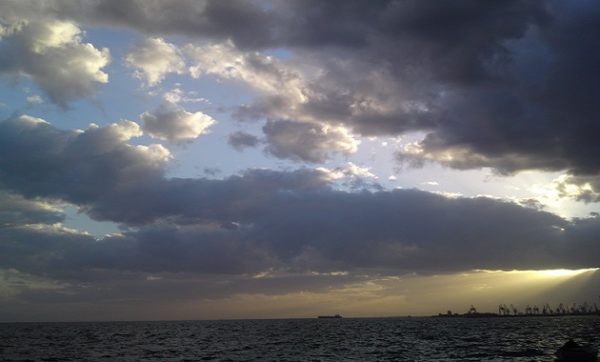 Indeed we are presently facing some tough times which affect everyone. It seems that we are all aboard a ship- the ship is our small country- sailing in rough seas without knowing where we are or where we are heading to. Whenever certain hardships afflict a country, a family, a society they are real and painful. One does not offer consolation, however, by saying that nothing is happening. The correct way is to recognize that we are facing certain hardships and to look for ways to deal with them.

When a country or a person faces hardship and is troubled and suffers, is worried and faces dire consequences, this does not mean that everything was caused by God, because God does not wish to make people suffer, neither does He cooperate with the tribulation which is afflicting us. Hardship, anxiety and suffering never originate from God but are either caused by the devil or by our own actions.

Nevertheless, no matter where these come from, the main task is to try to deal with the situation wisely and use it to advance spiritually, by converting the hardship into a blessing and the deep darkness into the true light. No one is exempt from hardship, neither sinners nor holy men, nor rich or poor; everybody is bound to taste the bitterness of tribulation at some point.

The issue here is not how to avoid hardship but how to deal with it. When Paul the Apostle was speaking to those in mourning he was not telling them that “the Lord will absolve you from sorrow and death” but “you may not grieve as others do who have no hope” ( A Thess. 4, 13). In other words, he was telling them that they will certainly feel sorrow and that a sword will pierce their hearts (because of the death of their loved ones), but was cautioning them not to become like the others who have no hope. You, the children of the Church, must deal with this hardship and sail through it by placing your only hope on Lord Jesus Christ. There is no one else on whom we should place our hopes. As Dionysios Solomos was saying “it is not easy to open the gates, when necessity bashes on them”.

Of course one may view the current situation in a different light since it may teach us many lessons. Namely, that we are also responsible for the hardships we are currently facing because we have abandoned the proper way of thinking and felt secure in insecure things, in matters which are wrong and shaky. These hardships will also cause some good in the long run. Yet it is true that the first blow causes bitterness and pain.

What can we do now? First and foremost we ought to have faith that the Lord is the One Who governs everything while all those who think that they rule the world have no power. Even the devil when he tempted Christ and showed Him all the world’s wealth and promised to hand it over to Him if He worshiped him, Jesus said: “Get thee behind me Satan: for it is written, Thou shalt worship the Lord thy God, and him only shalt thou serve” ( Mathew 4, 10). There are people who think that they can succeed in everything through their own  effort alone. Of course if you are in a post of responsibility you ought to do everything humanly possible in order to bring about the best possible outcome. But above all you ought to recognize that He Who governs the world and He who will eventually concede or not to whatever happens to the world is the Lord and not any human being. Evil people may set up schemes; the devil and his followers may cause troulbe to people, to whole families, to entire societies, countries and to the whole world; yet, they have no power against their victim unless the Lord permits it.

When Christ would not answer to Pilate during his questioning, the latter said to Him: “You will not speak to me? Do you not know that I have authority to release you and authority to crucify you?”(John 19, 10) And Jesus answered: “You would have no authority over me at all unless it had been given you from above” (John 19, 11). In other words “you would have no authority over me, if God hadn’t given you permission to go ahead with what you are about to do”.

Therefore, we ought to acquire a deep and unwavering faith that nothing more and nothing less will happen than what God permits. We also ought to recognize that we are also responsible for these hardships; we are suffering because we had been injudicious and thoughtless and had made bad judgments.

Nevertheless, we do need to ask the Lord to come to our rescue by sending us His divine providence.  How are we going to do this? When a person stands before the Lord in deep repentance, recognizing his bad behavior and his evil ways and that he was living a frivolous and godless life, and repents and laments, then he will attract the Lord’s providence. All the tribulations take place not only because some people so wished, scheming against us, incited by the devil, but also because we have pushed away the Lord’s providence through our sins and our stupidity. It is known that the further away one steps from the Lord the nearer he comes to the enemy of our salvation and all the more hardships and storms befall on him since he remains without protection in the face of whatever comes before him throughout his life.

In the Old Testament, all the prophets and God’s messengers were asserting that sin was the cause of every hardship. They were also warning that tribulations would befall on the people unless they repented and changed their ways. Yet people took no notice; they were living as they wanted and even were persecuting, rejecting and ridiculing the prophets, asking them not to bother them with worrisome things. When hardships did befell on them, the prophets were also suffering along with the people; that’s why they are regarded as great saints in the face of the Lord since they were suffering along with the people and were in the receiving end of all the consequences of the peoples’ imprudence. At the same time they were also trying to support them and lead them onto the path of salvation.

What did such prophets suggest? Certainly they were not suggesting worldly solutions and outlets. They were advocating repentance, return to the Lord and changing of peoples’ ways and thoughts; they were calling for repentance and return to the bosom of Lord the Father in order to attract His providence; then the situation would gradually improve. What we need is not to go back to what we had before; if this happens and we do not change our ways, nothing good will come out of the whole situation. The aim is not just to survive through a financial and global crisis but to change our way of thinking, our minds- i.e. to repent. Whoever manages this, it means that he has done some proper work on himself and has transformed the present hardship into a spiritual struggle. Unless this happens, we will forget everything and return to our ways when things get better.

The Peace of God is a Great Treasure

Often when we go to sad events, we all say, with the best will in the world- and…

The Fear of God is Reverence for and Love of Him

If I love God, I’m careful not to lose that love. And the more I love Him, the…