How to Live an Ecological Life in Christ

Aware or not, our acts greatly influence the people around us. Take a priest: if he does not behave properly in the parish, will his parishioner be willing to advance on the path to Christ he only preaches but does not follow? Take a parent: would a child listen to come home early while his parents party all night every weekend? Take a manager: would everyone perform to their best abilities under his command if he has bad work ethics?
Fr. Vasile Tudora | 04 February 2010 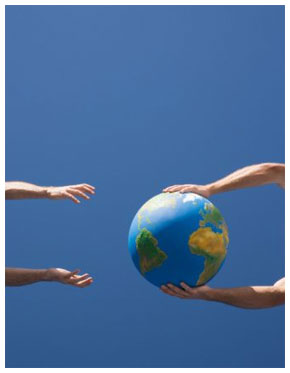 Raising awareness of our spiritual footprint.

There is a lot of talk these days about the environment and the impact our civilization will have on the planet for generations to come. A lot of damage has already been done and we are here now desperately trying to clean up the mess and stop the damage go further. The more we come aware about his problem the more we become aware of the footprint we leave behind us as we live in the world.

The concept of “carbon footprint” has been around for a while and is a measure of the impact our activities have on the environment, and in particular climate change. For spiritual purposes, if we borrow this ecological model and take it through the filter of biblical theology we arrive at another idea that can help us understand more the relationships between ourselves and the society at large: as every one of us leaves behind a carbon footprint in the same way we also leave a spiritual footprint that can greatly impact the spiritual “climate” we live in.

The basis for the understanding of the spiritual footprint is a verse from the Gospel of Luke.”It is impossible but that offences will come: but woe unto him, through whom they come! “(Luk 17:1). This King James Version does no justice to the passage because the translation of the Greek original word skandalon as offence does not capture the whole meaning of the word and its connotations. The word skandalon would rather correspond to the modern English word scandal, or as the Thayer’s Bible Dictionary suggests “occasion for stumbling”.

We can now read the passage again:” It is impossible but that occasions for stumbling will come, but woe unto him, through whom they come! “(Luk 17:1). In other words the world is full of temptations and opportunities to sin, but beware that you are not the one that leads people into temptation. This is a very “green” concept: don’t leave behind anything that may be “toxic” to other people.

The scripture takes these things very seriously as we continue to read the next verse: “It would be better for you if a millstone were hung around your neck and you were thrown into the sea than for you to cause one of these little ones to stumble.” (Luk 17:2). You wanted regulations of carbon emissions, here you have it: only the hardest punishments for the offender! Although this biblical verdict may sound extreme into some ears, its harshness raises rapid awareness on the influence our behavior, and especially our sins, has on others.

Any Father Confessor, when confronted with a particular sin will always ask: what happened, when it happened, how many times it happened and were you alone or with others when it happened. The reason of this inquiry is to gauge precisely the “spiritual footprint” of our sins.

A story from tradition story may help in the understanding of the concept. It is said that the Tsar Peter the Great once went for confession to an old bishop. He confessed his sins and he was about to leave when the bishop stopped him saying: “So far I’ve heard the sins and shortcomings of Peter the servant of God, but I haven’t heard anything about the sins of Peter, the Great Tsar of Russia” Amazed Peter asked “What do you mean? I am Peter the Tsar!” The old man replied: “You are, but you haven’t told me anything about the wars you fought to conquer other countries, about the raised taxes that led people into starvation, about the people you wrongfully convicted to death and many others things that a ruler does that affect not just himself, but the people of his country”

Aware or not, our acts greatly influence the people around us. Take a priest: if he does not behave properly in the parish, will his parishioner be willing to advance on the path to Christ he only preaches but does not follow? Take a parent: would a child listen to come home early while his parents party all night every weekend? Take a manager: would everyone perform to their best abilities under his command if he has bad work ethics?

Our acts reshape the spiritual environment around us. Not everything is only between us and God, in reality it is between us, God and everybody else. The more sin we have in a society, the more its members will be prone to sin. Everybody’s sin is nobody’s sin said once Alfred Kinsey hinting undoubtedly to the down-spiraling morality of his contemporary society. And the history proved him right: things considered grave sins a hundred years ago, are barely noticed today. The larger is the “sin-print” the greater the negative impact on the civilization.

But reducing our negative spiritual footprint is not only about the others. After all, the first person who will be poisoned by my toxic emissions is me. Tending to the spiritual needs of our souls, trying to better ourselves every day, taking up the Cross that Christ first assumed for us all, are the first and necessary steps toward an ecological existence in Him. The cleaner we live, both spiritually and physically, the cleaner the world around us will tend to be. There is no way around this.

There is however more to be done in a constructive way. As we can negatively impact the world around us, so we can influence it in a positive manner. As Christians all of us are “a chosen generation, a royal priesthood, a holy nation” we all can “speak of the praises of Him who has called us out of darkness into His marvelous light”(1Pe 2:9) This does not mean that everyone should be a priest to positively influence the people around, but every Christian is called to martyria, to be a witness for the glory of God with their lives. The life of any Christian should be “an example of the believers, in word, in conduct, in love, in spirit, in faith, in purity.” (1Ti 4:12). A good life, a life according to Christ and His Gospel of love is the best sermon one can ever preach.

We are to live our faith in the works, following the example of Christ because “faith without works is dead” (Jas 2:20). Our faith rubs on the people around us when we fulfill the commandment that contains all the others ones: “love one another as I have loved you.” (Joh 15:12). The love that God has freely given us returns to Him through our brothers and sister when we love them unconditionally, when we respect them and cherish them as we do with Christ. In every sinner, unbeliever, bad colleague and so on there still is the icon of Christ, buried, like in a tomb, under layers of indifference, sin, laziness, decadence. It waits to be awakened and brought to the light. We can be the ones that awake Christ in our brothers, the ones leading the way today as He has already done it for us.

Christ came in a world that was suffocating under the toxicity of sin. He cleaned it with His sacrifice on the Cross and neutralized the poison of death with His Sacred Blood. He gave us a new beginning and adorned the world with a sparkling white baptismal robe. It remains up to us now to decide what kind of footprints we will leave on it, both individually and as a community. We’re in it together and together we should try to keep our spiritual world green and far from sin starting with ourselves, one soul at a time.