It is very painful to overcome oneself. I turned away from God on that day. I regret it so much now and every day I beg Him to forgive me. If He decides to cast me into hell, my last wish will be to see the one I have killed, to see it in God’s embracement and to ask for forgiveness for the last time.
admin | 29 January 2009

It happened by chance.

We have been dating for 3 years already. We haven’t practiced safe sex for a long time. Everything ran smoothly somehow and we got used to it. And finally my girlfriend became pregnant on March 10. We didn’t know what to do. We kept up courage and planned our future life. She had to finish her post-secondary education and become a part-time student at the University. I had to study 2 more years to graduate.

I wanted to talk about it with my parents but she was afraid. I said nothing because I didn’t want to scare them. We were worried. I didn’t get a wink of sleep all night and was thinking it over…

I wish I could listen to my heart rather than to my mind. I visited my friend and told him about my concern. He told me that everything would turn out well and it happened just because of the late periods. I tried to believe it. I broke down and called her. I began to beg her not to break our lives and get an abortion since I wanted to finish my studies and go abroad with her. She didn’t want it. I began to “teach” her. The pregnancy tests were still positive. We had an ultrasound done but it showed nothing as it was too early (second week). We had it done a second time. We had a little shock, but we made a “right” decision. 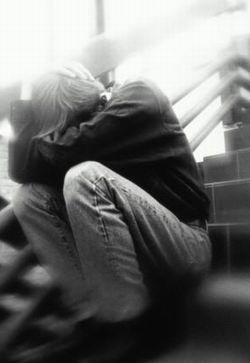 I found money for the abortion (borrowed from that friend). She consented to it. We were sorry to kill it, but I avoided these thoughts believing that everything is good in its season. I fell asleep. She had to get an abortion in the morning. I called her on her cell-phone. She told me that still nothing had been done.

Something touched me inside, but I decided to stand firm to the end.

Some days before that I had been praying to God telling Him that we would receive His Gift as soon as we were ready. I prayed to take mercy on her and told Him that I take this sin upon myself.

THE ABORTION WAS DONE!

I came to take her from the hospital, she was recovering from anesthesia. I accompanied her home and comforted her. I felt down somehow.

Two months and a half passed already. She seems not to have understood it yet. She enjoys her life and tells us that we’ve done right and we’ll have a child in the proper time. She doesn’t understand me. I began to go to church. I often feel apathy and break into tears. I tell her that we need to repent of this sin, but she won’t listen to me. I confess I regret it.

I told my parents about it and they understood and supported me. They told me that we needed to plan everything and that “no one will punish you for it nor can any one avoid it”!

But I know that they don’t believe in God.

I suddenly understood Him as I had never understood before. I realized that He gave us that child not to punish us, but to make us happy. And I didn’t take advantage of the last chance when the operation was delayed. I’ve lost everything. I am broken and I know that I will never be able to forget it.

It is very painful to overcome oneself. I turned away from God on that day. I regret it so much now and every day I beg Him to forgive me. If He decides to cast me into hell, my last wish will be to see the one I have killed, to see it in God’s embracement and to ask for forgiveness for the last time.

Men also cry. I thought it was not about me. I’ve realized now that hell begins here on earth.

“Abandon hope all ye who enter here”- it concerns everyone who ventured on abortion.

I would like to ASK EVERYONE who reads this article to TAKE A RIGHT DECISION in your life. The right decision is LIFE AND ONLY LIFE.

You don’t need to be afraid of anything. Fear, anger, envy lead us to the dark side of the force. It was told by one of the movie starts in Star Wars. And he is right, right…I am sorry, but I turned out to be a coward and it is very painful. I try to believe in the best. Sometimes it comes to ridiculous things and it seems that I’m going crazy.

Remember, that the time machine hasn’t been invented yet and there is no return.

Translated from Russian by Alla Reutova

Most viewed articles
First Church in the Antiochian Archdiocese Named for St. Xenia of St. Petersburg Prepares for Feast Day259
Patriarch Kirill: Not Only People, But Churches Too, Can Depart from God208
A Christianity of the Catacombs166
Thoughts on Theophany and Revelation98
Patriarch Porfirije of the Serbia: Our Position on the Church Issue in Ukraine Has Not Changed85
Archbishop Makarios of Australia: ” the Great privilege of the Orthodox Church is that we live in communion”63
The Truth About Riches58
Metropolitan Onuphry Speaks on How to Protect One’s Soul From Sin20
How to live the Spiritual Life (Part I)1
Most popular authors
Pravmir.com team635
Archpriest Lawrence Farley166
Elissa Bjeletich98
Fr. Gabriel Bilas58