“I Was Going to Prove There Is No God to the Priest, But Suddenly I Said Something Completely Different” – True Story 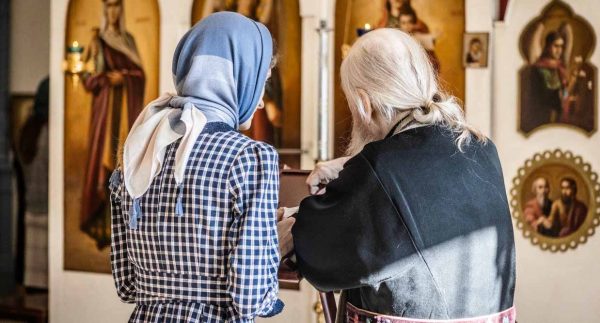 Once I saw a popular film about the exposure of religion and realized that its authors literally read my mind: there is no God, and the Bible is only an allegorical description of the movement of stars! I was so impressed that I even learned the phrases from this film by heart! I showed it to so many people back then, I assured them they were mistaken about their faith…

At the time, my sister Tanya attended the Church of Sofia, the Wisdom of God, in Moscow for a year and a half. I lived in another city, we hardly talked. But then the situation changed, and I also moved to Moscow.

Once I had to urgently meet with Tanya, and she was at the evening service. So for the first time I ended up in a temple.

It was a weekday, there were very few people. I remember how I liked the men’s choir, and I even decided to come to the service next Sunday to listen to it again. Tanya endlessly talked about her spiritual father, but it was all so uninteresting to me! I liked only the singing: as if I went to a concert.

The following Sunday, my sister was going to the house church of the Ostankino television center and called me to come with her. I willingly agreed, but not because I wanted to attend the service, but because I was interested in visiting Ostankino.

In order not to provoke the parishioners, I pretended to pray: everyone was crossing themselves and bowed, and I did the same. However, in my head I saw the film, the quotes, the protest! And then a thought came to my mind: “I should ask the priest questions! Let’s see what he’ll say to me! ”

All week until the next Saturday I pictured in my head the upcoming conversation and inwardly I triumphed. I feigned innocence with my sister: I told her I had questions for the priest, which I could not tell her! She was only too glad.

Then came Saturday, the All-night Vigil. People lined up for confession at the church. However, 20 minutes passed from the beginning of the service, and I had intense fright, I don’t know why. While I was leaving the church about to go home, suddenly I saw … Ivan Okhlobystin! I instantly turned back: I was fascinated, it was the star of the screen after all! And I went back to the church again.

During the service, I only listened to the choir again. Naturally, I didn’t understand the words, far from it [the hymns are sung in Church Slavonic -Tr]. Tanya and I were the last in a huge line for confession. Finally, it was time for me to go to the priest, and I had the most “undeniable” arguments and counterarguments in my head.

But as soon as I came closer to him, something unimaginable happened. Neither in my head, nor in my heart, nor anywhere in me I had the words that I suddenly uttered. It’s hard to believe, but my mouth opened and I said: “I do not believe, but I really want to, help me!”

I cannot convey in words what I experienced at that moment! But I remember the look in the priest’s eyes, who in a split second understood what he had witnessed.

The priest asked me if I was in a hurry then, and offered to stay and attend his catechetical conversation with future godparents. They had been waiting for him for a long time, and it was, in fact, already about 11 pm!

I agreed. We sat in a circle, and Father Igor began to tell us about the Lord. The priest made different comparisons, very easy and understandable. One such comparison shot right in my heart: God shines on everyone the same way, but some people just have dirty windows and the light doesn’t get through and they don’t see Him!

Now I remember all this and understand: God Himself came to me back then, He looked into my dirty window. And I am glad that my enthusiastic anti-religious agitation did not shake anyone’s faith.

Later, I found out that there was another person in our parish who was “infected” with the same film. He even wrote arguments and quotes on a piece of paper! And, coming up to another priest, he wanted to say something, but the priest got ahead of him, he began to ask questions. After 10 minutes, this man caught himself confessing his sins, and that he was tearing the piece of paper with the “arguments” behind his back…

Most viewed articles
First Church in the Antiochian Archdiocese Named for St. Xenia of St. Petersburg Prepares for Feast Day288
Patriarch Kirill: Not Only People, But Churches Too, Can Depart from God176
My World’s Different105
A Christianity of the Catacombs95
Patriarch Porfirije of the Serbia: Our Position on the Church Issue in Ukraine Has Not Changed89
Thoughts on Theophany and Revelation80
Archbishop Makarios of Australia: ” the Great privilege of the Orthodox Church is that we live in communion”34
1
Most popular authors
Pravmir.com team587
Protopresbyter Themistoklis Mourtzanos105
Archpriest Lawrence Farley95
Elissa Bjeletich80