If We Mock the Sacred We Will Have No Future

We are all now going through Great Lent. The devil has mocked us all, introducing so many afflictions during these days during which we should be removing ourselves from the agitation of this world by immersing ourselves in prayer, restraining ourselves by fasting, and repenting of our own sins. But perhaps the Lord is leading us through these trials during the holy days of Great Lent so that we would all recognize our responsibility for our land, for Holy Russia, and for the Orthodox faith.
Patriarch Kirill of Moscow and All Russia | 27 March 2012

On March 24, 2012, the Saturday of the fourth week of Great Lent, His Holiness, Patriarch Kirill of Moscow and All Russia, celebrated the Divine Liturgy of St. John Chrysostom in the Church of the Deposition of the Precious Robe of the Lord in Moscow.

In his remarks following the Divine Liturgy, the Primate of the Russian Church touched upon the recent blasphemous action that took place in the Church of Christ the Savior, which has preserved a portion of the Lord’s Robe since 2007. 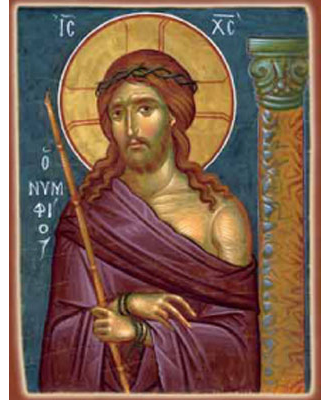 I think you all know about what recently transpired in the Church of Christ the Savior. Let us draw a correlation between our thoughts and the fact that on the place where we are standing our pious ancestors, who laid the foundation for the flourishing of Russia as a great state, established this church solely in order to meet this sacred object. And their distant descendents in the twenty-first century have desecrated this sacred object located in the Church of Christ the Savior…

But what, seemingly, should be the case? The times have passed when people resolved these questions by force – and glory to God, that they are gone. But what should have been the case in our land, which owes its very existence in many ways to the Orthodox Church and the Orthodox faith, which roused our nation to its greatest feats, including the defense of the Fatherland in 1812? Indeed, it was in the name of this victory that the Church of Christ the Savior was built. No, people have appeared who justify this blasphemy, minimizing it, attempting to portray it as some sort of funny joke. And sadly – and my heart breaks from bitterness – among these people are those who call themselves Orthodox.

Let us draw a connection between the Church of the Deposition of the Robe here, on the Don, the events of the seventeenth century, and to what transpired in the twenty-first century in the presence of the great sacred object of our Church and of the entire Orthodox world – before the portion of the Lord’s Robe. I think no believing person should say: “this does not concern me” or “this is none of my business.” This cannot but wound every Orthodox Christian. Therefore I call upon you all to intensify your prayers for our country and for our nation. For we will have no future if we begin to mock our sacred objects and if this mockery strikes anyone as some sort of act of valor, as some sort of expression of political protest, or as some kind of appropriate action or harmless joke.