We finally arrived in the small town of Kayanga located in the district of Karagwe in the northwestern tip of Tanzania, which was to be our temporary home. Karagwe is near the scenic southwestern shore of Lake Victoria. Our task was twofold: first, to teach courses on Orthodox faith and theology to one hundred students of various ages at a special seminar organized by the local Metropolitan, Jeronymos of Mwanza; and secondly, to be 'eambassadors of good will' to the people of Tanzania as we travelled with the Metropolitan to various communities throughout his diocese.
| 10 May 2010 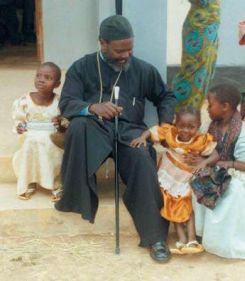 After months of fundraising and anxious preparation, my son Michael and I finally embarked on our very first mission trip. On July 27th we departed for the remote regions of Tanzania in East Africa. This trip proved to be the most exciting and exhilarating journey I have ever been on, yet at the same time the most exhausting.

Our mission commenced on the shores of Florida’s eastern Atlantic coast in the historic city of St. Augustine. We were warmly welcomed by the dedicated staff of the Orthodox Christian Mission Center who provided us with our final orientation. Joining us in St. Augustine were our team leader Fr. Michael Miklos and Briana Finui, both of the American Carpatho-Russian Diocese. The four of us comprised the American side of our mission team. We met the other half – four members of the Church of Finland – in Amsterdam. Our international team was co-sponsored by SCOBA (Standing Conference of the Canonical Orthodox Bishops in the Americas) and the Orthodox Church of Finland. Ours was the first OCMC mission team equally composed of four members from two different countries.

As soon as we touched down in Uganda, we knew we had entered another world. The main roads were lined with endless vendors selling various goods from small wooden shacks. Women wore colorful tongas with small babies strapped across their backs, yet somehow managing to balance tall round baskets on top of their heads, amid a noisy and never-ending stream of pedestrians, bicycles and speeding automobiles.

We finally arrived in the small town of Kayanga located in the district of Karagwe in the northwestern tip of Tanzania, which was to be our temporary home. Karagwe is near the scenic southwestern shore of Lake Victoria. Our task was twofold: first, to teach courses on Orthodox faith and theology to one hundred students of various ages at a special seminar organized by the local Metropolitan, Jeronymos of Mwanza; and secondly, to be ‘eambassadors of good will’ to the people of Tanzania as we travelled with the Metropolitan to various communities throughout his diocese.

Under the inspired leadership of Metropolitan Jeronymos, this particular region of Tanzania is experiencing an incredible thirty percent annual growth rate, with a new seminary, churches, clinics and schools. Metropolitan Jeronymos was born in Uganda and educated in Athens and is fluent in both Greek and English. It was a great honor to work with this man and his devoted staff in such a unique and blessed ministry.

Our teaching mission was only one segment of the longer seminars organized by the Metropolitan, where he gathers selected young people, and future leaders and teachers from various villages of his diocese. Nurses, educators, tradesmen and other professionals are invited to provide workshops on agriculture, construction, economics, health and hygiene. The students return home and pass their newly acquired knowledge and skills to their fellow villagers, improving the overall quality of life in their village.

The poverty we encountered was incredible. Tanzania is one of the poorest places on earth. Many homes in the rural areas are constructed out of mud-bricks and bamboo sticks. The average life expectancy for Tanzanians is only around fifty years. Many suffer from malaria and yellow fever, and in many areas there is no clean water or adequate sanitation.

Despite such extreme poverty, the people were still so joyful and dignified. Most memorable were the smiling faces and joyful voices of the young children who would often flock around us wherever we went, with wide smiles spread across their eager- eyed faces shouting ‘Mzungu!’, ‘Mzungu!’, which means ‘White-man’ in Swahili.

We taught our classes in English, with the help of a translator. It was strange at first, speaking only in short, concise phrases, and then having to wait for each phrase to be translated into Swahili. Somehow it worked out better than expected. It was a joy to see the positive responses and genuine interest reflected in the eyes of our students.

Among our most cherished memories were the opportunities to personally accompany His Eminence Metropolitan Jeronymos on his long journeys through the remote regions of his diocese. It was a moving experience to travel with him as he visited communities and schools and consecrated new churches. This year alone the Metropolitan is scheduled to consecrate thirty new churches! We were warmly received into all the parish communities we visited. The joyous receptions with which they honored us after Liturgy, as they ‘brought out the drums’ and danced for us, will remain with me forever.

Celebrating the Liturgy in Swahili amid the loud and harmonious congregational singing was an experience of a life-time. Many of the faithful knew the Liturgy by heart, and the delight they shared as they sang praises to the Lord was felt by all. 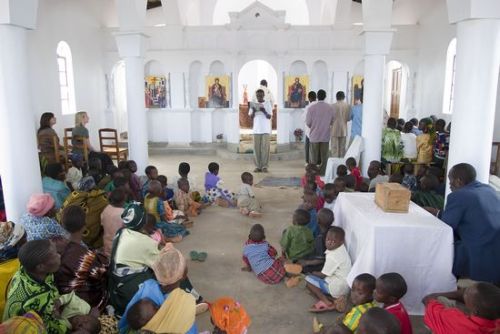 Metropolitan Jeronymos has a very elegant, even regal way about him as he serves the Divine Liturgy. Dressed in his hierarchical vestments, he was always clothed in truly Christ-like love and humility. Watching him interact as an arch-pastor among his young priests and witnessing the loving, pastoral relationship he has with the people of his distant communities – even dancing with them to the beat of their African drums after Liturgy – is to see a genuine missionary at work; a missionary man in the truest sense of the word; a man specially ‘sent out’ by God. One of the most encouraging aspects of the mission was to see how the Lord used us to reach out and touch the hearts of these young African believers, even through the means of a translator. In a quiet yet sincere way, I could sense an inner connection with the students through the attentive yet endearing looks in their eyes. Somehow, by God’s grace, we pray that the spiritual seeds planted in the souls of those young believers will continue to grow and blossom forth.

Another great lesson learned from the success of our team was the importance of being patient with one another, and how vital it is not to impose our own will on those around us. Our teaching team, despite coming from such diverse backgrounds, somehow gelled so easily together. We felt like family. I realize now how beneficial it was to let God’s will unfold according to His way and His time, and not according to ours. It was amazing to see the wonderful ways the Lord continues to work in His vast vineyard, through so many different, dedicated and uniquely talented people – if we only let Him. It was remarkable, and at the same time humbling, to see how grateful our African brothers and sisters were to us for coming to Tanzania. They expressed their gratitude through the joyous beat of their beloved drums and the rhythmic movements of their traditional dancing. Such sights and sounds will never be forgotten.

Amid such extreme poverty, I saw and shared in the innate joy of these beautiful people. I found a renewed sense of reassurance in God’s great and fathomless providence for all of His precious children. And I realized how vastly different God measures the true quality of human life; how His values differ from ours; and how contrary they seem when compared with the ways of the world: ‘For My thoughts are not your thoughts, nor are your ways My ways,’ says the Lord. ‘For as the heavens are higher than the earth, so are My ways higher than your ways, and My thoughts higher than your thoughts.’ [Isaiah 55. 8,9] May our Lord continue to bless the holy ministry of His Eminence Metropolitan Jeronymos, and all the faithful throughout the Church of Tanzania, for many, many years. And may He grant me another such opportunity to one day return to the wonderful people of Orthodox East Africa.