In Queens, Finding Refuge From Unrest in Egypt 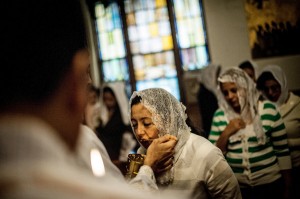 It’s Tuesday afternoon, and a few dozen of the faithful members of St. Mary and St. Antonios Coptic Orthodox Church in Ridgewood, Queens, are singing in the liturgy during observation of the Great Lent, the 55 days of prayer and fasting that precede Orthodox Easter, on May 5. The women wear white lace coverings over their hair, and smoky-sweet incense wafts through the air as the ancient melodies fill the icon-rich sanctuary. As at all services here, a screen projects the words being sung or spoken in three languages simultaneously: English, Arabic and Coptic.

Until recently, the screens had mostly helped the congregation follow along with the liturgical language, which few people know these days, and aided second- and third-generation Egyptian-Americans with weak Arabic skills.

But now they serve a new purpose: translation for the hundreds of new church members who do not speak a word of English.

Ever since the 2011 revolution that toppled President Hosni Mubarak of Egypt and ushered in the rise of the Muslim Brotherhood, Copts — Egypt’s Orthodox Christian minority — have been flooding out of the country and into the United States. The New York area has been a major gateway for these new arrivals, and churches in Brooklyn, Queens and Jersey City have had their rosters swell accordingly. Within a few months of the revolution, so many people had arrived from Egypt that the membership of St. Mary and St. Antonios had doubled, to about 1,000 families, and the church has not been quite the same since.

Walk into St. Mary and St. Antonios today and you’re more likely to hear people chatting in Arabic than in English. You see elderly women dressed all in black, as is the custom among Egyptian widows. “You feel much more like you’re in Egypt now,” said Father Michael Sorial, 36, a priest at the church.

The changes at St. Mary and St. Antonios are emblematic of how events on the world stage play out in the city’s ethnic communities. Just how many Copts have fled to the United States no one can say with certainty, since immigration statistics do not include religious affiliation. But the number of Egyptians seeking asylum has jumped since the revolution; in 2011, 1,028 Egyptians were given asylum — 4.1 percent of all of those granted asylum — up from 531 in 2010, according to the Department of Homeland Security’s Office of Immigration Statistics. With that increase, Egypt ranked fourth on the list of countries whose citizens were given asylum in the United States.

Walk down the streets around St. Mary and St. Antonios and you hear Arabic spoken and see Egyptians talking in local storefronts. The neighborhood of three- and four-story stone apartment buildings and vinyl-sided multifamily homes is in flux, a condition abetted by the many houses in the area listed in foreclosure and the new arrivals from Egypt who want to live close to where they worship.

For Copts in Egypt, church is more than just a place to go on Sunday mornings; it is the center of their social life outside the family. For Copts newly outside Egypt, the church is a familiar oasis in a strange country.

“It is our church everywhere,” said Gameel Girgis, a 36-year-old pharmacist who came to the United States in October to seek asylum with his wife and two children after his father-in-law, a priest in the central Egyptian city of Asyut, was stabbed to death. When he searched for a place to live, “my first consideration was distance from the church,” Mr. Girgis said, adding, “I want to raise my kids in the church.”

There has been a steady stream of Egyptian immigration to the United States since the 1960s, and St. Mary and St. Antonios has been a way station on the road to assimilation before. Many of its well-off, established members have long since moved to greener enclaves on Long Island and in New Jersey, but choose to journey several times a week back to the church they consider home.

The sudden tsunami of new arrivals after the revolution, though, was different from earlier waves of immigration; this one led to a complete reconstitution of area churches within a few short months.

In response, St. Mary and St. Antonios decided to revamp its ministry, moving squarely into the realm of social work. “My first week here I found one of the fathers visiting my home,” Mr. Girgis said of the church’s outreach.

Ashraf Aweeda, 45, a school counselor, is a coordinator for social services at St. Mary and St. Antonios, one of the many “servants,” as volunteers are called at the church. He’s helping oversee efforts that include shepherding new arrivals through school applications, applying for Social Security cards and Medicaid, and helping translate documents, write résumés and prepare for citizenship tests. The church refers asylum seekers to lawyers, and uses its network to help newcomers find houses and jobs. It provides tutoring for adults and children, gives courses in English as a second language and provides classes in cultural assimilation in which volunteers explain important differences in laws and customs, particularly those surrounding matters like child abuse, domestic violence and the approach to education.

Though the newcomers hail from across the socioeconomic spectrum, a good number of them are from rural areas, and they tend to be less educated and sophisticated than the Copts whose families have been in the United States for generations. It is not always an easy mix.

“Some people don’t accept them,” said Shahinaz Yacoub, 63, a part-time teacher who has lived in the United States for 32 years and volunteers at the church helping families with school-related matters.

Congregants accustomed to being welcomed by a sea of familiar faces on a Sunday morning now strain to find a friend in the crowd. Egyptian-Americans who speak little or no Arabic make their way past clusters of new arrivals whose friendly banter is nearly incomprehensible. Some area churches have seen members unhappy with a newly unfamiliar environment decamp to other congregations.

Caroline Labib Doss, 38, an immigration lawyer who specializes in Coptic asylum cases, had attended the Coptic Orthodox Church of St. Mark in Jersey City since she was baptized there as a baby. Recently, though, her family, along with about five others, decided to leave for another Coptic church where more of the members spoke English.

“I felt that my children weren’t fitting in anymore,” she said, explaining that now more people in the church speak Arabic than English. “It was difficult for them to communicate, understand and find fellowship with the other children.”

St. Mary and St. Antonios, for the most part, has avoided a similar fate. “We tried to pre-empt that,” Father Sorial said. “We started brainstorming: ‘What can we do so that people feel this is their home, whether they’ve just arrived or they’ve been here for years?’ ”

The church leadership focused first on getting the children from both groups to interact. Initially they put everyone together into the regular English-language Sunday school classes, but that didn’t work well at the middle school and high school levels, where the children tended to stick to those who spoke their own language.

To keep the Arabic-speaking students engaged in the church — some had started drifting away to smoke shisha on Steinway Street — they had to start Arabic-language classes; those youngsters are also asked to attend the English classes. “We don’t want a split in the community,” said Hani Ashamalla, 52, a radiation oncologist who oversees the high school Sunday school program. “We are trying to start with the Arabic and push them to the English.”

Progress has been slow, but it is coming. “With trips and activities, they are starting to mix,” Ms. Ashamalla said.

Emil Akhnoukh, 65, an engineer who runs the Sunday school program, said some congregants were complaining that the church is a noisier place than it once was. But he reflected a chorus heard often at St. Mary and St. Antonios when he said the church had a duty to aid the new arrivals. “What can we do? Leave our brothers and sisters dying in Egypt where they are killed?” Mr. Akhnoukh asked rhetorically. “This is part of Christianity.”