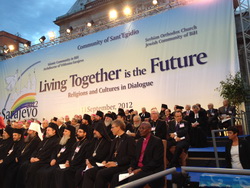 On 11 September 2012, the Interfaith Forum “Living together is the Future”, held in Sarajevo, completed its work. The Forum, organized by the Community of Sant’Egidio together with the Serbian Orthodox Church, Roman Catholic Archdiocese of Vrhbosna-Sarajevo, and Islamic and Jewish Communities in Bosnia and Herzegovina, gathered several hundreds of representatives of various religions from all over the world.

With the blessing of His Holiness Patriarch Kirill of Moscow and All Russia, the delegation of the Russian Orthodox Church took part in the event.

In the evening of 11 September, representatives of Christian denominations gathered in the square in front of the Roman Catholic Cathedral of the Sacred Heart of Jesus. His Beatitude Archbishop Chrysostomos II of New Justiniana and All Cyprus, the Primate of the Orthodox Church of Cyprus, celebrated a prayer service there. Praying with him were delegates of the Local Orthodox Churches.

After the prayer service, a solemn closing ceremony took place in the square in front of the Army House. Delivering speeches at the ceremony were prof. Andrea Riccardi, Roger Cardinal Etchegaray, Vinko Cardinal Puljic, Grand Mufti Mustafa Ceric, and other religious figures.

After that, the participants in the meeting adopted a joint statement – the Appeal for Peace.

Marco Impagliazzo, President of the Community of Sant’Egidio, completed the ceremony, traditionally announcing a venue of the next meeting: in 2013 the Forum will take place in the capital of Italy, Rome.