Intrigues in the Church: On the First Saturday of Great Lent – St Theodore the Tyro 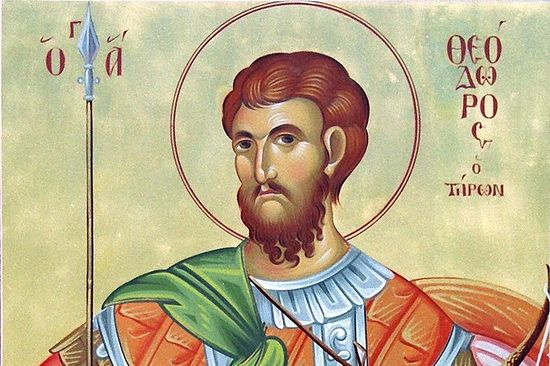 The first Saturday in Lent is observed as the Saturday of St. Theodore, in honor of the miraculous appearance of St. Theodore to the 8th Patriarch of Constantinople, Eudoxius, in the time of the emperor Julian the Apostate.

Although Julian had been raised in the Christian religion, he grew up in the imperial household in Constantinople and was surrounded by the intrigues, often murderous, that gave the term “byzantine” a special meaning when written with a lower-case “b”. Feeling that the Christians did not practice what they preached, Julian came first to doubt the Christian faith, and then turned against it.

One of the methods he hit upon to undermine Christianity, was to call back the heretical bishops who had previously been exiled, in the hope of dividing and weakening the believing flock. (This same ploy was used in modern times by the Bolsheviks when they encouraged the Living Church, the Josephites, Russian Baptists, and various others who opposed the canonical Orthodox Church).

About this time, Eudoxius also became Patriarch of Constantinople. Eudoxius had become a bishop by deceit, and advanced in the hierarchy by intrigue. He was also of the party of the Arian heretics. This is why the Synaxarion speaks of him as being “false and not Orthodox” (“аще и неправому и неправославному”, in the Slavonic version) when St. Theodore appeared to him.

One could ask the question: Why was St. Theodore sent to this heretic, rather than to some righteous and Orthodox, saintly figure?

Certainly it was not that “God is the same for everybody”, or because it does not matter what one believes: if that were the case, there would have been no reason for the people not to partake of the foods in the market, which had been dedicated to the pagan idols.

Was it to call Eudoxius to repentance, and to a confession of the true faith? At any rate, that does not seem, according to the history books, to have been the result.

The only explanation is that, since Eudoxius occupied the position of Patriarch of Constantinople, he was able to give directions to the flock that otherwise might have been much more difficult, or at the time, impossible to make generally known.

This was an example of “economy” — not through some decision of the hierarchy, but by the will of God, and despite the hierarchy then in place.

So on this day, we are presented with three images by the Church calendar: 1) the destructive effect of intrigues, backbiting, and backstabbing in the Church; 2) the use of “economy”, or seeming laxity, to keep the faithful from falling away from the Church; and 3) in the Gospel, the image of the Pharisees and hypocrites who looked for an excuse to revile Jesus.

In our day, we have no shortage of intrigues, especially at the very centers of Church life. Such intrigues tend to discourage and demoralize – and that is clearly in the interests, not of Church order, but of Satan who seeks to undermine the Orthodox Christian faith however he can, and especially to turn the servants of the Church against one another.

“Economy”, on the other hand, has been made an issue by certain zealots: they depict such cases of “lax and permissive” practice as a “betrayal of Orthodoxy”. But in reality the seeming laxness is not liberalism or indifference: it is a realistic effort to keep to strict an application of rules, or misguided zeal, from driving people away from the Church. And yet, those who preach greater strictness, usually want it to apply to others, rather than to themselves!

The conclusion we must draw, is that in all this, we are called to make our commitment to the Orthodox faith the basis of our lives: and neither to fall away ourselves, nor to behave in such a way as to discourage others, or drive them away from the Church.