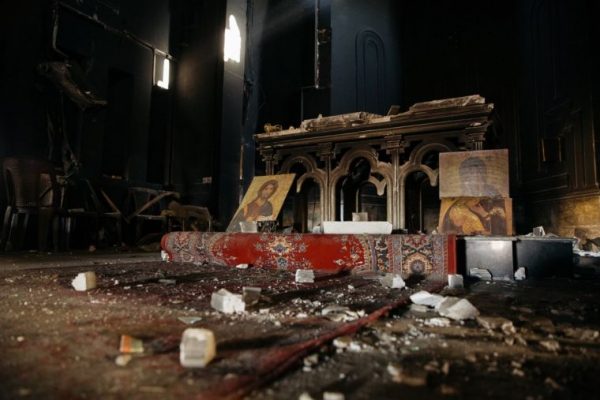 As members of St George’s Church in Bartella entered their church for the first time since ISIS was driven out, they immediately began to worship. 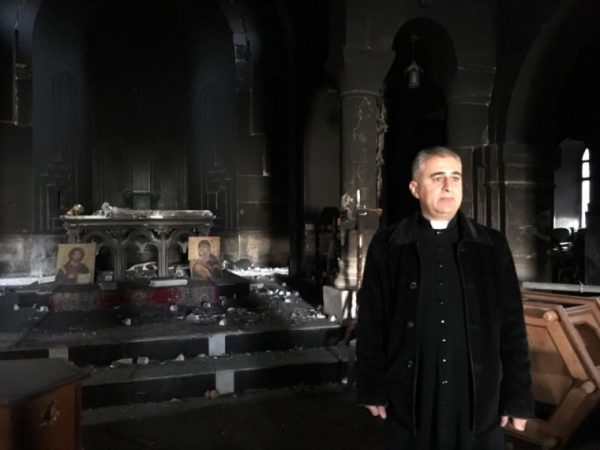 Father Benham in his church in Bartella.
Samaritan’s Purse

As they crossed the threshold to see utter devastation – crosses broken, windows smashed and the charred remains of the alter – they began to sing, which turned to prayer. Later, they wept.

Bartella lies just nine miles from Mosul – ISIS’ last stronghold in Iraq, and the subject of a major offensive to reclaim territory from the jihadist group.

More than 100,000 people have now fled the city as the battle intensifies, and Christian international relief organisation Samaritan’s Purse is working on the front lines to serve those in the midst of crisis. Partners are on the ground in the refugee camps and outside of them; providing food for 30,000 families a day along with emergency shelters and blankets.

Because although villages like Bartella have now been liberated from Islamic State, it remains unsafe for them to return home.

Executive director of Samaritan’s Purse, Simon Barrington, just returned from a visit to Bartella. In an interview with Christian Today, he described visiting the St George’s Church with its priest, Father Benham, and four sisters of the congregation.

“As we walked through the door of the church, it was incredible,” Barrington said. “I was very moved to see their response. They immediately started singing, then started to pray, and then started to cry – in that order. It was their first time back in that place of worship – no one had worshipped there for two years – and their immediate response among the ashes and the debris, with broken crosses and a noose hanging from the gates of the church, was to worship God.”

Barrington said he asked the Iraqis what they were singing. “We were singing songs of hope,” they replied. “We were praying to God to rebuild this church, and to come back here and recreate this Christian community.”

ISIS overran Bartella on 6 August 2014, and 5,000 families were forced to flee with just three hours’ notice. In October this year the Iraqi army reclaimed the village, but devastation remains in the jihadis’ wake.

It’s described as a ghost town; many buildings have been completely flattened and those that remain have been burnt out and looted. Other churches, too, have been destroyed. The Mart Shmony Syriac Orthodox Church in Bartella is left charred by a fire. When church leaders returned, inside the church pews were overturned, and hymn books and Bibles had been torn apart and thrown on the floor.

Across Bartella, some explosive devices have yet to be defused, making it impossible for residents to return home.

And yet, church leaders have pledged to return and rebuild the village.

“I was amazed by their determination and commitment to the people of Barterlla and the surrounding region; of their commitment to be a continued witness in that area,” Barrington said of Father Benham and the nuns.

“There are huge risks for them in doing that, but they were very determined.” 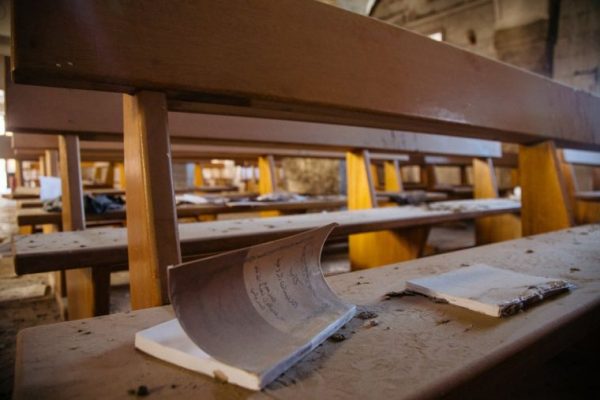 Some Iraqi Christians have said they are too afraid to return home after years of sectarian tension, but Barrington said Father Benham’s determination to return home was a “prophetic statement” to the wider community.

“It was leaders going back in and saying we will face up to this pain and hurt, to this devastation, and we will lead people through,” he said.

“There’s a deep sense of community – people don’t want to return until the churches function because church is at the heart of their community. Father Benham and the leaders of his congregation said once churches are rebuilt, the people will return.”