Source: Christian Today
Carey Lodge | 17 January 2017
Hundreds of churches and ancient Christian sites across Iraq and Syria have been desecrated by ISIS, but Muslims in the region are reaching out to their Christian neighbours amid the violence. 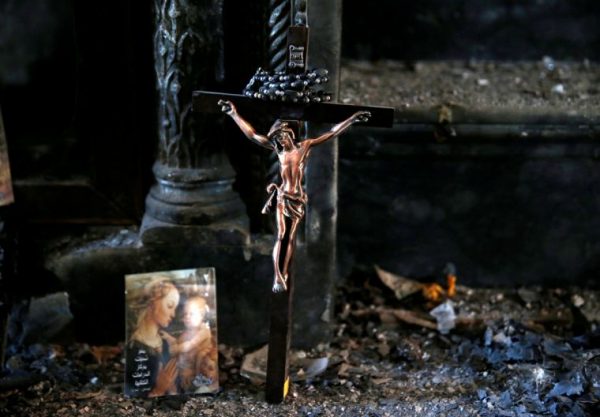 A crucifix inside the Grand Immaculate Church near Mosul, Iraq after it was recaptured from Islamic State in Qaraqosh. Hundreds of churches have been destroyed by ISIS/ Reuters

In a church in Mosul, one Muslim has rebuilt a cross after the building was destroyed by jihadis.

“Inside this church that ISIS has just come in and completely destroyed, here inside Mosul city limits, we found this cross that our friend Marwan helped fashion out of these two pieces of metal,” said Jeremy Courtney, co-founder and executive director of the Preemptive Love Coalition (PLC), a “faith-orientated” charity working in Iraq.

Speaking in a video posted to the charity’s Instagram, Courtney added:

“Marwan is a Muslim. But when Marwan came into this church he couldn’t accept the fact that these other guys who claimed to be Muslims were rampaging through this place, destroying the signs and the icons of his Christian friends, his Christian compatriots, his Christian neighbours.

PLC has been working in Iraq for more than a decade, and since the uprising of Islamic State in 2014 has provided life-saving emergency support to thousands of people fleeing the violence.

A team has also been to serve suspected ISIS militants under its mandate to “Love anyway”, regardless of religion or creed.

As the campaign to eradicate ISIS has ramped up in the last few months, videos and images have begun to emerge of Iraqi Christian leaders returning to their churches after having had to flee.

Photographs sent to Christian Today of the Mart Shmony Syriac Orthodox Church in Bartella, just nine miles from Mosul, showed church officials beginning the clean up effort after the building was desecrated by militants.

The church is charred from being set alight, and inside church pews were overturned, and hymn books and Bibles torn apart and thrown on the floor.

But though church leaders have pledged to return, many Christians are reportedly still too afraid and some have said they may never again live in what was once the heartland of Middle Eastern Christanity.