Is Orthodox Christianity Stuck In The Past? 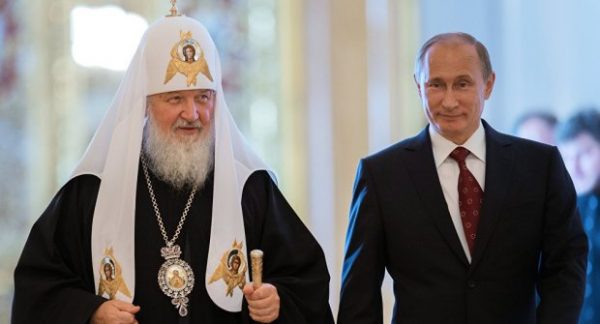 In a recent essay for the Bloomberg View, Leonid Bershidsky attempts to explain why traditionally-Orthodox countries “remain stuck” in the anti-capitalist, anti-Western, and authoritarian mindset characteristic of the communist era. Drawing support from a new World Bank working paper, Bershidsky locates the source of this mindset in supposed theological differences between Eastern and Western Christianity. He argues that post-Soviet Eastern Europe’s slowness to adopt capitalism and its penchant for authoritarian leaders is not explained by its communist legacy but by its Orthodox Christian heritage. His conclusion is that traditionally-Orthodox cultures “aren’t really comfortable in a Western-dominated world,” a problem that can be “mitigated” but not “removed.”

Unfortunately, Bershidsky’s analysis remains stuck in an obsolete “clash of civilizations” narrative that obscures more than it enlightens. The insinuations of irrationality and irredeemable primitivism (as if reason dictated that those outside the West should be comfortable in “a Western-dominated world”) are the hallmarks of a (neo)-colonial outlook that thrives on civilizational divide. That Bershidsky is able to muster “Eastern” scholars who affirm such a divide is little more than an affirmation of the pervasiveness of the hegemonic discourse of Western superiority.

To be clear, the problem with Bershidsky’s analysis is not that it is entirely baseless but that it distorts the truth by telling only part of the story.

It is true that some features of Orthodox theology do not easily map onto capitalist ideology and that some of them provided fertile ground for communism. As Bershidsky recognizes, Orthodox political theology has often been strongly communitarian, skeptical of rationalist legal order, and reliant on the benevolence of autocratic rule. In Bershidksy’s native Russia, for instance, the influential Slavophile movement of the 19th century praised the Russian peasant commune as the highest expression of Orthodox social principles and even made it a basis for their model of the Church (the notion of sobornost’). The Slavophiles’ ideal Orthodox society was not only explicitly anti-capitalist, going as far as to ground all property ownership in social obligation, but was critical of the “rationalist” culture of legal relations standing behind the Western capitalist order, even to the point of investing all political authority in the autocrat out of fear that a society based on legal rights was antithetical to Orthodoxy.

But it is wrong to take an example like Slavophile political theology as evidence of an unbridgeable divide between a capitalist West and the Orthodox East. After all, Orthodox anti-Westernism is often surprisingly Western: Slavophile communitarianism and preference for “organic” versus legal-rational social order, for example, is indebted to Western romanticism and hardly unique to Orthodoxy. Moreover, the “Western religious tradition” that Bershidsky identifies as facilitating the rise of capitalism is really (as in Max Weber’s thesis) a particular form of modern Calvinism, not Western Christianity as a whole. Western Christians have their own long history of critiquing capitalism, and if there are some genuine tensions between Orthodoxy and the dominant capitalist order, the same is true of Roman Catholic theology as well, as Pope Francis (like all of his predecessors) have been at pains to explain to the world. Rather than taking pro-capitalist theology as normative, we must consider whether at least some of the tensions between capitalism and Orthodoxy are really tensions between capitalism and Christianity, even if many in the West (including Christians) no longer realize it, and even if the tensions do not ultimately preclude the possibility of fruitful dialogue between the two.

Not only does Bershidsky’s essay risk conflating “Western Christianity” with pro-capitalist theology, it also ignores the diversity within the Orthodoxy.

The Orthodox world is not homogeneous, and even the Russian theological tradition by itself is far more diverse than the essay makes apparent.

Whatever resonances might exist between Soviet communism and certain streams of Russian Orthodox anti-capitalism, it is vital to recall the outpouring of anti-Marxist Orthodox political theology in the years surrounding the Russian Revolution. Orthodox intellectuals like Sergei Bulgakov and Nikolai Berdyaev are known for their trenchant critiques of Russian Marxism and for their commitment to Orthodoxy’s communitarian social principles. Far from being mere reactionaries, such figures brought Orthodox theology into dialogue with modern Western economic and political thought. They showed that, on the one hand, Orthodoxy need not remain stuck in the past and that, on the other hand, Orthodox theology might have legitimate criticisms to make against a capitalist order that does not always do justice to the sacred dignity and freedom of persons entailed by the Orthodox notion of divine-human communion. Rather than deference to Western capitalism, which is what Bershidsky seems to want, thinkers like Bulgakov and Berdyaev point towards the possibility and necessity of Orthodox theological engagement with Western thought. Such engagement serves as a reminder that Orthodoxy need not be opposed to every aspect of modern Western economics, but that Christianity should not simply be capitalism’s handmaid either.

The real problem, though, is not that what Bershidsky is saying is inaccurate, it’s that it’s dangerous.

Since communism collapsed in the Eastern Christian world, powerful political figures such as Vladimir Putin have exploited Orthodox theology, including Orthodox critiques of Western society, to bolster a narrative of intractable East-West civilizational conflict for their own political gain. Russian Church documents such as the 2008 statement on the Church’s Basic Teaching on Human Dignity, Freedom, and Rights that question the compatibility between Orthodox communitarianism and Western individual rights play into this conflict narrative. But so do accounts like the one Bershidsky offers, which presumes Orthodoxy as a whole to be inherently backward, too fearful of change to respond rationally to the obviously-superior Western capitalist order. Why, after all, should we expect Orthodox cultures to seek warmer relations with the West when Western media itself suggests that to be Orthodox and to be Western are irreconcilably at odds?

The prevalence of essays like Bershidsky’s highlights the need for initiatives like the forthcoming Luce-funded research project on Orthodoxy and human rights hosted by Fordham University’s Orthodox Christian Studies Center. Most Americans, even Christians, are largely unfamiliar with Orthodox Christian history, theology, and culture. What they need are not more articles on how Orthodoxy is to blame for current geopolitical tensions. What is needed is greater public awareness of the diversity of Orthodox responses to modernity: not a denial that Orthodox theology has played some role in East-West tensions, but a recognition that there are also other streams of Orthodox theology that are more amenable to Western social thought, even if they might also illuminate some of the shortcomings of modern Western societies and remind Christians that the global triumph of “the West” is not the same thing as the coming of God’s Kingdom.