"The Russian Orthodox Church is open for people, sufferings and injustice, and ready to help where the help is needed,” the Patriarch noted.
Natalya Mihailova | 03 February 2018 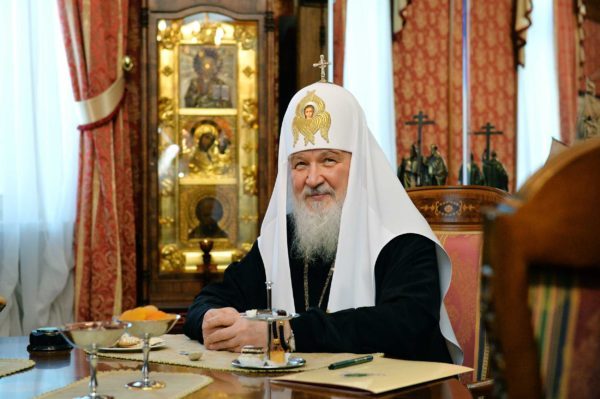 An event dedicated to the ninth anniversary of the Patriarch’s enthronement took place at Christ the Savior Cathedral in Moscow. His Holiness, Patriarch Kirill of Moscow and All Russia, delivered a speech during the event, in which he reminded those present that the Church’s mission was to help people.

“It is crucially important that the episcopate and the clergy testify to the modern Russian Orthodox Church being open for people, sufferings and injustice, and ready to help where the help is needed,” the Patriarch noted.

His Holiness, Patriarch Kirill, mentioned, “Since the Byzantine empire, clergymen have been dressed in appropriate clothes and judging by external appearance, our critics sometimes say, ‘look at the church it is set in gold’.” The Patriarch reminded those present that such clothing is supposed to symbolize an external connection between the Church, the “great Byzantine tradition” and the great Christian teachers.

The Russian News Agency has reported that the Primate of the Russian Orthodox Church encouraged clergymen to continue helping residents of Donbass, where “the fratricidal conflict” is taking place, and to help those who need it.

“This is the goal of our social work. I will never tire to repeat that such activities, speaking in the modern language, are simply good deeds, which are just well organized. I hope to God that such mission of the Church, including peacekeeping mission, the mission of supporting the fragile and the sick, the youth, our families, and other sides of church life, will develop not merely because the Patriarch said so, but because the Divine Providence shows us this path,” His Holiness, Patriarch Kirill, stressed.

Among those who came to congratulate the Patriarch were the Russian President Vladimir Putin; Dmitri Medvedev, Government Chairman of the Russian Federation; Valentina Matvienko, Head of the Federation Council; Vyacheslav Volodin, Head of State Duma; politicians, metropolitans, hierarchs, and representatives of Local Orthodox Churches, synodal institutions, abbots of stavropedic monasteries, the clergy, and representatives of government and social organizations. 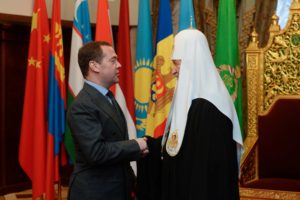 Traditionally, the Primate of the Russian Orthodox Church encouraged those present to make a charitable contribution instead of giving presents in celebration of the anniversary of his enthronement. The received donations were spent on purchasing an ambulance for the Central Clinical Hospital in honor of St. Alexis.